PERTH AMBOY – A city of wrought iron fire escapes hugs the waterfront to east of the highways, where in a banquet hall behind the ZPA Cocktail Lounge on Saturday night, U.S. Rep. Rob Andrews goes from table to table with Assemblyman John Wisniewski (D-Middlesex).

The 100 people here representing the United Poles in America ZPA embrace Wisniewski as one of their own, the powerful chairman of the Assembly Transportation Committee, who grew up among them in Sayreville, and who’s represented them for over 12 years.

On the occasion of the 55th anniversary of the fraternal organization’s Polish supplemental school, they forgive him his lack of fluency in the mother tongue.

"My parents used the language in a way that wasn’t the best for my brother and me," the grand marshal of the 2006 Pulaski Day Parade tells the crowd in a room overhung with balloons. "They would talk to each other in Polish when they were deciding what our punishment would be."

The crowd laughs. They love him.

Coming off the handshake with Wisniewski, Andrews at the podium tells the crowd that no group has done more for America than the Polish, beginning with their service in the Revolutionary War, their active role in defeating Hitler and their efforts during the Cold War.

He pays homage to the efforts of the supplemental school.

"We never want to live in a America where we define ourselves by our differences, but where we celebrate our diversity," he says.

He gets polite applause, and is one in a long line of speakers, most of whom use their time at the podium to speak Polish among fellow Poles.

Calling him "the future of the Democratic Party," Wisniewski and fellow Middlesex County legislators Sen. Joseph Vitale and Sen. Barbara Buono were among the first elected officials to endorse Andrews. In the days following the South Jersey congressman’s entry into the race, the political establishment waited to see what northen county organizations would back him.

But Andrews looks to capitalize on Wisniewski’s popularity here in this northern working class stronghold where he needs votes, as well as on the assemblyman’s close ties to labor and his political organizing skills. Chair of the Democratic Party in his hometown of Sayreville, Wisniewski "is that rare breed who is a policy expert as well as a skillful politician," Andrews says.

A vocal critic of Gov. Jon Corzine's unpopular toll roads hike plan, which Lautenberg also does not support, Wisniewski says he does not think Andrews's endorsement of the plan would play in the senate primary.

"A lot of people early on said we should do it," the assemblyman says of the governor's plan. "Had the governor not thrown it on the table, he would not have recognized that he will need a much more scaled-down version."

Vitale’s and Wisniewski’s endorsement of Andrews is counter-balanced by Perth Amboy Mayor Joseph Vas’s support for Lautenberg in this 19th Legislative District where Democrats outnumber Republicans by well over 3-1. At 7,309, Poles, Russians and Slavs make up the district’s fourth biggest ethnic group of registered voters after Brits and Irish (22,139), Latinos (18,008) and Italians (10,238).

Many of the roughly 2,000 people strongly affiliated with United Poles in America ZPA have their roots in Perth Amboy, and send their children to the same ZPA cultural school they attended. Having immigrated to Perth in the 1950s, most of the Poles relocated in Sayreville, South Brunswick, Old Bridge, East Brunswick and other area towns by 1979.

"The Polish community is not as strong as it was once in Perth Amboy," says Walter Szuba. "But this organization is keeping people together. The thing about John, whom I’ve known for 20 years, is he represents all the people, not just the Polish. He’s good with every ethnic group."

Edward Pierwola, who grew up here and now lives in Princeton Junction, says a lot of the people in his community face burdensome college tuition costs, in addition to high taxes.

Although they don’t know Andrews – "We were quite surprised to learn he was coming tonight," says organization president John Klajin – the congressman’s leadership role in authorizing President George W. Bush to go to war in Iraq proves no big issue, at least as far as Klajin is concerned.

"I’m a veteran," he says tersely. "I think everyone should serve their country."

Children from the supplemental school perform poetry and songs, all in Polish, and as he excuses himself from the head table of dignitaries and heads for the door later in the evening, Andrews says he feels energized.

"I started this day with a flea market in Bellmawr, spent time with the students of the Robert Treat Academy in Newark, did a fund-raiser in Somerset, this – and we’re not done," says the congressman on his way to a fund-raiser to fight breast cancer in Deptford.

"It’s more and more evident when you tell people that you’re new, their eyes light up," he says.

Earlier in the day, U.S. Rep. Bill Pascrell (D-8) told PoltickerNJ.com that Andrews failed to keep his word not only to Lautenberg but to Pascrell personally when he told his congressional colleague that he wouldn’t run for the U.S. Senate in this year’s Democratic Primary.

"My understanding was the senator was going to run a campaign that would inspire the people," Andrews says. "The hunger the people have for change is pretty obvious."

The man from Camden County may not inspire this group in the particular way that Wisniewski does, but Andrews hopes Wisniewski’s good word here among the Polish faithful will translate into votes come June 3. 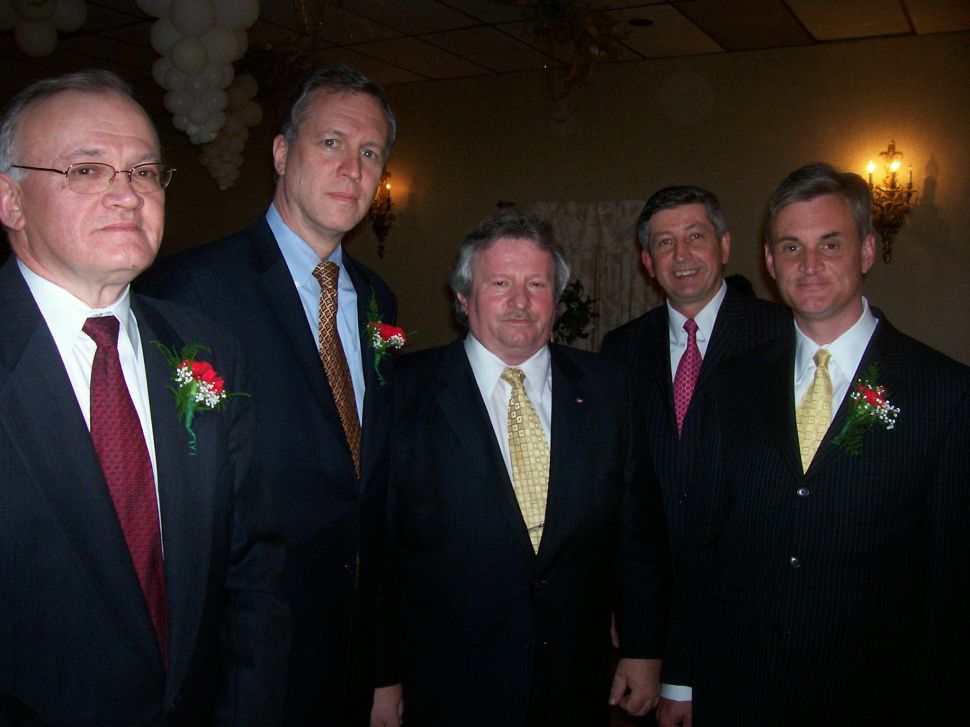