NEWARK – He says he’s the fighter who never forgot down deep that he’s working class, and on the last Friday before Election Day, Sen. Frank Lautenberg (D-NJ) headed to the docks to collect the endorsement of members of locals aligned with the International Longshoremen's Association, AFL-CIO (ILA).

"Like you, I have an attachment to a union, only it was through my father," the senator told the crowd of over 200. "My father worked in the silk mills of Paterson, like his father did and his uncle and his brothers. And they tried their best. They tried their best… to get a union, and got beat up but eventually it happened."

The workers here handled $100 billion in goods in 2003 and unloaded 2.6 million tons in 2006. At this the world’s second busiest cargo terminal, the cheers come with any mention of a union fight and with every exhortation to be number one.

Moments before the senator arrived, two trailers disgorged the longshoremen at Port Newark’s Berth 25 and they trudged forward, filling up part of the pier while shaking blue Lautenberg signs, waiting for the man and when he arrived finally,striding up onto a platform in suit and tie with labor brass on his heels, the men called, "Frankie! Frankie!"

Facing those men and some women from the locals of the largest union of maritime workers in North America, Lautenberg vowed to win for them.

"If you’re with me," he told the union members, "I’m going to continue to serve you and be proud of everything I do on your behalf, and proud of you, the people who do the lifting to make sure the cargo passes through, generates income, who take care of our country and yourselves."

On the same afternoon, the campaign of Lautenberg’s chief rival, U.S. Rep. Rob Andrews, unveiled an attack ad in Trenton outlining how the father of a Marine killed in Iraq had felt spurned when he tried to approach Lautenberg and then found comfort when he met with Andrews.

His opponent was also reveling in his own radio debate performance the preceding evening, particularly when contrasted with Lautenberg’s effort.

"Sen. Lautenberg's angry, evasive and inarticulate performance clearly demonstrates why he waited until the final weekend of this campaign to debate. Frank Lautenberg denied New Jersey's Democratic voters their right to a series of debates on the serious issues we face. Now we know why."

But on Friday, Lautenberg was happy here outside at Port Newark in the blue collar crowd hours before his second and last debate, on television, and the workers appeared happy on their break to welcome him.

With the water, and the Bayonne Bridge in the distance over his shoulder, which he promised to help raise to get more ships into the harbor, and the men and razor wire protecting the pier and Newark Bay Bridge curving over the Hackensack into Bayonne, Lautenberg told the longshoremen he would continue to fight for New Jersey against the "failed policies" of the Bush administration.

"There’s a two-mile stretch between the harbor and the airport that is a most attractive target for terrorists and we don’t want to let them get here," the senator said. "That’s why I insisted we get our fair share of the money to fight that risk. …that’s why I insisted that we maintain our own rigid standards for chemical safety in the face of weakening by the Bush administration."

To repeated applause, he noted his fights to stop the war, to preserve the State Health Insurance Program (SCHIP) for thousands of New Jersey children, and to get the federal government to reimburse families who have had to pay out of their own pockets for body armor to shield their soldier sons and daughters in Iraq.

"I’ve been involved in politics a lot of time and I’ve seen politicians come and go," said Leonardis. "Some of them you take with a grain of salt and some of them just don’t get it. Well, this guy here, he gets it."

Payne cited his and Lautenberg’s commitment to occupational safety. A couple of hours removed from a fatal crane collapse in New York, the congressman spoke of the hazards of businesses rushing work while failing to secure protection for their workers.

Payne told the longshoremen he was with them.

"I love this place," he said. "I worked down here from 1952 to 1956, on Doremus Avenue, where they used to have about one ship a week, believe me. The old days. But we’re so glad to see this port come to where it is today. I’m with you, I’m with Frank. Let’s put him over the top."

Earlier, at one point during the senator’s speech, handfuls of longshoreman started leaving, waving at him as they departed.

"We’ve got to go back to work, Frankie," a few of them cried.

When Lautenberg was done, he waded into the crowd and they engulfed him, longshoremen and reporters; and among them, former middleweight boxing champion Vito Antuofermo, who once went 20 rounds with Marvin Hagler and now works on the docks, shook the senator’s hand.

Lautenberg wanted a picture with him.

"He’s our champ," said another man, a longshoreman, whose face was scarred, staring at Antuofermo as the old senator and the old boxer sized each other up and Lautenberg exclaimed, "Vito!" 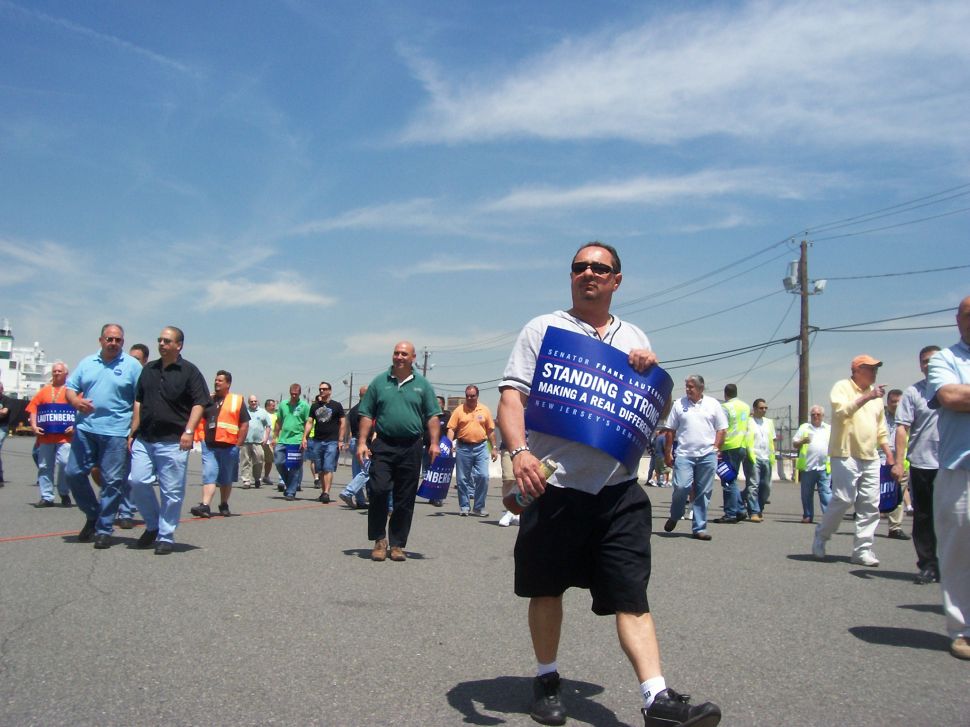