WOODBRIDGE – U.S. Sen. Frank Lautenberg (D-NJ) wasn’t supposed to face a primary opponent, and when he did, few were as irked as U.S. Sen. Charles Schumer (D-NY), chair of the Democratic Senatorial Campaign Committee.

In the months preceding U.S. Rob Andrews’s challenge of Lautenberg, Schumer saw the elder statesman bringing in big donors and positioning himself to make a convincing stand come the November general.

Andrews’s entry into the race was at best a headache for Schumer because it meant Lautenberg would have to spend money in a primary – maybe a lot of money.

With McCain at the top of the ticket and competitive here against Obama but the Republican Party otherwise in shambles after Bush, Schumer didn’t want to have to worry about New Jersey. There were other opportunities for senate seat wins, enticing red-to-blue prospects – namely in Alaska, Colorado, New Hampshire, New Mexico, Virginia, and Maine. Schumer didn’t want to have to look at Lautenberg until Nov. 5th, let alone spend money on him.

Menendez did what he could, which was considerable: going straight into Bergen County with U.S. Rep. Steve Rothman (D-9) and short-circuiting a deal between South Jersey Democratic leader George Norcross and Bergen boss Joseph Ferriero. Along with Rothman, the remaining Democratic congressmen united in their public support for Lautenberg and pledged to run on the line with him in their respective north and central Jersey districts.

Iraq and age and Iran…and Iraq

Those were big wins for the incumbent, coming even as Andrews was already having other troubles early on the issues front. Every time he opened his mouth and tried to talk, Lautenberg’s people smothered Andrews with Iraq.

He tried to talk about debates and the opposition hit him with Iraq. He tried to talk about energy costs and Lautenberg family oil company stock and again: Iraq. Little known statewide, Andrews was becoming synonymous in the public political consciousness with arguably his worst moment in a 19-year congressional career.

Andrews tried to return fire, making the case that Lautenberg himself had publicly backed Bush on the war. But it didn’t neutralize the issue, for there existed what for Andrews was that real and heartbreaking distinction between Lautenberg’s public declaration of support for the war versus the congressman’s co-sponsorship of the Iraq War resolution.

In possession of some solid endorsements but running behind the 84-year old senator by double digits in a Bergen Record poll with two weeks left in the campaign, Andrews, 50, decided to go directly to the age issue. Last week he released a TV ad with a picture of the late U.S. Rep. Millicent Fenwick’s face accompanied by the reminder that Lautenberg had injected the age factor into his 1982 match-up with the congresswoman.

That answered the question about whether or not Andrews would go negative. The question now becomes whether in his final week’s worth of advertising Andrews continues to batter Lautenberg on his age – and amplifies the argument by introducing in ads what he describes on the trail as a real possibility that the GOP will use the fear card in a general election.

His opponents might describe the tactic as the ultimate un-Roosevelt like campaign act of fearing fear itself, but Andrews maintains that the Republicans will not go gently in Jersey.

"Every couple of weeks the administration tries to blow out of proportion a naval incident," to implicate Iran, Andrews says. "If you look at their history – the way they beat up Max Cleland in 2002, and their use of the Bin Laden tape against Kerry in 2004 – I expect them to do something like that again, and I wouldn’t doubt their attempts to Gulf of Tonkinize Iran in an election year."

Lautenberg sleepwalking into that general election atmosphere won’t serve the party, Andrews argues. "You can’t fight back against this Republican attack machine by running a campaign in absentia," he says.

Should he decide to refrain from staying negative, there is another advertising option for Andrews’s final days.

Of labor and bosses

He can articulate another distinction that he regularly highlights on the campaign trail: his and Lautenberg’s differences on some recent trade agreements.

Maybe packing less concussion than the age-fear argument, it nonetheless makes a case to a divided – and important – labor vote.

When Andrews entered the race, the AFL-CIO decided to remain neutral after initially supporting Lautenberg – a fact that Andrews proudly underscores often. Now Andrews could attempt to break that standoff with an aggressive appeal.

The candidates’ ratings from the AFL-CIO are almost interchangeably high, and both men voted against the NAFTA (North American Free Trade Agreement). But while Andrews against China and Peru trade agreements that in the congressman’s view mirror the damaging provisions of NAFTA, the senator voted "aye" on both counts.

Particularly troubling, in Andrews’s view, was Lautenberg’s vote on the U.S.-China Relations Act of 2000.

"I think this was a classic case of whether you’re for corporate America or whether you’re for the middle class," says Andrews. "As a consequence of that agreement, New Jersey lost 125,000 manufacturing jobs and maybe as many as 200,000."

The Lautenberg campaign stands by the senator’s votes.

"Sen. Lautenberg believes the Peru agreement had strong labor and environmental standards and was good for New Jersey," says Lautenberg spokeswoman Julie Roginsky. "We have a thriving Peruvian community in our state, and promoting trade with Peru will help New Jersey.He supported normal trade relations with China because it required China to join the WTO, which is critical. We needed to make China subject to WTO rules, so we have some real leverage if they engage in unfair practices."

As Lautenberg’s team simultaneously looks at the end-game, they can continue to hammer away at Andrews’s hawkish stances on Iraq, ratcheting up their assault on the congressman’s war backing and leaving that single, potentially fatal image out there of Andrews as a Bush cheerleader.

Another tack is to play up the link between Andrews and boss Norcross as part of a bigger case for Lautenberg’s independence. The senator does not come out of the bowels of a political organization like Andrews, with all of the associative factors connected to a man who rose to power with the backing of a boss.

Andrews jokes about being a regular guy up against the millionaire – the underdog with a small bank account bucking the system – but in this case the millionaire has the advantage of being self-made. Indeed, one of the reasons key bosses – Ferriero, Adubato and Norcross – tried to join forces here was because Lautenberg never felt obliged to kiss rings.

Now Andrews’s people depict the relationship between Norcross and the congressman as symbiotic, and often volatile.

They came together to get Fred Madden elected to the state Senate in what Andrews today describes as a true alliance after several years of bad relations. But Andrews allies continue to stoke bad blood stories, apparently to nullify the idea that Andrews is overly dependent on Norcross. In fact, one theory for this current campaign is that Norcross fooled Andrews, using Tom Byrne to bait the congressman into challenging Lautenberg, then leaving Andrews out there in the arena so he could at last get him out of the federal seat he’s held for 19 years.

"When you get emails at 4 in the morning, you know someone is working for you," Andrews says. "As far as I can tell, George is doing nothing but working for the campaign night and day. Those suggestions are hurtful and insulting to George."

But the boss factor nags at the Andrews campaign, and Lautenberg could exploit it if the senator feels the Iraq issue hasn’t already sufficiently hobbled his opponent’s campaign.

The primary war goes on: Lautenberg standing at podiums in D.C. in statesman fashion, hurling more blue state meat into the maw of June 3 and keeping a blitz of emails and ads going, and Andrews making the rounds on the ground, pumping a stream of youtube videos onto the web and inundating Middlesex, Passaic, Bergen, Essex and Union with campaign lawn-signs.

In typical contrast, Andrews walks through the Woodbridge Community Center in this north Jersey city, talking to third and fourth graders participating in an after-school program, even as the Lautenberg team sends out an email blast noting Lautenberg’s recent legislative accomplishments.

In Woodbridge, it is difficult to pass through a public building without being reminded of the fact that James McGreevey once served as mayor. Embossed everywhere, his name stands over Andrews now in the community center, and is a difficult presence not to acknowledge given the congressman’s torturous loss to McGreevey in their 1997 run for governor.

"I don’t think I campaigned here in ‘97," Andrews says with a laugh. But he is now, trying to run up against Lautenberg’s northern stronghold with pockets of support he’s built over the last five years.

"This campaign isn’t a cold call," he says.

Lautenberg’s team laughs at his earnest persistence. As Andrews talks at a Montclair Town Hall forum attended by about 50 people, including a sizable smattering of Newark North Ward Center allies, a Lautenberg person says, "good, keep him there. As long as he’s out talking to little groups like that, taking time, we’ve got him pinned down."

An Andrews remark about energy elicits a pitter-patter of hand claps that never ignites into outright applause before an elderly woman haltingly invokes Jimmy Carter in her question. The name prompts an inadvertent head roll of discomfort from Andrews, as it would from any politician in an uphill election in a room beyond home turf where the atmosphere is already hardly electric and Carter is code for political failure.

Yet Andrews keeps talking as if he’s in a fight and the Ledger liked what he has to say enough to endorse him, and Lautenberg keeps fighting back, and what Schumer didn’t want in New Jersey’s Democratic primary season at the very least is what he's got eight days out: a fight. 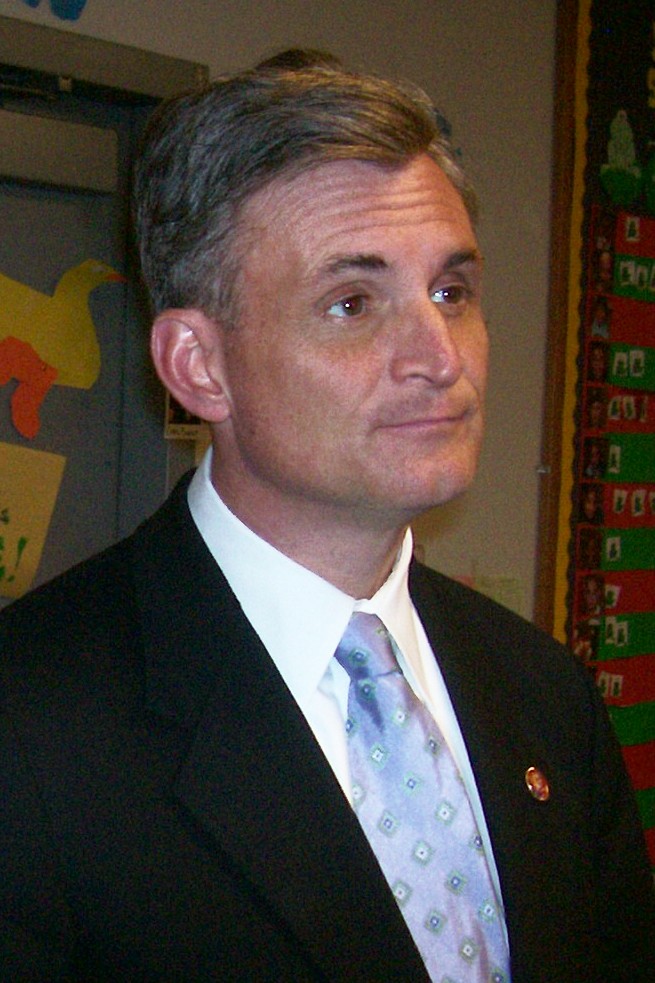