ORANGE – A few Orange city blocks separate the campaign headquarters of Donald Page and Eldridge Hawkins, but a wide gulf of emotion opened up after 9 p.m. when the results of the mayor’s race came down from City Hall and Hawkins won.

In a six-way race, Hawkins defeated Page by a margin of 30-27%, or 1,061 to 942 votes, to deal a heartbreaking loss to the forces of the long-serving councilman.

"We did it," said a jubilant Hawkins, surrounded by family and supporters, including state Sen. Richard Codey (D-Essex) in his campaign headquarters behind Sandwiches Unlimited on Center Street.

"He was a great candidate," said Codey, an Orange native who backed the 28-year old West Orange patrolman amid controversy about the candidate’s short-time residency in Orange.

In what proved a good night in the Oranges for the former governor, Codey's candidates also swept away their opposition in West Orange council races.

Hawkins burnishedseveral endorsements, including that of Mayor Cory Booker, but it was Codey, in the words of a dejectedPage supporter on Tuesday night,who proved that his name IDremainspowerfulin his birthplace.

Fearing a Codey takeover of the city through Hawkins, Page supporter Nicole Williams said residents canonly blame themselves for notvoting in greaternumbers,in a mayoralelection in which 3,483 of 10,649 registered voters made it to the polls.

"He lacks experience," Morrellconcurred of the winner. "But I do believe we can come together for the good of Orange."

In the aftemath of Mayor Mims Hackett, the young Hawkins ran on a message of change.

"I simply told the truth, what we could do and what we could bring to the city," said Hawkins. "We got support from every part of the city, every nationality: Latino, Hispanic, Italian community, Irish and everybody."

From the start, Page targeted his opponent as an outsider.

"This is the Democratic Party machine sending their candidate in here to run this town," he said.

His yellow t-shirted supporters maintained high visibility all day on Tuesday, working the cross streets in mini-vans covered with Page signs and making last minute sidewalk contact with voters outside of polling places.

Running on a record of voting against tax increases and what he saw as exorbitant tax abatements for developers, Page had hoped to succeed his political enemy, Hackett, who last year was busted by the feds on corruption charges.

"Vote for the experienced candidate," was the message from billboards and bullhorns, but finally that message broke up against the vast edge that Hawkins had in money and political muscle.

In the end, the Hawkins campaign said their targeting of key voting districts, robocalling, and aggressive mail campaign proved the difference as their candidate beat Page.

"I told you we had the seniors," said Eldridge Hawkins, Sr., father of the winning candidate.

Codey, who himself defeated Page when the councilman challenged him off the line in 2001, focused on Hawkins’s performance.

"He was better than I thought, better than a lot of people thought," said Codey. "He worked his butt off and he never complained."

Hawkins had the lead by about 150-200 votes heading into the last four of 17 total voting districts. While encouraged, the Hawkins campaign dispelled any early celebrating. Two of the remaining districts were in the North Ward, where Page lives, and where several of Orange’s seven senior buildings are concentrated.

In those remaining districts, Hawkins kept pace with Page and held onto his lead. Where Hawkins beat Page by a considerable margin – raising eyebrows in the councilman’s camp about exactly how their newcomer rival pinpointed and scored those votes – was in the city’s East Ward.

Page put in a long day, voting at the YMCA at seven in the morning, and then driving throughout the city in search of voters, paying particularly close attention to the South Ward, which is on the opposite side of town from where he lives and served as the North Ward councilman for years.

Page arrived at his campaign headquarters on Essex Avenue at 8:15 p.m. to a wave of applause from his campaign workers, who spilled out the front door onto the sidewalk.

An hour later they were crushed, and Hawkins was victorious. 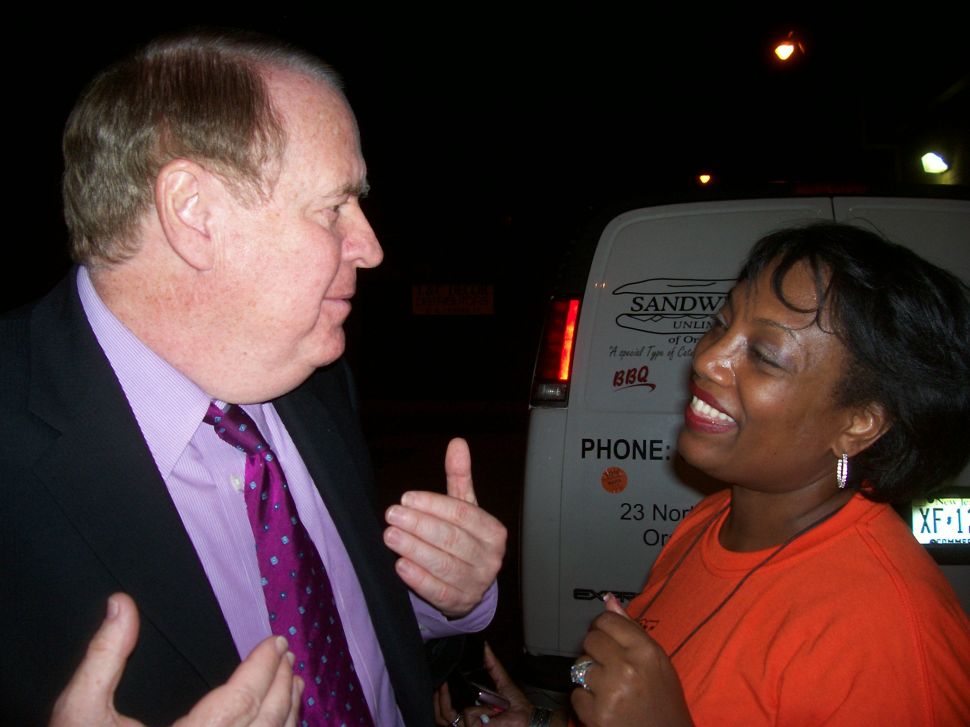