Her opening salvo provided only temporary cover from Kafton’s return fire, which the challenger appeared to relish – and which also appeared to galvanize Ingram – sparking a charged-up back and forth that a fatigued senior citizen at the microphone finally called disappointing.

That prompted applause from the crowd of 50 seniors.

But it didn’t diminish the rift between Kafton and Ingram, which mostly stems from their starkly contrasting opinions about who’s saddled the town with mismanagement and tax hikes: the Democrats and Kafton, who were in power pre-Republican Mayor Mark Seda (Ingram’s view); or Seda and his GOP allies, including Ingram (Kafton’s view).

A former mayor and lifelong town resident, arguably Jackson’s most recognizable Democrat, Kafton tried to paint his past service on what was then thetown committeeas a better time for this Pine Barrens town, the pre-Seda salad days during which public officials sprayed gypsy moths dead and stabilized taxes.

Later he would attempt to do damage to the opposition. In the meantime, Ingram went to the microphone – and started swinging.

"He wants you to believe that he stabilized taxes," the councilwoman said. "The truth is, during his six years, spending increased to 70%. His administration refused to pass the 2006 budget. There were tons of areas of mismanagement. People collected health benefits, some of whom no longer worked for the township, some of whom were deceased."

Ingram objected to Kafton’s boast that he saved 300 acres of open space, pointing out that the township saved just over 209 acres.

Kafton fought back, tying Ingram to an unpopular mayor, whose record includes the destruction of scared two incumbent Republican councilmen away from pursuing re-election with Ingram.

"I spent my own money in a campaign because I didn’t want to be bought," Kafton said. "The township attorney (Ocean County Republican Chairman George Gilmore) in 2007 was paid $453,000. Why? Because they’re paying back the attorneys and engineers who made the contributions to their campaigns."

Ingram was vigorously shaking her head no, but Kafton persisted, blaming Seda – and by extension the Republican council, including her, for losing 19,000 acres to gypsy moth destruction when they didn’t spray. Kafton also tore into the GOP for presiding over a 32% tax increase.

He sat down looking as though he wanted to keep going – "I’m on a roll here," he said – but Ingram was up again.

"They refused to pass this budget because they knew what was in there," said the councilwoman, a certified public accountant, who continued her argument that Jackson’s present fiscal crisis can be traced to Kafton’s time in office.

When she looked at the 2006 budget that Kafton and his allies didn’t pass in an election year, she was astounded, she said, to discover that Jackson had an unpaid tab of $650,000 in union back pay.

"He’s tying me in with the mayor," Ingram said. "I have not agreed with everything the mayor has done."

Ingram’s and Kafton’s running mates – Bobby Rivere with Kafton (their running mate, Mike Reina, was absent for the first half of the program); and Todd Porter and Charles Garofano with Ingram – stuck to biographical sketches for the most part, but Garofano took a poke at Rivere, noting that in her two and a half decades on the school board of a Long Island town, the budget was increased 330%.

"Insanity," Rivere said to the charge. "When you look at the annualized percentage yield, it comes toa little over five percent over 23 years. And it was 27 budgets, for the record. They were told to say it.The 330% figure amountsto a stupid accusation and there are two accountants sitting there who know that they're compounding."

Porter went after Kafton, labeling the former elected official "a transplanted school board fixture who believed cutting was never an option."

Speaking tothe senior crowd, Kafton and his allies enjoyed an advantage on the issue of a town-negotiated deal with Cablevision, which most in the room believed did not contain sufficient relief for seniors.

Reina, a founding member of the Jackson Tea Party, a non-partisan group, and a registered Republican aligned with Kafton and Rivere, attempted toward the end of the debate to work some of the crowd’sapparent discomfort overthe back and forth between Ingram and Kafton.

"Stop this nit-picking garbage," Reina said. "What I’m bringing is to try to unify a town."

His remarks received applause in a half-cleared room in which the candidates appeared either sluggish or slightlyburned out byone anotherat the end of the contest, though Reina managed a final "this is a very important election." 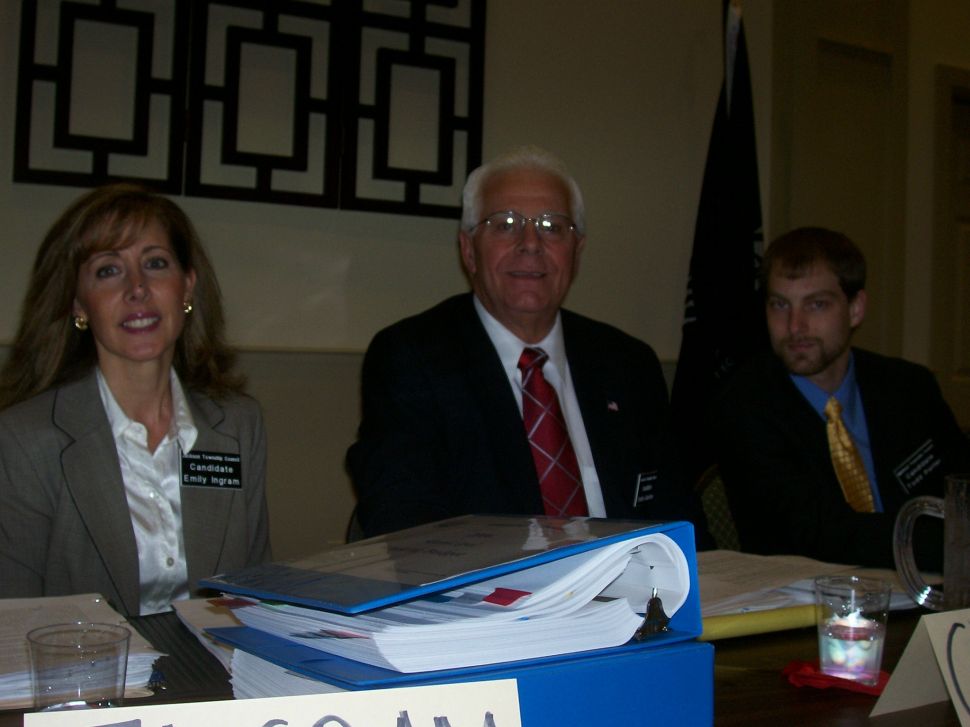