NEWARK – The car pulls into New Jersey’s northern urban stronghold on Saturday and slices through traffic on a mission.

Failing organizational power in the north, U.S. Rep. Rob Andrews (D-1) continues to try to nail together enough of a credible presence to drain his opponent in this part of the state where U.S. Sen. Frank Lautenberg has a snap-of-the-fingers ability to put people in the street.

The South Jersey congressman travels up Clinton Avenue in Newark’s South Ward, eager to connect with his own Democratic primary allies here.

But where he anticipates finding Andrews for Senate support in front of his destination, he instead encounters an army brandishing shiny blue Lautenberg signs.

“You can’t come into someone else’s backyard like that and feel comfortable,” explains Lionel Leach, Essex County director for the Lautenberg campaign, who leads the counter attack in the face of what he sees as a brazen invasion.

It’s almost as loud as the lawnmowers that met Tom Kean, Jr. two years ago when he tried to storm Menendez territory in Jersey City.

An apparently unruffled Andrews and his body man enter a small headquarters and Andrews embraces South Ward Councilman Oscar James II and Terrance Bankston, young Newarkers who are in the middle of a district leader war and trying to oust a South Ward power structure dominated by Lautenberg ally U.S. Rep. Donald Payne (D-10) and family.

“I’m excited by it,” says James, referring to the counter punch of Lautenberg hoopla all but engulfing Clinton Avenue just outside of campaign headquarters. “It shows we’ve done something in the South Ward to energize the conversation. Before it was just Lautenberg. Now it’s a conversation about Lautenberg and Andrews.”

Andrews also professes exhilaration as he sizes up the larger terrain, which he claims is divided not between north and south, but between an economic model prized by Republicans on the one side, and a modelsimilar to BillClinton’s in the 1990s, whichfavors middle class tax cuts with simultaneous tax hikes for income earners in the top 5%.

“The Republicans are religiously wedded to supply-side economics,” Andrews says, “and we have the argument of history to adjudicate this dispute. Just compare the Bush record of job creation with Clinton’s.”

But Andrews’s main argument for why Democrats should elect him on June 3 is that he’s a better candidate than the 84-year old incumbent to make the case for his party, in part because he dares to fight on enemy turf.

If rank-and-filers doubt how effective he would be in helping to conquer Sen. John McCain and the Republican senate nominee in New Jersey come November, the underdog challenger insists they should examine his battle plan for dislodging Lautenberg.

Andrews’s generalship of his primary candidacy with less than three weeks to go amounts to an Obama strategy in miniature, in which the 50-year old Camden County congressman refuses to divide the map along old fault lines and instead aggressively pursues voters in every corner, especially at the core of Lautenberg country.

“I’m prepared to take my Democratic Party message to all of the communities of the state,” says the candidate. “I am not going to concede one square inch to the incumbent senator.”

Then he adds, “There are going to be some very tough times ahead. The Republican attack machine knows how to cross the Delaware River, and I’m prepared to go to Joe Pennacchio’s or Dick Zimmer’s or Murray Sabrin’s hometown. Let’s go to Delaware Township and debate. Let’s go to Hunterdon County, to Flemington, the heart of red Jersey. We must carry our message to every neighborhood.”

Of course, when it comes to the primary, he has no choice now with what is arguably a strategy by default.

His hopes of winning the organization line in those northern counties where in the early days of April it briefly appeared that he had a shot – Essex, Union, and Middlesex – perished when Sen. Robert Menendez (D-NJ) and U.S. Rep. Steve Rothman (D-9) stared down Bergen County Democratic Chairman Joseph Ferreiro and prevented a domino effect out of Bergen and away from Lautenberg.

Even as the senator’s people and Menendez desperately worked on a coy Ferreiro, who wondered what Lautenberg had done for him lately, Sen. Ray Lesniak (D-Union) said Andrews’s ability to turn other organizations against Lautenberg “all depends on what happens in Bergen and Essex.”

And when Ferreiro finally backed Lautenberg and the Bergen line held for the incumbent senator, Adubato tried to work his will on Essex County Chairman Phil Thigpen, who mostly for the sake of protecting Payne held Adubato at bay and kept the Essex line with Lautenberg.

When his court battles subsequently failed to produce what he characterized as an “open primary,” Andrews had only one remaining recourse in what was quickly looking like an imploding operation.

He had to depend even more forcefully on those individual legislators at all levels of government in the north who stood to gain by bucking the system and aligning with South Jersey power, while simultaneously hoping that Lautenberg’s establishment support remains relatively soft.

Now Andrews has much of that campaign muscle on display, with senators Lesniak and Nicholas Scutari in Union, senators Joseph Vitale and Barbara Buono and Assemblyman Joseph Wisniewski in Middlesex, Sen Paul Sarlo in Bergen, Sen. Sandra Cunningham and Assemblyman Anthony Chiappone in Hudson and others, including Passaic County Freeholder Terry Duffy, and James and Bankston in the south of Newark, all pledging to mobilize votes for him on Election Day.

“When Joe Vas won here off the line in Bayonne, we helped generate 38% of the vote for him,” Chiappone says of Vas’s doomed 2006 congressional run. “He received the best percentage around the county in Bayonne.”

In addition to Newark, Andrews put together a weekend schedule that included stops in Montclair, Linden, Jersey City and Princeton – all places that Lautenberg dominates. On Sunday, Lautenberg raised campaign funds in Pittsburgh and Detroit.

“We’re not chipping away at his base anymore, we’re taking up big chunks,” boasts Andrews, who says his wife’s primary run for the congressional seat he gave up to go after Lautenberg hasn’t generated a significant Andrews backlash in his south Jersey base.

For their part, Lautenberg’s people argue that they have their own fight plan for the state, which depends more on media and mailbox outreach than cozy, 11th-hour face time with handfuls of voters.

Andrews’s support from James and Bankston – some challenges they have with the ballot notwithstanding – coupled with the backing of Adubato’s considerable North Ward Democratic Organization, makes Newark at the very least a battlezone.

“Work is what wins elections,” says Irvington Council President John Sowell, a Newark native and veteran of numerous Essex County political wars. “In this case, it’s a matter of surrogates connecting with the voters. If Bankston’s and James’s people do that for Andrews, and Lautenberg’s people don’t get out there forcefully, Andrews could do well.”

The Lautenberg workers wave their signs on either side of Clinton Avenue.

“You know those guys are paid,” says Bankston, to which Leach in the Lautenberg camp points out that Bankston bused in seniors who are unlikely to connect with an underlying message of youth over old age.

“If I were a senior, I’d be insulted by what they’re doing,” says Leach. “These are our canvassers. Some are paid and some are volunteers. These are all people who are invested in the community.”

Leaving the rally, Andrews shakes some of the free hands that aren’t shaking Lautenberg signs in his face. He climbs back into his vehicle and heads toward Montclair, where Lautenberg raised his family years ago. On the way, the congressman sends a text message to campaign chairman Michael Murphy, who’s driving another car. 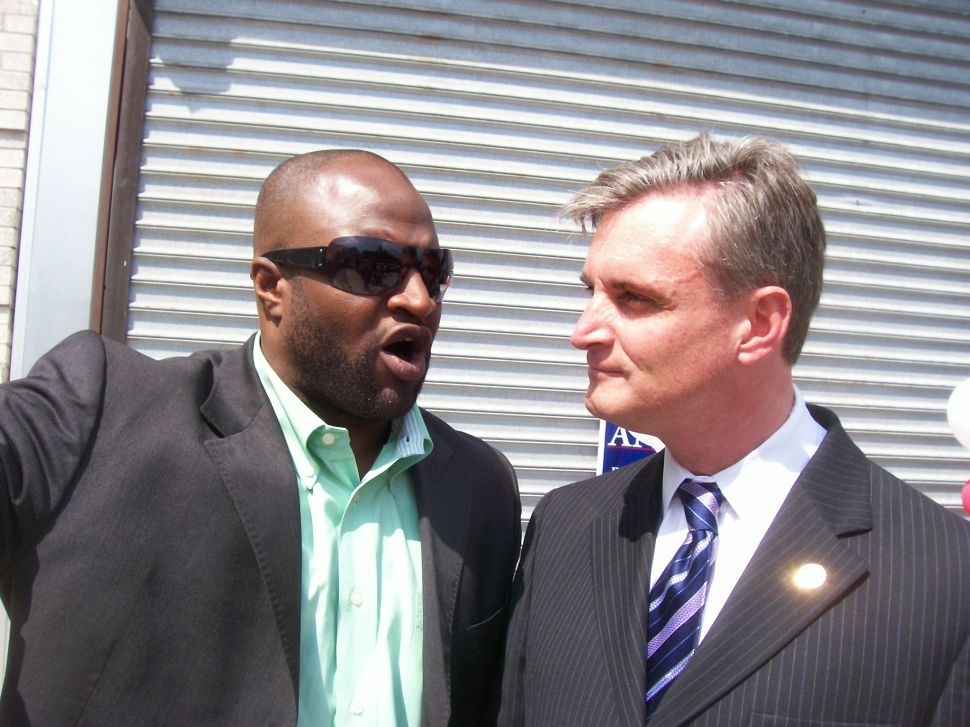