BLOOMFIELD – In a big, converted showroom filled with people, Gary Manageri reached way down into a bucket of toasted toffee ice cream, rotating his forearm and putting his shoulder into the action to get a full-fledged rounded scoop, which he proceeded to plop into a cone held by former Montclair Mayor Bob Russo.

Then he retrieved a second dip, which he dropped on top of the first, making Russo’s cone a double, and in the process illustrating what Russo wants voters to know in the Essex 5th District freeholder race.

As a dual-office holder, incumbent Ralph Caputo is an assemblyman and freeholder who collects two pensions, or "double-dips," in the common parlance.

On Thursday in Russo’s headquarters, helpers served 11 flavors of free ice cream to the challenger’s supporters and indulged Russo’s railing against Caputo’s decision to dig in as a freeholder after telling people when he won his assembly seat last year that he would relinquish his freeholder seat.

"He shouldn’t have been allowed to run again and he shouldn’t be holding these two positions," Russo said. "I guess he realized that the $31,000 plus salary of freeholder and the $49,000 plus salary for assembly add up to over $80,000."

Most Essex County insiders say despite Russo’s cross-section of support from elected officials in three of the district’s five towns – Belleville, Bloomfield and Montclair – he remains a longshot running off the organizational line.

"He’s banking on being on the line," Iacabocci said. "But the bottom line is the Legislature passed a law to stop double-dipping and Ralph used a loophole to hold both offices. Essentially, he chose to violate the spirit of the law."

In the face of Russso, Caputo, who repeatedly has pointed out that what he is doing is not against the law, has strong support in Nutley and Glen Ridge and solid backing in his hometown of Belleville.

But his school board and municipal candidates just lost in back-to-back elections, signaling a weakening to Russo that the challenger is happy to exploit.

So are some others.

Two Belleville councilmen and their running mate whom Caputo brazenly challenged and failed to defeat earlier this month, showed up at the Wednesday night rally, ready to lend their voices to Russo’s cause.

"This is a guy who supports you and then he comes after you," Councilman Steve Rovell said of Caputo. "There’s a lot of new development in Belleville and these guys see Belleville as a plum that’s ready to be picked."

Mac Donald stood in front of a table in which there was a big bucket of ice cream labeled "Ralph-is-for-rum raisin rip-off" as Jerry Digori of Belleville gave the councilman-elect a helping, then gave him a second, equally generous and equally theatrical scoop. 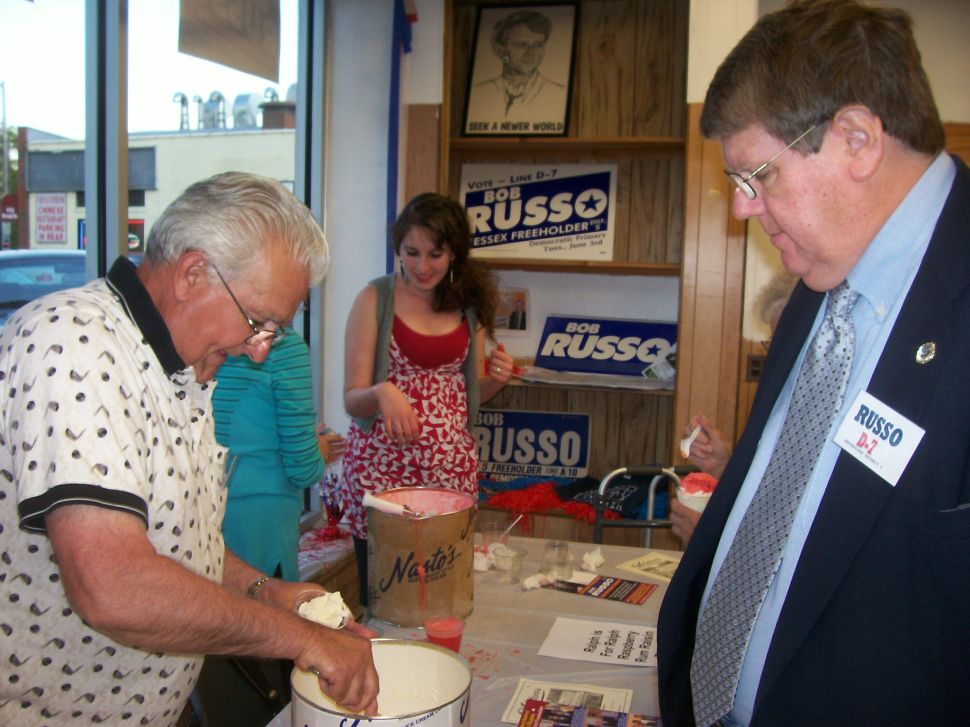