The Obama campaign started small here, with handfuls of coffee house organizers lining up behind a grassroots operation called NJ for Obama in the face of a big party machine backing Sen. Hillary Clinton (D-NY), and an unpopular war in Iraq.

Founded in an Edison coffee shop in December of 2006, the group’s leader was Damian Bednarz, 25, a Master’s student in international relations with Seton Hall University’s Whitehead School of Diplomacy.

"Obama has something that Hillary Clinton can’t buy or reproduce, and that’s a sense of inspiration," Bednarz said at the time. "If anything, I’m encouraged by Clinton’s frontrunner status because I know our work is so special."

In the months following, some elected officials endorsed the Illinois senator, among them Assemblyman Neil Cohen (D-Union), who came out in favor of Obama in April of 2007,followed bystate Sen. John Adler (D-Camden) a couple of weeks later.

"At this time we need someone special… someone who is going to build a bridge brick by brick to peace through negotiation," said Cohen, a graduate of Howard University who arrived at politics through the Civil Rights era.

One common theme early was the appreciation that Obama’s supporters showed for their candidate’s opposition to the Iraq War – which differentiated him from Clinton, who in 2002 authorized President George W. Bush to send in troops.

The sense at this point was that Obama was at best a longshot nationally and in New Jersey, almost a no-hoper, but as Bednarz organized at the grassroots level, Newark’s new mayor, Cory Booker, began sprinkling speeches with inspirational Obama references and quotes.

As most of the rest of the party’s power players stood with Clinton, Booker and Jersey City Mayor Jerramiah Healy officially endorsed Obama on the Illinois senator’s first campaign stop in New Jersey in mid May of 2007.

They met him at Teterboro Airport and stood with him as the cameras flashed, just before the presidential candidate drove to Trenton for a town hall meeting with organized labor at the War Memorial.

At the urging of mutual friends, Oprah Winfrey and Gayle King, the future mayor and future presidential candidate had first sat down together in Newark in 2004.

"This is a nation right now where we don’t need more political leadership," Booker said. "That’s important, but we really need a leader who speaks to our highest aspirations for ourselves; a leader who reflects our beauty and strength as a people, who reflects who we are but also who we can be."

Rice and Council President Mildred Crump drove to Hoboken in May of 2007 at an invitation from Bednarz to speak at a $150-a head NJ for Obama fund-raiser.

In a diner in Newark’s West Ward a few weeks later, the councilman confessed that he didn’t know whether Obama had a legitimate shot in 2008.

"We’re going to keep building, we’ll keep organizing to put ourselves in a position to take advantage of anything that happens," said Rice, who continued to prominently display his "Obama for President" buttons as friends of his told him to get a life.

At his low-key appearance at the War Memorial, Obama repudiated the Clinton-engineered North American Free Trade Agreement (NAFTA) and called for more rigorous labor and environmental standards in all future trade agreements.

When UFCW member Kathy Wilder of Wall asked the senator, "What are you going to do about Wal-Mart?" there was an up-swell of boos and groans at the mention of the corporate giant, and Obama dead-panned, "I won’t shop there."

Back in West Paterson in early June, Bednarz had finished his Master’s degree and accepted a full-time position with the Obama campaign in their New Hampshire office.

On the night before he left, the political organizer kicked back a last beer in Hoboken, watching the late night commuters return from Manhattan.

He was committed to Obama. He had been ever since he heard him deliver the keynote address at the 2004 Democratic Convention. Concurrent with his university studies, Bednarz had to this point devoted five solid months of building a statewide network of Obama supporters – a list that grew from four to 25 to nearly 500 members.

But now that he was leaving New Jersey, he couldn’t help but wonder if the entire endeavor was not finally quixotic. He allowed himself only several moments of speculation before concluding that one way or the other, he didn’t care. Obama was the candidate in whom he believed. If Bednarz went down he was going to go down fighting.

He jumped aboard the PATH to Newark, changed trains and headed back to Fairlawn. He would get up and drive to Manchester in the morning and continue organizing.

The new director of NJ for Obama was Keith Hovey, a Montgomery lawyer in his late 30s who immediately began organizing statewide registration drives for the presidential candidate.

"We want to be part of a campaign for a government that is inclusive and intelligent," said Hovey, who as part of his first effort coordinated 200 on-the-ground volunteer canvassers mobilizing in Princeton, Edison, Newark, New Brunswick, Hoboken, Camden, Madison, Hamilton, Plainfield and Sparta.

These volunteers carried two sets of petitions: one to end the war, and one to make Obama president.

"It’s time to turn the page and bring an end to the Bush-Cheney foreign policy that has left Americans vulnerable here at home and reduced matters of war and national defense to signs and slogans," said Rothman.

Rothman was New Jersey’s first congressman to come aboard – and he would be the only one during the primary season.

Every other Democratic member of the state’s congressional delegation had endorsed Clinton, with the exception of U.S. Rep. Rush Holt (D-12), who stayed neutral until after the June 2008 primary election.

Rothman claimed he had decided to support Obama for president after watching CNN’s YouTube debate, in which Clinton and Obama had fought over how to conduct U.S. foreign policy.

"Barack's appearance… confirmed for me what I've believed all along," said the congressman. "It's new thinking versus old thinking. This notion of Hillary Clinton’s that we should continue down this path of not talking to our enemies is a policy that has proven to be disastrous to our country. These are not the views of someone who professes to be an agent of change."

"I made the similar vote," the Congressman admitted of his 2002 "yes" vote authorizing Bush to use force in Iraq. But Rothman added that he later "declared it to be a mistake."

By the end of July, 2007, reform Mayor Jun Choi of Edison had also endorsed Obama.

"I’ve been leaning Obama for quite some time now," said Choi, who had publicly blasted Bush at an anti-war rally when the president visited Edison for a GOP fund-raiser weeks earlier.

"I wanted to see if there was real momentum in the (Obama) campaign, and there is," said Choi.

The team was coming together.

Booker anchored a $150-a-head Obama fund-raiser at the Robert Treat Hotel in Newark. In a speech to a crowd that included Healy, Hovey, Rice, Cohen, Choi and organizers from around the state packed into a small room, the mayor called for a "sacred effort," not unlike what Frederick Douglass had once ascribed to Lincoln’s second inaugural address.

"It is time for us," Booker said, "the inheritors of glory and greatness, those of us who scan the current landscape and understand that America is not finished yet… We must put forth a sacred effort, and win for Barack Obama." 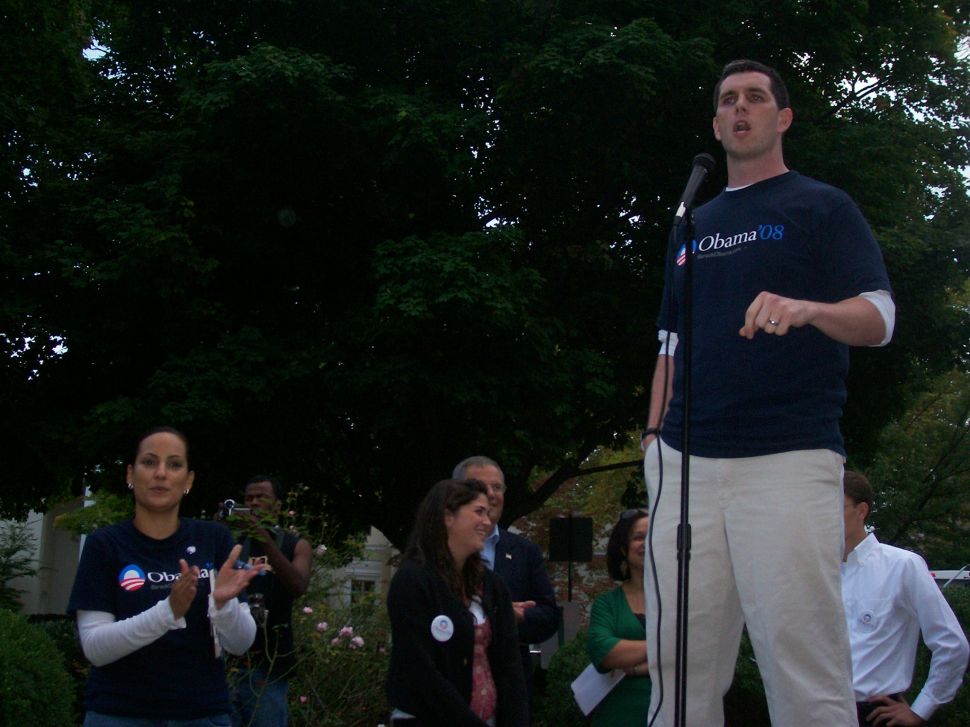