pursue a fourth term in next year’s election.

“It’s early, but there are still a lot of things we need to do here,” said Bowser, who has led the redevelopment of his Essex County city over the past 11 years.

“I saw that,” said Bowser, referring to news of the potential challenge. The mayor doesn’t seem concerned.

Although he refuses to say he’s 100% dedicated to running, sources close to Bowser say he’s going to run.

One thing that may have prevented his seeking another term would have been the retirement from the Essex County Democratic Committee chairmanship of Phil Thigpen.

Bowser was interested in the job, and might have bowed out of local politics to be the man at the county level.

“Some people – including myself – were upset that a small group of people were going to dictate something to the rest of us,” said Bowser, referring to an attempt by Newark North Ward Democratic Leader Steve Adubato to oust Thigpen, who like Bowser is from East Orange.

“At that point, Thigpen was a little noncommital,” said Bowser, who put his name in the mix.

When it became clear that Thigpen would be the only candidate agreeable to all factions, Bowser backed down among other candidates, including Elnardo Webster and Adrianne Davis.

“Thigpen’s done a good job,” said Bowser. “He’s been fair. He’s tried to bring people together. They criticize Thigpen because of his apparent lack of fund-raising prowess, but part of the problem was people were purposely not supporting him. We needed to have a consensus candidate, and this is a man whose lines have never lost since he’s been chairman.” 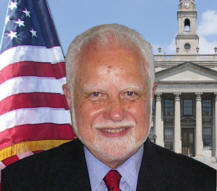