A staunch opponent of mortgage company regulation and bailing out distressed borrowers, U.S. Rep. Scott Garrett (R-Wantage) has a new chief of staff with ties to the troubled mortgage industry.

Amy Smith, who was hired as Garrett's chief-of-staff in March, spent two years as a lobbyist for the boutique firm Bartlett, Bendall and Kadesh, LLC, during which time she helped lobby for Countrywide Financial, the mortgage giant that has borne part of the blame for the subprime crisis, along with several other clients.

That, according to the campaign of 5th District Democratic challenger Dennis Shulman, represents a "revolving door culture in Washington."

Garrett sits on the House Financial Services Committee and its Housing and Community Opportunity subcommittee. Known as one of the most fiscally conservative members of congress, Garrett has been an opponent of additional regulation for the mortgage industry since well before he hired Smith.

Hauser argued that the hiring of a staff member with past ties to a company at the center of the crisis makes it hard for Garrett to take an honest look at the problem, especially when he sits on a committee that oversees lending practices.

"We would hope that he looks at the facts in addition to his ideology, and we would hope that his views would reflect changing facts," he said. "I don't believe if your chief of staff represents special interests, that your views will ever grow, mature or change."

Garrett has received $5,000 in campaign contributions from Countrywide since entering office in 2003, including a $1,000 contribution made the same month Smith began in her position. The company has also donated $2,000 to Sen. Bob Menendez (D-Hoboken), $500 to Rep. Rob Andrews (D-Haddon Heights) and $250 to Rep. Frank Pallone (D-Long Branch).

Smith, however, said she never lobbied Garrett during her time with the firm and that her former ties to Countrywide Financial have no impact on her work for Garrett's office.

"Clearly we want to make sure that the people are represented in an appropriate way, and Congressman Garett has had strong positions all along," she said. "His positions have always been the same and that's one of the reasons I wanted to work with him."

Smith, a Kansas native, began her political career as a staffer for former Sen. Bob Dole (R-Kansas) before becoming a deputy assistant treasury secretary in the Bush administration. She returned to Kansas after working as a lobbyist, got her MBA, then returned to work for Rep. Brian Bilbray (R-Calif.).

Countrywide Financial has faced bi-partisan criticism and scrutiny for more than just subprime loans. It's currently at the center of two Washington scandals.

Senators Chris Dodd (D-Conn.) and Kent Conrad (D-N.D) have faced fire for accepting cut rate mortgages from Countrywide, while Obama advisor Jim Johnson was forced to resign from the candidate's vice presidential screening committee after it was reported that he had received reduced rate loans from the company.

Phyllis Sarlowe-Kay, the executive director of New Jersey Citizen Action, which advocates on behalf of mortgage defaulters, said that the ties to Countrywide "give her pause," but that simply having a staff member who's a former lobbyist does not indicate a conflict of interest.

"I think probably Scott Garrett would say given the mortgage crisis that's happening it's great to have someone eon my staff who has knowledge," she said. "The unfortunate thing is that she's a person who obviously comes from the company that has been the major part of the problem that we're facing."

Smith said that she hasn't had any contact with Countrywide since she started in Garrett's office, and that her desire to return to Capitol Hill was based purely on principle.

"I wanted to come up and work for the American taxpayer and American people," she said. 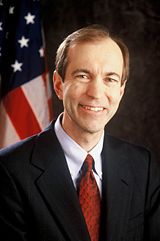