When most of his Democratic colleagues endorsed backyard darling Hillary Clinton for president over a year ago, U.S. Rep. Steve Rothman (D-9) cut from the pack and picked Illinoisan underdog Barack Obama.

The Obama campaign rewarded Rothman with a position as northeast regional co-chair and through a long-slog primary he played a leading and aggressive role on behalf of his presidential candidate.

"To the victor go the spoils," a congressional staffer said with a shrug in his voice.

In that vein, the Bergen lawmaker told Obama’s people in Chicago that he wants his chief of staff, Bob Decheine, running the New Jersey-based campaign headquarters in advance of the Nov. 4th showdown with presumptive Republican presidential nominee John McCain.

Sources close to Gov. Jon Corzine say the governor has expressed misgivings about backing someone straight from Rothman’s office, particularly since Rothman is on a short list of congress people jockeying for position to occupy Sen. Frank Lautenberg’s seat when the senior senator retires.

Mark Alexander, who was Obama Campaign State Director in the primary and now serves as the candidate’s senior advisor, admits the process of appointing a state director is complex, and not just here.

"We’re trying to build a national operation but each state has its local politics," Alexander said.

In New Jersey, most of the power players stood with Clinton and man campaign infrastructure that is calibrated in part with political action committee money that Obama has shunned as a candidate.

Now, how much power can the state party afford to distribute without losing its establishment face, and the force of the machine?

While nursing his own, old proprietary feelings for fellow mid-westerner Obama – Corzine as chair of the Democratic Senate Campaign Committee backed him in his 2004 senate run – the governor questions the wisdom of allowing the ambitious Rothman to in effect test-drive a statewide campaign in this critical election cycle.

Rothman insists he doesn’t care who runs the operation at this point.

"I’ve been in touch with Obama campaign," he said. "I feel very confident we will have a strong campaign. Regardless of who we have as state director, that person will lead an enthusiastic and excited Democratic Party, which has never been united like this in my 30 years in politics. We’ve more than doubled volunteers since Feb. 5, and we’ll double them again in the next month.

"The bottom line is we’re going to have a very qualified state director," he added. "All that matters is our party is unified behind Sen. Obama. We’re going to win New Jersey."

At least one longtime supporter who is not within the Rothman ranks said he’s fine with Decheine serving as campaign director.

"He was our first choice," Healy said of Rothman’s chief of staff. "I’m hearing that there seems to be some reluctance. I don’t know why. He’d be a great campaign coordinator. He has done a good job and he could do a good job in the general election.

"The bottom line,"added the big city mayor, "is we have to get this tremendous candidate, Barack Obama, elected. I couldn’t care less about other people’s ambitions a year from now or two years from now or whenever."

In the event that the Obama campaign does not pick Decheine, Healy says his own corporation counsel, Bill Matsikoudis, remains interested. Sources within the Obama operation say they have interviewed at least one other person, a woman already in the New Jersey political arena.

As he boarded an airplane bound for Denver today to attend a pre-Democratic Convention walk-through with 49 other state chairs, Joseph Cryan, chair of the New Jersey Democratic Committee, said his party is hardly in crisis mode.

"We’re going to have this settled in the next few days," Cryan said.

Foreseeing a blue state blow out, Senate President Richard Codey (D-Essex) is unconcerned with who runs the Obama campaign, whether it’s Decheine or anyone else.

"Whoever the national Obama campaign is comfortable with, that’s who should be the state director," said Codey, who, like Healy, added that yesterday’s McCain headquarters unveiling complete with "Ronald Reagan Democrat" invocations didn’t impress him.

"This is a different state than it was when Ronald Reagan had a beer in Bayonne," Codey said. "Obama’s thing in the primary was he appealed to very well-educated voters, African-Americans and a good amount of labor. Hillary’s labor votes will come back, no doubt about it. Many of them are labor people who are clearly be better off under Obama. These are your Springsteen voters who still listen to Sinatra."

Booker was unavailable for comment on the state director situation. But the mayor’s close political ally, Newark Councilman Ronald C. Rice, who along with Rothman, Healy and Booker was among the eight or nine elected officials who first stood with Obama, said Rothman’s chief deserves special consideration for the job.

"Obviously, it took a lot of guts for Steve Rothman to buck the party," said Rice. "He should be rewarded."

If that doesn’t come in the form of Decheine’s appointment as director, the onetime Clinton forces at least need to extend some kind of public olive branch, in Rice’s view.

To the specific point of a state director for the campaign, the west ward councilman and son of shoe leather state Sen. Ronald L. Rice, insists the person who runs the New Jersey campaign must be good at grassroots operations.

"We need someone who embraces voter registration, who sees opportunities to expand the river, and who can get out the vote not just in urban areas – but in red New Jersey," Rice said. "You’re going to have your explosions in places like Princeton, but we want to go into suburban areas where we don’t expect that, and just put tons of gravy on top of those base Democratic numbers, leading to a landslide."

As the conference calls back and forth between Chicago, Washington and Trenton persisted over the state director appointment, Rothman stayed focused on what he says the campaign has already accomplished toward the general election.

"There are 10 paid Obama staffers currently in the state working on voter outreach and registration efforts," said the congressman. "There is leased office space in Trenton, Cherry Hill and Hackensack. There are also 95 Obama Fellows operating in New Jersey today.

"These folks have been through an extensive training program and are working closely with the New Jersey State Democratic Committee to organize the hundreds of thousands of new Democrats generated in our February 5th primary and register new voters." 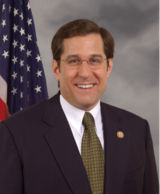