PASSAIC – In a room just off Passaic Avenue with the ceiling fan spinning down on about 30 people in early summer, Jose Sandoval starts with the Lord’s Prayer, then goes into his attack plan for the Nov. 4th special election.

Although he’s never held elected office, Sandoval’s been through this drill before, having run unsuccessfully for the Assembly against Gary Schaer in 2005 and the U.S. Congress a year later against U.S. Rep. Bill Pascrell (D-8).

A 55-year old Republican real estate developer and family man who owns three huge properties in the scandal-ridden city’s upscale section, he looks like a sharply dressed man of the people as he stands in front of a colorful banner with one word bigger than the rest: "Sandoval."

It’s four months before the election to fill the unexpired term ofconvicted former Mayor Sammy Rivera, and Sandoval’s talking strategy. He’s talking about getting voters registered and getting the elderly and infirm to polling places. He speaks fast and eloquently in Spanish.

The people in the small crowd listen intently. They’re mostly Dominican in a city of 70,000 where Latinos form the biggest voting bloc and where at least several other early mayoral candidates are either Puerto Rican or Dominican.

Latinos as a whole constitute 52-54% of the voting population, and the subdivisions within that sprawling group break into the two biggest communities: Dominicans, who presently number 800-900 strong, and Puerto Ricans with roughly 2,000 registered voters.

A resident here since 1973, Sandoval claims a part of all the worlds of Passaic, starting with the main Latino strains.

"I’m half Puerto Rican and half Dominican," he tells PolitickerNJ.com. "When I came from the Dominican Republic to New York, I had $13 in my pocket. I was 17 years old, and at that point in time I first became aware of how giving American people are. I told myself that if someday I’m in a position where I can affect some good, I’d like to return the favor. One of the things I practice everyday, do a good deed each day, learn something, help somebody."

Sandoval was never tight with Rivera, whopleaded guiltylast month after the feds nabbed him as part of a federal corruption sting that felled ten other public officials, including Passaic Councilman Marcellus Jackson.

While he talks tactics with his supporters, the Tuesday evening city council meeting is in session a few blocks away in City Hall.

Jackson’s seat on the council is now empty, the name plate stripped from the dais. In Rivera’s place sits Acting Mayor Schaer, who beat Sandoval in their Assembly race by 3,000votes.

So is physician Alex Blanco; and Vincent Capuana, the city's housing director and a school board member; Carl Ellen, a bail bondsman whom Rivera knocked off in a 2001 race; and Ritzy Moralez, who works for Pascrell.

And there are others, and there may be more to come.

Rivera’s gone but he was the king here of this river front city north of Newark, which suffered a fire in 1985 that obliterated the factory economy and left a husk swelling steadily with immigrants of all nations. Arguably the best and most vibrant New Jersey culture abides in Passaic, as restaurants from everywhere cram Main Avenue with car parking running up the middle and salsa and meringue rhythms coursing through everything.

But so too does the worst live on these streets, as 44 known gangs rove the city’s packed 3.2 square miles.

"Passaic could be the Garden of Eden if we could just do it right for a change," says Schaer, who’s looking at a $73 million right now in an Abbott School District where the school board’s budget is $275 million.

Back before Rivera took his public nosedive, Sandoval had hoped the mayor would back him in his run against Schaer, which Rivera couldn’t do publicly because he’s a Democrat. Now Sandoval’s detractors say the fact that he’s a Republican – with twin children named Lincoln and Reagan no less – can’t possibly do him any favors in this Democratic Party stronghold where Dems on paper have a 4-1 edge.

A onetime Rivera ally, Schaer and Democratic Partyorganizers will try to block their nemesis, though Schaer – himself a former Republican – hasn’t yet backed a candidate.

Whatever happens, and however the players align to defeat one another in targeted voting districts, Sandoval reminds his foes with an easy smile that it’s a nonpartisan election.

As he looks at a staggering city in the aftermath of Rivera, Sandoval wants a recreation center for children as part of a vibrant redevelopment effort.

He wants to develop the river front section of the city. The one-time factory worker made good as a developer watches the youth from other towns row by his city in their sculling crafts and he yearns for the kids of Passaic to get on that river and compete against those boats out there now.

He envisions kids now on street corners fencing and playing golf and swimming.

"The federal or state government can’t do everything for us," he says. "We need to have an army of grant writers, and we need partnership between the public and private sector.

Some of these parents work two jobs. They have small children. Their income is very limited. Part of government’s job is to provide people with means to become part of the community."

Some of his supporters from the 2006 challenge of Pascrell still love Sandoval, but say he made a strategic mistake by challenging the popular congressman, and they cite organizational problems in that campaign.

Now organization doesn’t look like an issue for Sandoval as he glides through his crowd of backers, grinning, shaking hands affectionately and talking up bumper stickers he’s soon to receive and the necessity of an aggressive absentee ballot effort and new voter registration.

He knows he’s a danger to the entrenched power structure in the city, but he also knows that structure backed Rivera and Rivera’s fallen, and now Sandoval’s on the move in early summer.

"We have these meetings every week," he says. "I’ll tell you, this is important. On Nov. 4th, we’re either going to save the city, or the city’s going to sink." 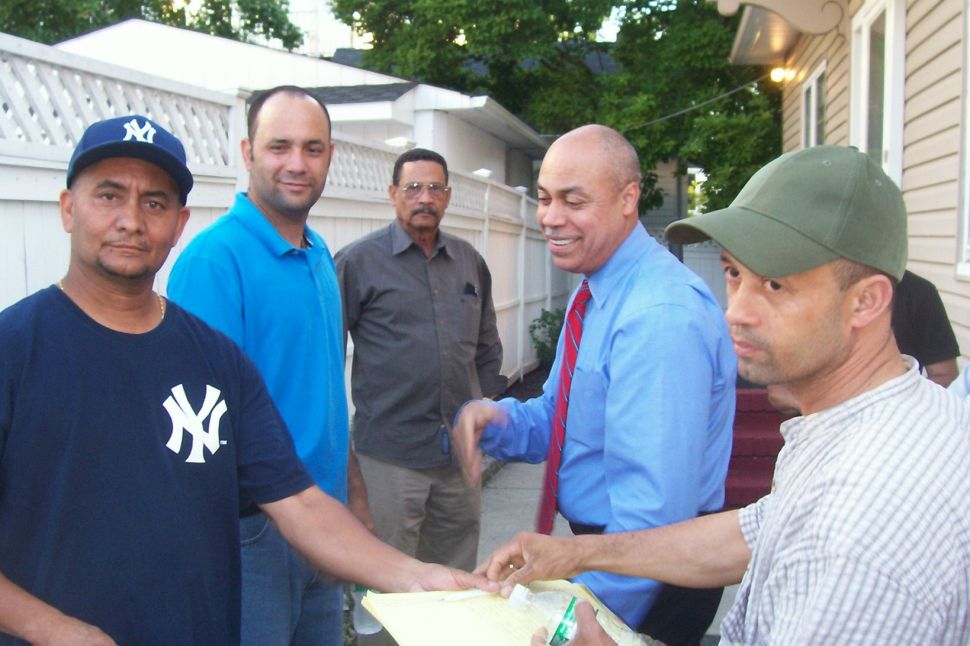