FLEMINGTON — State Sen. Leonard Lance declared victory a little before 10 p.m. in the crowded Republican Party primary race for the 7th Congressional District stressing to supporters gathered at the American Legion hall that the key contrast for the November general election will be fiscal responsibility.

"We cannot tax, borrow or spend our way to fiscal responsibility and that will be the biggest contrast in the general election," said Lance, who was joined on stage by supporters, his wife Heidi and Republican state lawmakers, including state Senate Minority Leader Thomas Kean Jr. and U.S. Rep. Mike Ferguson, who is vacating the 7th District seat after four terms.

In his speech, Lance did not name his Democratic opponent, state Assemblywoman Linda Stender, by name, but said that the differences between him and his Democratic rival will be more than apparent to voters in the fall.

In an interview with PolitickerNJ.com following his speech, Lance expanded on what he said, emphasizing that he's known in Trenton for reaching across the aisle in the spirit of bipartisanship, has "never compromised on my principles" of fiscal responsibility and that overall, "voters are sick and tired of partisan bickering" in New Jersey and in Washington.

Although the 7th Congressional District favors Republicans, Stender nearly unseated Ferguson in 2006 leading some Democratic observers to believe that the party can capture the seat this election cycle. 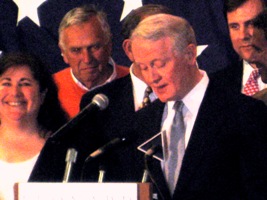