NEWARK – They came together in Newark tonight in a public display of unity, the forces of Barack Obama and Hillary Clinton, all lining up behind Gov. Jon Corzine, who proclaimed his support for Obama in this governor’s fund-raiser for the Democratic State Committee.

"Yes, we can, and he will be the next president," shouted Corzine, echoing the campaign slogan of the presumptive Democratic presidential nominee.

The Democrats raised over $500,000 tonight at the New Jersey Performing Arts Center, according to party spokesman Richard McGrath, as part of a $5,000 VIP ticket, $1,500 per-personkick-start for what Corzine hopes will be blue state heaven for these Democrats come Nov. 4.

"We want to deliver our 15 electoral votes overwhelmingly for Obama," said the governor, to send a message that "New Jersey stands for the change that Barack Obama’s leading us to."

Corzine drew applause when he added, "I want a Democratic president when I’m running for re-election," a second public signal sent out in as many weeks that he means to go for a second term.

He mentioned the names of the more obvious Democratic Party darlings in this general election: incumbent Sen. Frank Lautenberg and Congressional candidates Assemblywoman Linda Stender (D-Fanwood) in the 7th District and state Sen. John Adler (D-Camden) in the 3rd.

The gubernatorial shout-out for Shulman, who stood at the front of the half-circle crowd listening to Corzine, came a day after Democratic Majority Leader U.S. Rep. Steny Hoyer (D-MD) stumped for Shulman in New Jersey and gave him $2,500.

Prior to the governor’s speech, State Democratic Party Chairman Joseph Cryan introduced state Senate President Richard Codey, who picked Jersey City Mayor Jerramiah Healy out of the crowd and boasted in reference to the November election, "Hey, Healy, we’re going to get a bigger plurality in Essex then Hudson County."

Codey worked the pressure points of national issues he says favor Democrats on Nov. 4th, most notably the economy.

"It’s bad as hell out there," said Codey.

Of the governor’s budget, the senate president acknowledged it contains some tough cuts – some cuts with which he doesn’t agree, in fact. But he likened Corzine to former Gov. Brendan Byrne, who in a dismally unpopular but fiscally responsible move, in Codey’s opinion, hiked the income tax in the 1970s.

In any event, Corzine’s "about as nice a gentleman as possible," the former governor added, moments before introducing the man who replaced him, who backed Clinton for president while Codey turned his support for the faded John Edwards into a pre-primary Obama endorsement.

Following the hug for Codey, "Are we united as Democrats?" Corzine yelled, and the crowd yelled back. Are we going to win this, or what? …We have a person who can lift this country unlike anyone since Bobby Kennedy. We are destined to make history this year." 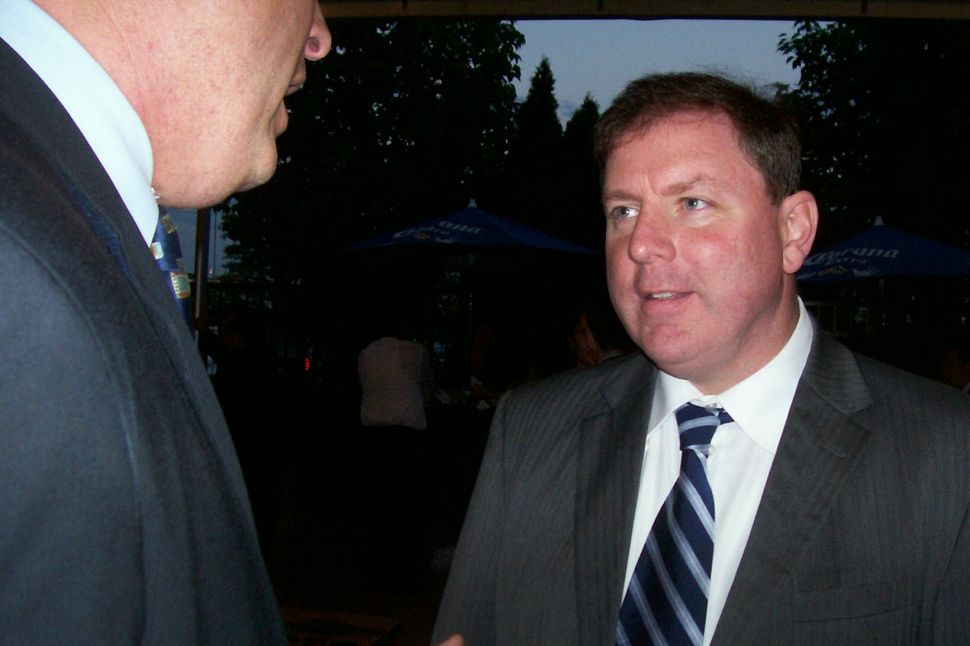