PATERSON – It worked in 2006, and with time running out in which to prop up and target an upside-down President George W. Bush and his allies, senators Frank Lautenberg and Robert Menendez took a shot today in front of a Citgo gas station sign that read: Gas: $3.95, cash; $4.05, credit.

While station owner Fadi Sabbagh stood nearby with arms folded and the cars rumbled in and out on Chamberlain and Preakness, Lautenberg and Menendez laid siege to the Bush administration and their Republican helpmates over high gas prices.

"When you have two oil men in the White House, it’s not shocking to wonder where our energy policies are headed," said Menendez, who along with Lautenberg wants to reintroduce legislation that last week failed to reach the required 60 cloture votes (51-43) on the Senate floor.

The Consumer-First Energy Act of 2008 would roll back $17 billion in tax breaks to oil companies and green light the reinvestment of that money into renewable fuels and energy efficiency. It would also create a windfall-profits tax for the top five major oil-and-gas companies (25% on windfall profits), and make price-gouging for gasoline a federal crime.

"We have a razor thin supply/demand balance, which results in higher prices," Benton said. "We need to develop more supply – readily available oil, in other words; and additional competitive mechanisms to get that product to market place."

Backed up by U.S. Rep. Bill Pascrell (D-8) – who’s working another bill, the Renewable Energy and job Creation Act, in the House – and Paterson Mayor Jose "Joey" Torres, Menendez conceded the reality of demand in the United States, and the creation of new competition for resources from India and China.

But a national energy policy uploaded by oil men has resulted in excessive crude oil transactions going through off-shore markets and increased oil prices for struggling consumers, according to the senator.

"We want to ensure that the government is working for the families of this country, not the oil companies," Menendez said.

Eric DeGesero of the Fuel Merchants Association of New Jersey, which represents the gas station owners or "little oil" as opposed to "big oil," in his words, said the owners"are in the same boat as consumers. The only difference between them and consumers is they have a bigger gas tank."

"We like the provision of the bill that addresses the real cause, which is speculation by investment banks and hedge fund companies," DeGesero said.

Hammering on the consumer advocate portion of the legislation and

"President Bush and his conspirators stand there and try to block all attempts to bring reason to this issue," Lautenberg said. "We are here to say we’re not going to permit this to continue. We’re here to say ‘shame’ and to point fingers at those people who are standing in the way."

For their part, the Zimmer campaign seized on similar figures the Democrats had used in reference to Bush and highlighted on an easel near the outdoor podium where each of the federal lawmakers took turns speaking: gas when Bush took office = $1.46, and now as Bush leaves office = $4.

"When Frank Lautenberg became senator again, gas was $1.41, and it’s now $4," said Zimmer spokesman Ken Kurson. "It’s emblematic of his ineffectiveness as a U.S. senator that the best he can come up with is more taxes. The senator never met a problem that couldn’t be solved with higher taxes."

No one disagrees high gas prices will be an important – and divergent – election year issue.

Conservative Republican political operative Rick Shaftan said he wishes Zimmer also backed drilling in the Arctic National Wildlife Refuge and off-shore oil drilling. That sentiment was summed up by Pascrell today as "the other side's answer to the gas crisis is to drill, drill, drill," and vociferously expressed by GOP activists at the McCain town hall meeting last Friday in Pemberton.

McCain walked past them to other outstretched hands.

"We can’t drill now because we have these environmentalist nut jobs preventing it," said Shaftan. "If we got around them and they announced that they’re drilling, the price would drop tomorrow. Zimmer’s approach amounts to half a loaf. He doesn’t want to tax oil companies, a tactic which comes down to taxing consumers. Good, he’s got that right. But then he doesn’t want to drill. Wrong."

On the opposite side of the issue, Jeff Tittel, executive director of the New Jersey chapter of the Sierra Club, applauded the ongoing efforts of Lautenberg and Menendez.

"It’s a good bill," Tittel said of the Consumer-First Energy Act. "Of course, their efforts to pass that would have to be herculean because of the power of special interest money behind not just the fossil fools in the White House, but the tower of dirty oil in Congress."

At the Lautenberg-Menendez press conference in Paterson today, a reporter who persisted in challenging the validity of a bill that already failed last week, met with a sharp rebuke from Lautenberg, who said, "Stop making the effort? Is that what you’re saying we should do?"

Menendez, who said they and other Democratic lawmakers around the country would try to reintroduce the bill tonight or tomorrow, added, "I do not believe that giving up is an option." 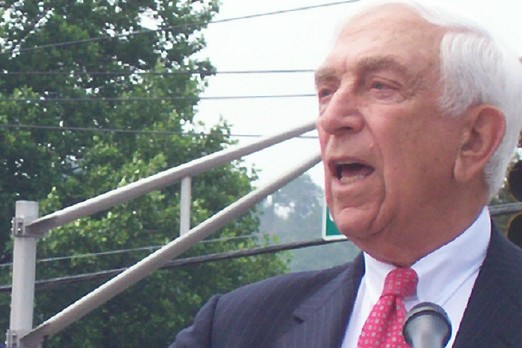