Nothing’s ever rock solid in politics, but the top of the Trenton power heap may contain more potential for movement than usual in the lead-up to Statehouse reorganization come January.

Two possible factors include Speaker Joseph Roberts’s (D-Camden) imminent departure from the Assembly, and the possibility that a newly crowned Obama administration would haul former Wall Street guru Gov. Jon Corzine out of New Jersey to crunch numbers in Washington.

In the thicket of this political drama, it’s difficult not to identify Senate President and former Governor Richard Codey (D-Essex) as a protagonist.

"I’m just a kid from Orange," Codey told a packed auditorium in his native Essex County town last month – but he’s also a former governor, who by all appearances liked the job and enjoyed great popularity.

and two of the reasons the rumors won’t die are because other legislators have poached some of Roberts’s top notch staffers, and South Jersey boss George Norcross continues to press for forehead-to-forehead talks with key northern power players on the issue of Trenton leadership in the new year.

The South Jersey Democratic Organization (SJDO) has long sent out signals that it wants to knock Codey out of his position. Historically, North and South have split the top seats of power in the two houses of the Legislature.

Whatever Roberts’s personal barometer on his public career at the moment and notwithstanding his own leadership position in the SJDO, the decisions in that organization go down collectively.

If his South Jersey allies lean on him heavily to retire as part of a larger strategy, Norcross’s calculation would likely include the advancement of Sen. Stephen Sweeney (D-Gloucester) within the 23-member Senate Democratic caucus.

"There’s no doubt his career is on an upward swing right now," Roberts says of Sweeney. "He clearly has a seat at the table."

The anti-Codey contingent argues that they have the votes to make it happen. They claim, of course, the South Jersey delegation, including Sen. Fred Madden (D-Gloucester), Jeff Van Drew (D-Cape May), Sweeney, Sen. Jim Whelan (D-Atlantic), Sen. John Adler (D-Camden) (or his replacement), and Sen. Dana Redd (D-Camden).

None of it happens without Lesniak.

The powerful Senate veteran controls those Senate votes in his native Union, Middlesex and in parts of Hudson.

"I am the X factor," says Lesniak, a partner in one of New Jersey’s most powerful law firms, half the brain power behind former Gov. Jim McGreevey (along with onetime boss John Lynch), and for years a party power player.

For all of his connections with South Jersey, Lesniak maintains a nearly lifelong friendship with Codey.

Backing Andrews over Lautenberg is one thing. But it’s difficult to envision Lesniak going after his old pal. It sounds sentimental in the tough guy terrain of New Jersey politics, but he and Codey came up together in public life and they love each other. So however tantalizing Norcross’s offers, Lesniak would be loathe to go against the sitting Senate President.

Sources close to Codey say even without Lesniak, the Essex County politician could hold on to his power in the Upper Chamber.

Whelan’s no gimme vote for Norcross. It was Codey, of course, who poured $800,000 on the former Atlantic City mayor, – more than Codey ever donated to a South Jersey candidate – which picked the candidate up off his stool to finish Republican Sonny McCullough in Whelan’s epic state Senate battle last year.

Then there’s Ruiz. The freshman state senator is a product of the North Ward Democratic Organization and Codey nemesis Steve Adubato. On the surface, she appears to be an anti-Codey lock.

But as the deputy chief of staff of Essex County Executive Joseph DiVincenzo, Ruiz finds herself wrapped inside a more complicated political dynamic.

DiVincenzo has already said he intends to run in 2010. Unless he wants Codey and a politically beefed-up Sen. Ronald Rice (D-Essex) opposing him in an all-out Essex County war, he might consider working with Codey.

Ruiz could be just the bargaining chip he needs.

Whatever Adubato’s designs on his old adversary Codey, DiVincenzo has shown independence from his political mentor, particularly this spring, when he publicly opposed and beat Adubato on the issue of appointing a county party chairperson.

Maybe Norcross would promise to mobilize a part of his empire to protect DiVincenzo in the event the county executive gives Ruiz up to his Sweeney strategy. They already have a close relationship, and it was Norcross’s political team that went to war for Joe D. in 2002, helping to stamp out the candidacy of Tom Giblin.

to vote in favor of Codey, the county exec. might be insuring his own walk-over re-election.

The developing situation in Bergen County, where party Chairman Joseph Ferriero is the subject of a federal probe by the U.S. Attorney’s office, means that Ferriero’s senator, Sarlo, could find himself in the wilderness come January. Whether he would go with Codey or Norcross, finally he’s no certain vote for anyone, particularly given Ferreiro’s troubles.

If he could secure those votes – Ruiz, Whelan and Sarlo, even if Lesniak and his troops bind together with Norcross and his, Codey could still keep his edge – by one vote.

Still, it’s not as simple as North-South.

If Roberts stays, thereby maintaining the Southern command structure intact on the Assembly side, there’s always the possibility that Lesniak and Norcross could work a deal for the senate’s budget chair Buono to advance.

The emergent Sweeney-Buono tag team has already been documented, if not fully cemented. But a Buono candidacy could shape new alliances and potentially jog women senators over to her side. Again, the assumption is she doesn’t go there without Lesniak, and Lesniak opposing Codey outright seems to be a stretch.

Yet there is another dimension to the potential power maneuvering that makes the situation more interesting, and that is the possibility that Corzine would return to Washington to serve in the Obama administration, setting up Codey’s possible absence from the Senate Presidency power struggle.

"Our Wall Street guy," is how Sen. Barack Obama (D-Il), the presumptive Democratic presidential nominee, refers to Corzine, the Illinois native who in his capacity as Senate Campaign Committee Chairman worked hard for Obama in the latter’s 2004 U.S. Senate primary.

Sources close to Corzine say arguably the most devastating event of his life – worse than his divorce, worse than his car accident – was the day he got drop-kicked as CEO of Goldman Sachs. There’s recent precedent for Goldman Sachs CEO’s taking the trek to stand in that long line of treasury secretaries that started with Alexander Hamilton.

If ex-Corzine girlfriend and federal probe target Carla Katz starts to look like a quagmire in that decision zone between November and January and a victorious Obama comes calling, Corzine could make a move.

He told PolitickerNJ.com last year that he would have no interest in a cabinet position in a Clinton administration.

With his progressive views, anti-war vote, Midwestern roots and the daily beat-down politics of New Jersey always on the verge of reaching critical mass, perhaps service in an Obama administration would be a good match for Corzine right now.

Codey sources say he definitely wouldn’t challenge Corzine in a primary, but if Corzine leaves, it’s very likely the former gov. would run for governor.

If Corzine goes, it could provoke Roberts to retire, thereby clearing the way for Sweeney to advance in the Senate. If Roberts doesn’t retire, then Sweeney would be Codey’s likely South Jersey challenger for governor, while Buono could move up to claim the Senate Presidency.

If Roberts stands down and Sweeney moves up, the SJDO would very likely run Andrews, who after his demolition at the hands of Lautenberg in the June Senate primary, could argue he got in that race late, did respectably well given his 11th hour challenge, and can still parlay some of his traction from that encounter into a statewide run.

That would set up Codey versus Andrews, with the probability that a lot of other players would jump into the fray in the biggest Democratic Party free for all since the pre-Corzine era.

But there are a lot of battles, or at least cloakroom struggles, between now and then, and part of what his allies might use as their argument to keep Corzine in New Jersey, is the threat of an all-out North versus South war that would be the likely result of his departure. 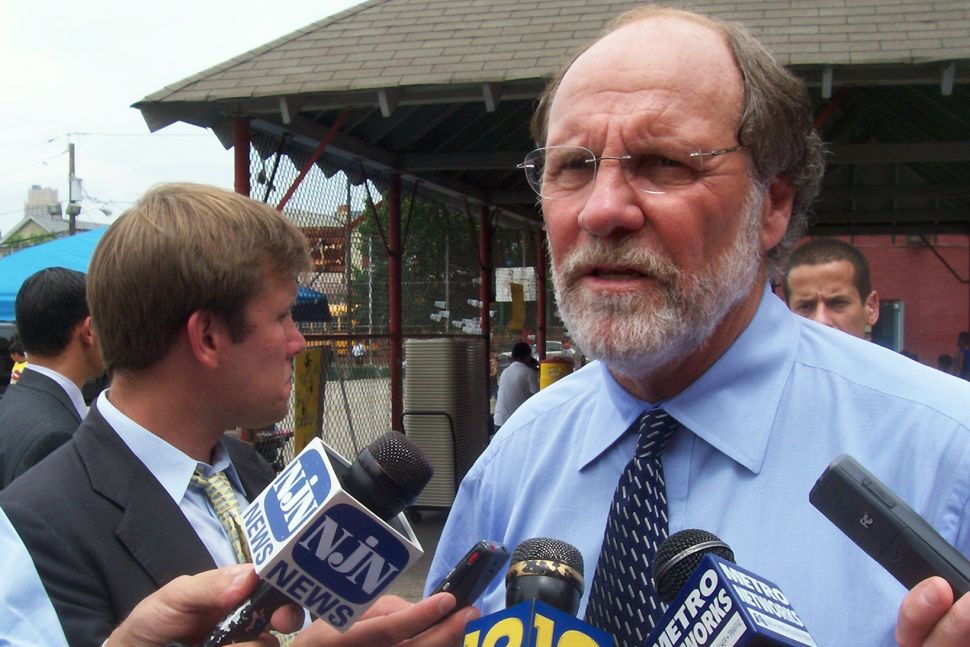