Christie is, in effect, investigating the ex-girlfriend of the man he will likely face off against if he chooses to challenge Gov. Jon Corzine next year.

You won't hear them go on the record about it, but the idea has some Democratic insiders grumbling.

"It sure as hell doesn't look right, I can say much," said one prominent Democratic official.

Partisan complaints, however, are not unusual when the U.S. Attorney goes after a high profile politician.

"You can't get away from the fact that there will be political overtones to this. Having said that, I don't know what the outcome of that is going to be," said Monmouth University pollster Patrick Murray. "I think that Democrats, if they start to cry politics about this, that Chris Christie's just going to ignore it and continue because that's the way he operates."

Despite gripes from political opponents, Christie touts his reputation as an equal opportunity prosecutor who makes no political considerations when deciding who to go after.

Critics, however, will never forget his subpoena of U.S. Sen. Bob Menendez shortly before the 2006 election. According to Murray, Christie is only treading dangerously if nothing comes of the initial probe of Katz.

"If he's looking ahead to 2009, the one place where this could be a potential problem for him is if he investigates and turns up nothing," Murray said. "Then in 2009, it can be used by Corzine as ‘Here's a guy who went on a witch hunt.' But I don think Chris Christie thinks in those terms," he said.

Peter Wooley, a political science professor at Fairleigh Dickinson University, says that any federal prosecutor with political ambitions will have the same dilemma from time to time.

"I don't doubt that Christie's people have made that calculation 100 times. So in a sense, to me this is a very interesting twist in the plot," said Peter Wooley, a political science professor at Fairleigh Dickinson University. "Everybody's going to smell a rat every time you go out there and your office begins an investigation."

Christie could not be reached for comment. But his friend and political advisor, Bill Palatucci, took offense to the notion that there could be even a hint of political consideration involved in the investigation.

"There's seven years as one of the best U.S. Attorneys in the country, taking on Republicans and Democrats," Palatuci said. "Of course PolitickerNJ would think Chris Christie's in a sticky situation because this is the Kushner family web site, so I wouldn't have any comment around that."

Meanwhile, both sides of the Katz dispute said that they didn't find out about the federal investigation until reading about it in the newspaper.

Attorney Paul J. Fishman, who represents Katz in the matter as well as in her civil suit against the union for alleged retaliatory harassment, still hasn't actually seen the subpoenas.

"Because the union has accused Katz of misappropriating funds, I'm not surprised that someone would want to review that allegation," said Fishman. "But I'm confident that any fair and neutral review will reach the conclusion that Carla has not done anything wrong, much less illegal."

But Bob Master, the legislative and political director of CWA District 1, said that the union did not ask the U.S. Attorney to look into the matter.

"The only thing I know about the U.S. Attorney's investigation is what I read in the Star-Ledger," said Master. "We didn't see anything here in New York and (the union's lawyers) have instructed me not to comment." 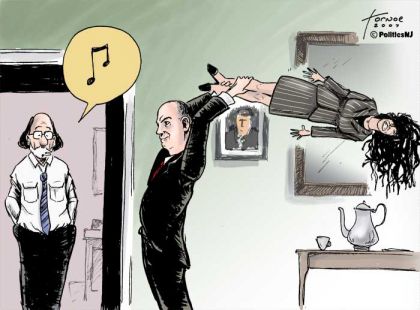