girded countryside in this sprawling town, fifth biggest in New Jersey, where Mayor Jun Choi drinks his coffee on a summer morning in one of the more recognizable roadside haunts called the Plaza Diner.

The suit and tie and modest demeanor belie a man restlessly at work, for if Choi was an enigmatic upstart when he hit the scene three years ago, he has built himself into a surging political force, three-fourths of the way into his first term.

"And I’m running again," he says with a smile.

The Edison-raised kid who came from the inner sanctum of Bill Bradley’s machine-bucking 2000 presidential campaign, former state Department of Education wonk, Choi remains the Democratic Party outsider in a party that still does not know quite what to do with him.

In this third or fourth most populous county in the state, many Middlesex party members don’t like him, and he’s not exactly thrilled by them. Part of the problem, say his opponents, is that the buttoned down Choi aloofly treats the whole party structure as some kind of creepy residue from the John Lynch era.

A former senate president from New Brunswick and the party boss who was one half of the brain power – along with Sen. Ray Lesniak (D-Union) – behind Jim McGreevey, Lynch now sits in a federal prison, serving time for mail fraud and tax evasion.

Choi came in on a backlash to the crumbling older order.

"Government needs to be the force that brings equity to society, and what happens in New Jersey politics is too often you have a political culture that is not driven by a set of issues that matter to this community," he says. "We’re building a new political culture here."

He made some early enemies when he started in office by making cuts. He reduced Edison’s workforce by 10%, or 70 employees.

He established a controversial redevelopment agency and new grants writing program, implemented a new leadership structure for the police department with a civilian police director, and landed more equipment for public works.

He unsuccessfully fought the construction of a Wal-Mart in Edison, but is a critic of his party’s new Council on Affordable Housing plan, which Choi says will slow economic development in Edison.

Overseeing a $130 million budget, this is the first year his administration raised taxes – an average of $158, and his opponents are delightedly gathering ammunition at every council meeting.

Mornings and evenings in Edison are outflow and inflow from the condos and light industrial parks to the train station and parking lots and back.

"People don’t know what’s going on, for the most part," says Bill Stephens, Choi’s 2005 general election opponent. "We live in a bedroom community where the only involvement people have with their government is when they fall asleep reading the paper very late in the evening."

But Stephens – who’s undecided about running again – and other Edison insiders know they’re up against a tough opponent in 2009.

The mayor’s next election is the big one, for if he can fend off – and it will be tough – what will likely be an alignment of opposition Democrats to break him, Choi will be well-positioned in Middlesex County to muscle some of the politicians around him.

"I used to be the newcomer – it seemed like yesterday," says the 37-year old mayor. "And now some days I feel like the old veteran."

Even if he loses, he can still make moves, for what he’s done so far as a virtual loner in the face of an entrenched party has impressed his adversaries – despite themselves.

"He’s great at public relations, great at marketing himself," says Stephens, a former council president and Democrat, who turned Independent to go against Choi.

Stephens says it’s easy to underestimate the man who beat him, who comes across as well-spoken but often appears uneasy in public. Choi admits he doesn’t exactly radiate Dick Codey charisma. Still, when it comes to the political chess board, he continues to demonstrate survival skills.

"He’s very well-choreographed as a reformer, but he’s more old-school than anyone I’ve ever seen around here, and I’ve been here for 62 years," says Stephens, who describes how the mayor uses entities such as neighborhood preservation as cover to build his political forces.

Admits the typically understated Choi, "We have a sophisticated political organization here."

Running as an off the line reform candidate three years ago, he beat 12-year incumbent Mayor George Spadoro in the Democratic Primary. Then in the general, he edged Stephens.

He later lost the municipal party chairmanship by a vote of 93-50 to former state Sen. Thomas Paterniti (D-Middlesex). Choi took the loss, then in 2007 went out and recruited his own council candidates: Melissa Perilstein, AnnMarie Griffin-Ussak, Wayne Mascola and Sudhanshu Prasad.

Serving as their personal treasurer and chief fundraiser, Choi ran them off the line. He even fielded no-hoper freeholder candidates, in order to participate in the county’s ping pong ball drawing, which he did, luckily landing the "A" line.

His council candidates all won, defeating an organization-backed team of local hopefuls who ran on a ticket under state Sen. Barbara Buono (D-Middlesex).

Buono minimizes the damage. Of changing demographics in Edison she says only, "I love the diversity of our district."

Although she won’t talk about it, sources inside Middlesex County say the senator – powerful in Trenton as chair of the budget committee – is alert to the growing Choi machine.

Metuchen claims just 3,880 registered Democrats, while Edison has 21,596, or half the Democrats in the 18th Legislative District. The North end of town is home to a growing – and wealthy – Asian community.

Sources close to Woodbridge Mayor John McCormac say he’s also keeping an eye on Choi. If there’s ever an opportunity to run for Congress in the 7th District, McCormac might be interested.

He denies it, of course. "I’m focused on being Mayor of Woodbridge," he says.

If he makes a run one day, he might have to first deal with Choi in a primary. The 7th District includes about 40% of Edison (Frank Pallone controls the other 60% as the congressman representing the 6th District).In a 7th District showdown with Choi,McCormac would have the advantage of controlling the bigger town. Woodbridge is home to 17,696 Democrats, while Edison in the 7th District numbers 8,237.

Whatever happens in the future, Choi stays focused on bulking up locally.

A year after he lost to Paterniti, the mayor still does not have the numbers to beat the Edison Democratic Party chairman head-to-head.

"But his county committee candidates are out there right now, banging on doors," marvels Stephens.

Paterniti says only, "He’s got a right to screen like everyone else. If he wants to screen, he would be the nominee if he gets the votes of the committee people. When Jun Choi won the primary, I supported him. I’ve also supported anyone the committee votes for."

"I can see where the Edison Democratic Party puts up a candidate against Choi in the primary," he says.

In addition to the late tax hike, one of Choi’s weaknesses may prove to be what Stephens and others criticize as a rubber stamp council made up of "Choi-toys," who don’t make a move unless the mayor instructs them.

"Quite frankly, they don’t have a good idea of what they’re doing because they never came to council meetings before they became council people," Stephens says. "The mayor raised their funds. They never screened with the party. He just ran them off the line. The whole thing was very well packaged."

While Choi has built and financed his own operation and had success recruiting county committee people, he has also taken a stand on national politics – which enemies take to be a sign of his ambition.

Last summer, Choi stood among fellow protestors in a dirt lot on the edge of an Edison industrial park where President George W. Bush arrived in a cocoon of Secret Service and state police for a Republican fundraiser.

"The Republicans may have welcomed Bush here," he cried, "but we didn’t invite him to Edison."

Later that same month, Choi officially announced his endorsement of Barack Obama for president, and stood with Newark Mayor Cory Booker as one of the keynoters of a small fundraiser at the Robert Treat Hotel.

He proceeded to synthesize his local political efforts with Obama’s grassroots movement, headed up in Middlesex by Perth Amboy organizer Julie Diaz.

"I think he probably can see a lot of himself in Obama," says Stephens. "Obama sounds great, but I don’t hear Obama explaining any of these programs and how he’s going to get anything done. Look, I’m a fiscal conservative. When Obama says we need to get that money we’re spending over in Iraq and spend it here, I think to myself, ‘no. I don’t want that money spent. Period.’"

"Choi stuck by Barack Obama, and he was right," he says.

The image of a young political talent on the move has captured people’s attention here, and not just among the more jaded vestiges of the Democratic Party.

Like Choi, grassroots candidate Wilda Diaz challenged a local machine and on May 13 bumped off the longtime incumbent mayor in a shocking upset. She sees the parallels between herself and her Edison counterpart.

Sen. Bob Smith (D-Middlesex), who chairs the senate environment committee, says of Choi, "Edison’s a difficult town, a big and diverse town, and I think he’s working very hard and trying to do his best as mayor."

In the Plaza Diner, Choi pays for his breakfast, and on his way out the door, heading again for his car and Highway 27, a road jumbled among the other highways that spill into Edison, he says, "You got that."

He wants to know for sure as he parts company. 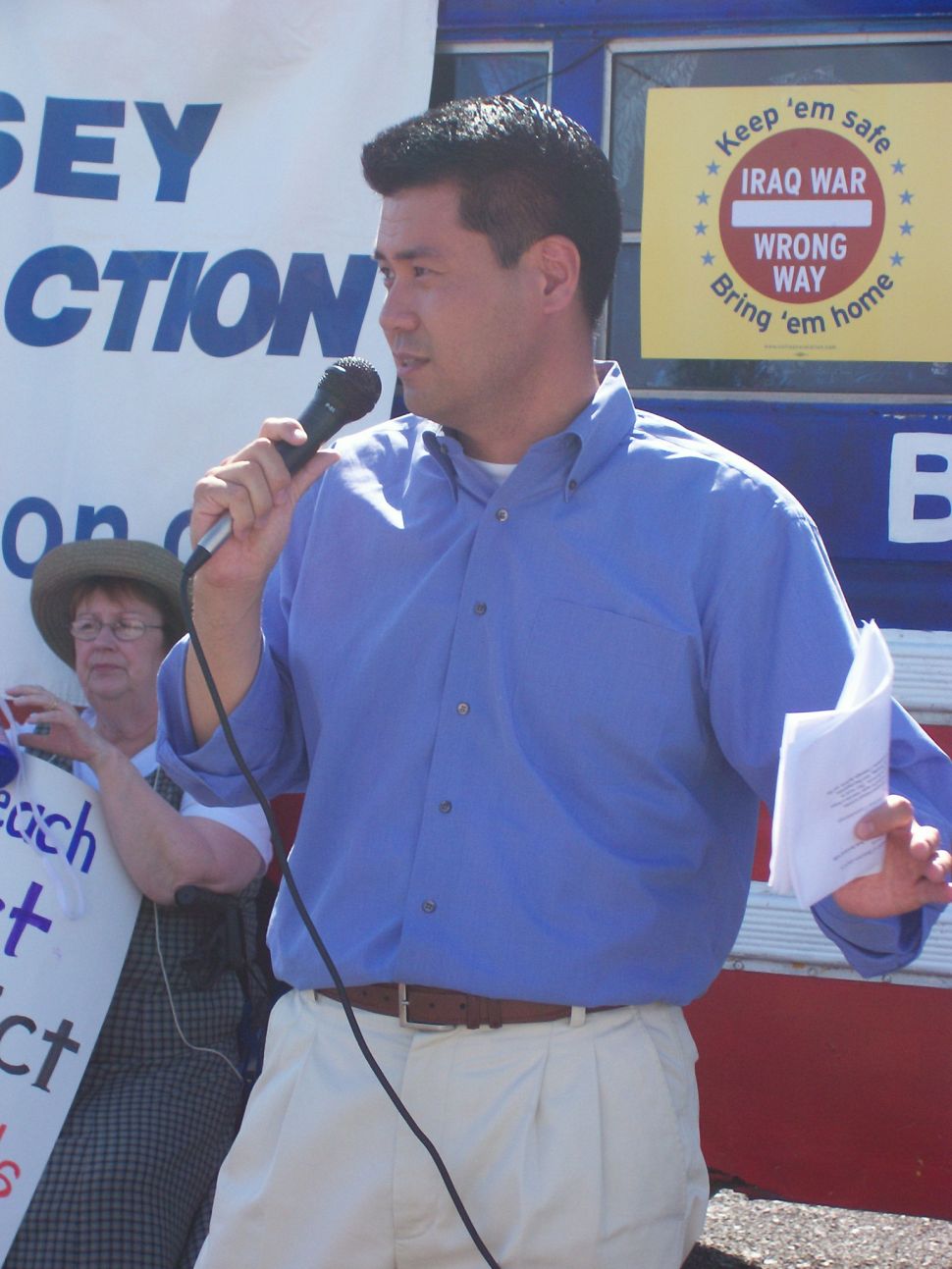