NEWARK – Driven by members of a progressive coalition called Americans United for Change, the Bush Legacy tour rolled into New Jersey this week, reminding residents in both Newark and Trenton of what the group sees as the wreckage of America’s 43rd president.

An interactive museum on wheels highlighting the war in Iraq, Katrina, the environment, skyrocketing oil and gas prices, and Constitutional abuses – the 45-ft. long, 28-ton clean bio-diesel fueled bus parked next to Bears Stadium on its way down from Bridgeport, Connecticut.

"We kicked off the Bush Legacy tour in Washington, D.C., last month (June 24) and we’ll continue traveling coast to coast throughout the summer and fall making 150 stops," said Americans for Change spokeswoman Julie Blust, who stood with local supporters from New Jersey Citizen Action and the Communications Workers of America.

Blust identified U.S. Rep. Scott Garrett (R-5) and U.S. Rep. Rodney Frelinghuysen ®-11) as the state’s two biggest Bush facilitators, and noted how the bus gives New Jerseyans a chance to reflect on how eight years of Bush policies have "left behind an economy in shambles, millions more without health insurance and thousands each day losing their jobs, their homes, and their dignity."

"The Bush Legacy leaves behind a disastrous misadventure in Iraq that has cost over 4,000 Americans theirs lives, wounded more than 30,000 others and has harmed our national security by stretching the military to the breaking point," she added. "This costly and unnecessary war is projected to cost our nation trillions of dollars – all while shortchanging so many critical priorities here at home like education, infrastructure, and healthcare for our children and veterans."

Greg Payton, executive vice-president of the communications Workers of America Local 1081, gave a speech in support of the project then went aboard the bus to view some of the exhibits.

"It’s overwhelming that we allowed this to go on for far too long," said Payton, surveying the Bush era’s public record as interpreted by Americans United for Change. "Why aren’t people in the streets? I’ve never seen the kind of indifference in this country as I have these past seven plus years. It’s really scary."

***For PolitickerNJ.com's interview with Julie Blust, please go to http://www.brightcove.tv/channel.jsp?channel=463872426 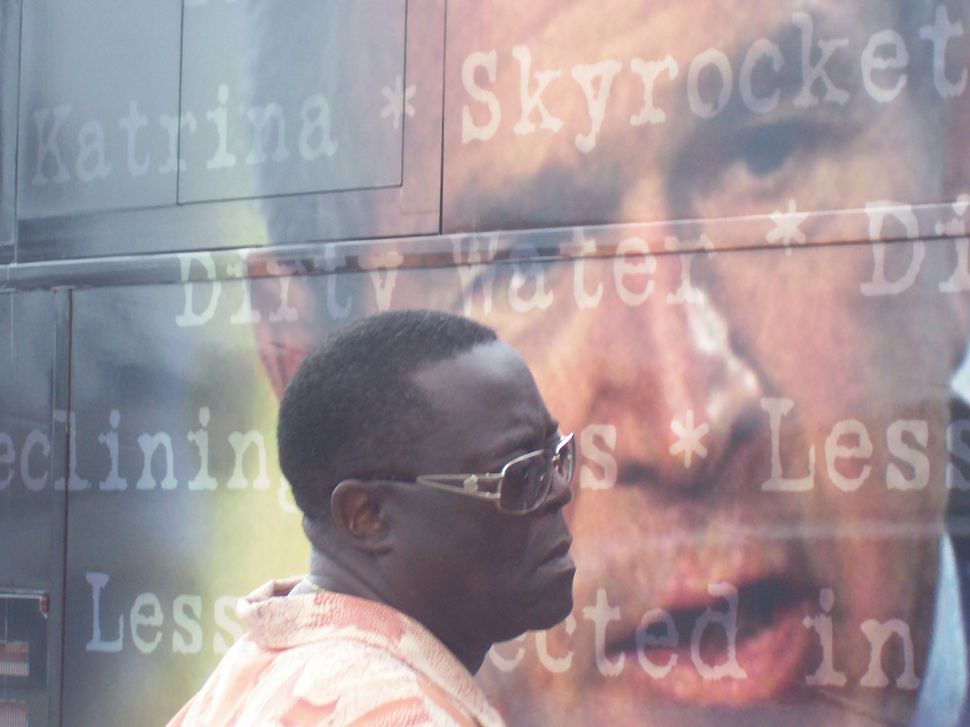