BAYONNE – The rain crashes onto the street and Mark Smith, deputy chief and candidate for mayor, welcomes the downpour with open arms.

"I love it," he says, on the tail end of his door-pounding tour of the First Ward.

In this neighborhood just north of the Kill Van Kull, Smith and his team have walked several square blocks once populated by some of Bayonne’s political legends, including former Mayor Dennis Collins and former U.S. Rep. Cornelius Gallagher.

A 27-year veteran of the Bayonne Police Department and family man, Smith now wants to be the man in his Nov. 4 special mayoral election showdown with former municipal judge Pat Conaghan.

"We’ve got a young team of guys who are hungry," says Smith, seconds before bounding up another row of porch steps. "We’re going to keep walking through the summer, of course, but in September, we’re really going to ratchet it up the operation."

In the team’s point position walks Jason O’Donnell, re-elected last month to his second term as chair of the Bayonne Democratic Party. "This is one of the easiest races ever with this guy," says O’Donnell. "Mark works very hard. He wants it."

So does the party chairman.

Chiaravalotti won in Bayonne but lost to Chiappone in the more voter-rich Jersey City portion of the district.

Now a tripped -up Conaghan on Election Day means Assemblyman Chiappone would also take a jolt, and that’s fine with O’Donnell, who’s clashed with Chiappone over county committee seats, among other issues.

O’Donnell’s and Smith’s family history goes back years in Bayonne, connections forged among cops and firefighters – and more than anything the chairman insists that he wants to see his man win.

"My number one priority is to see good leadership for the city of Bayonne," he says.

Called for comment regarding his past fights with O’Donnell, Chiappone gets in a dig, calling the party chairman "a firefighter who will gain a promotion if Mark Smith becomes mayor."

O’Donnell denies it. "I’m number four on the captain’s list," he says, "and I could care less about the promotion."

"A blind man could see the umbilical cord between Smith and Doria," says the assemblyman. "He’s trying to say he’s not with Doria, but everywhere you see a sign of his up is where Doria had support."

Trudging among the abbreviated platoon of Smith supporters going door-to-door with the candidate on Tuesday evening is veteran Bayonne political operative Mike O’Connor, who points out that Doria dumped Smith’s father-in-law as a freeholder candidate.

"All Tony has at this point is Doria," O’Connor says. "That’s what he and Pat are going to run with, because it’s all they’ve got."

A poll leaked out of the Smith camp last week to the Jersey City Reporter, shows Smith up 20 points over Conaghan and 30 in a hypothetical match-up with Chiappone, in the event Conaghan drops of the race and Chiappone takes his place.

But "That poll is contrary to what I’m hearing," says Conaghan. "My understanding is they did some polls of him (Smith) with Doria and the numbers were awful."

"Clearly, the poll was tweaked for Mark Smith, and was not bonafide," Chiappone added.

O’Donnell insisted there was no mention of Doria in the poll. In any case, his allies are banking on the fact that if there are a few voters in Bayonne who don’t know Smith, they certainly know one of his three brothers or his sister.

"If you look at the signs out here, Weichert would win," dead-pans Leo Smith, a reference to all of the houses for sale. He used to live in the neighborhood, and every time a door opens, Smith’s big brother greets people by their first names in a friendly baritone.

There are a few "Conaghan for Mayor" signs, and more than a few blue and gold Smith signs. The candidate climbs the stairs of a house fronting a yellow Conaghan sign, and a man appears behind the screen door shaking his head before Smith can even make a pitch.

Smith trots double-time down the steps, grinning broadly, and his brother announces that he has to go meet his wife.

"It’s her birthday," he explains. "I told you it was either her birthday or you, and you got an hour. Anyway, you wouldn’t know anyone in this neighborhood without me."

O’Connor, like O’Donnell came up in the political world of Dennis Collins, whom O’Connor describes as the last of the city’s great Irish politicians.

"Collins would go to every wake in Bayonne – every one," O’Connor says. "Other politicians tried to imitate that but the difference was Dennis knew every person whose wake he attended. He knew everyone. He could talk to you today and ten years later he’d remember the conversation."

Collins’ political bedrock was to get a verbal confirmation of support from every person he encountered..

Former Congressman Gallagher claims another sizeable piece of the political legacy in this part of Bayonne. Chair of the House foreign relations committee that passed legislation to create the Peace Corps, he had earlier in his career occupied John F. Kennedy’s short list for vice president, according to Leo Smith.

After threatening all evening, the rain breaks through the heat finally and the Smith Team braves it for awhile before it comes harder, and they run for the cover of a nearby porch, but when the rain loosens, they’re back on the street. 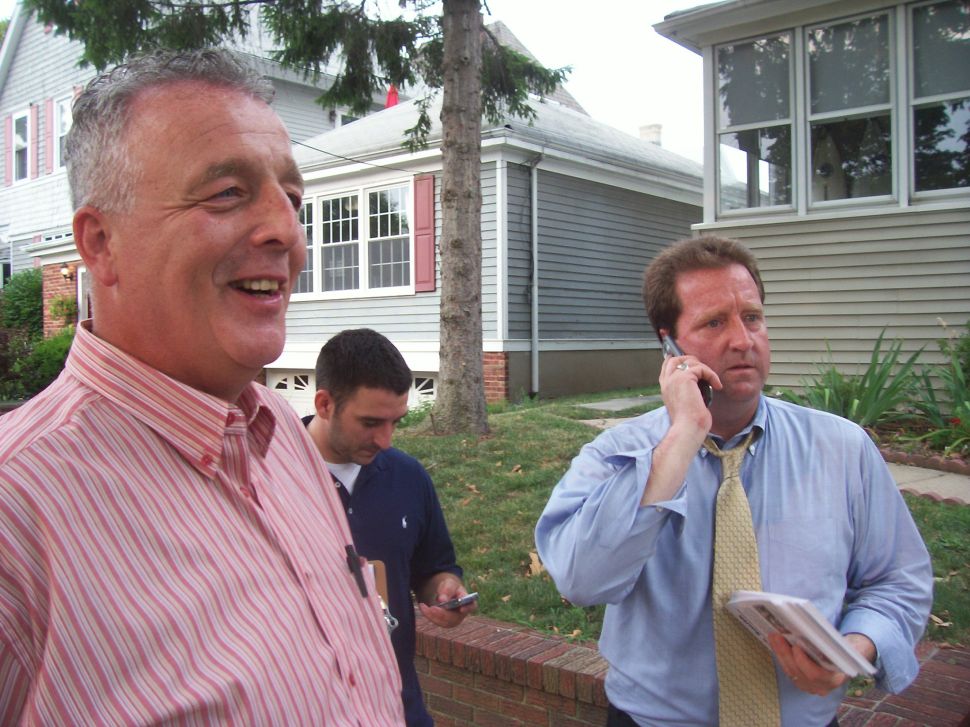