DENVER – Newark Mayor Cory Booker strode up the walkway outside the Bilbao-fangled Denver Art Museum with the state capitol agleam over his shoulder, and the Rocky Mountains behind that rising over the old cross-section of Broadway and Colfax avenues.

"Love Denver," he said on his second day in the city. "Been here many times."

"That’s Cory Booker, mayor of Newark," cried a Denverite, who later said he was originally from Paterson. "Great mayor! Up and comer!"

Moments later, Booker was at a microphone, speaking to a gaggle of press in advance of a forum on education sponsored by the national reform group, Ed Challenge for Change.

"I am honored to stand with a chorus whose voices are lifted in a song of freedom, justice and change," cried Booker, as an urban group of mayors and educators including D.C. Mayor (and Booker ally) Adrian Fenty, New York Schools Superintendent Joel Klein, the Rev. Al Sharpton, and others clapped and cheered.

The message: America’s educational system is in a state of terrible disrepair, particularly when it comes to the needs of the urban poor. On the eve of the Democratic National Convention, this group was here not to poke a thumb in the eye of unions specifically, but to say they’re not afraid to get tough with anyone who stands in the way of improving their constituents’ educational opportunities.

"We have a real challenge here in New Jersey as elsewhere, and we can’t candy coat it," said Booker, an Obama delegate and New Jersey campaign co-chair, who wants more federal resources, in addition to – and separate from – real reform measures.

The mayor’s had his own head-butting sessions locally with the likes of state Sen. Ronald Rice (D-Essex) and others over school vouchers. Rice fingered Booker early as a foot-soldier in the national vouchers movement, going so far in his brief crash and burn mayoral campaign as to suggest that Booker is in Newark to camel nose in a private vouchers model that would weaken public education.

Like presumptive Democratic presidential nominee Sen. Barack Obama (D-Il), the mayor wants strong workers’ unions; but he also wants to eyeball change-time measures such as merit pay for teachers, the flexibility to fire bad teachers, and charter school models where performance, for example, is the constant, and children’s time spent in school is the variable – not the reverse.

In his brief outdoor speech here he praised Newark charter schools – the North Ward Center institutions and others – whose 8th graders are fulfilling the work of 12th graders.

Asked about the political wisdom of putting everything on the table in the way of reform a few months before a national election in which Obama will need mobilized public teachers’ unions to be fired up and full-throated for a Democratic Party platform, Booker said he doesn’t speak formally for the Obama campaign.

"But I’ve been out there for ten years calling for change in education, and I’m not going to stop now because it’s a presidential election year," he said. "We have been wrong on education, and as Democrats, we have to get it right."

After the press conference, Booker and his small Newark team, including a perennial body man and press chief Desiree Peterkin Bell, entered the museum and bounded down a back staircase. The mayor alighted on the lower level in the middle of a wine and cheese party, where he was propelled into a holding room while an audience packed a small auditorium.

"I think it’s a great pick," said the mayor. "He has a wealth of knowledge, and he’s older than Obama, which helps."

But what about the War in Iraq? Obama stirred primary voters with his repeated resuscitation of a 2002 speech in which he condemned the American invasion of Iraq, arguing that he isn’t opposed to war necessarily but "dumb wars."

Now here comes Biden, who chaired the Senate Foreign Relations Committee that "fast-tracked" pre-Iraq War resolution hearings in the words of anti-war critics, and voted to give President George W. Bush the authority to go to war.

"I’m disappointed by that vote," said Booker. "I think it was a mistake. But, my Lord, I hope I’m not judged by my mistakes. This is a fine and accomplished senator who has years of experience as a progressive advocate." 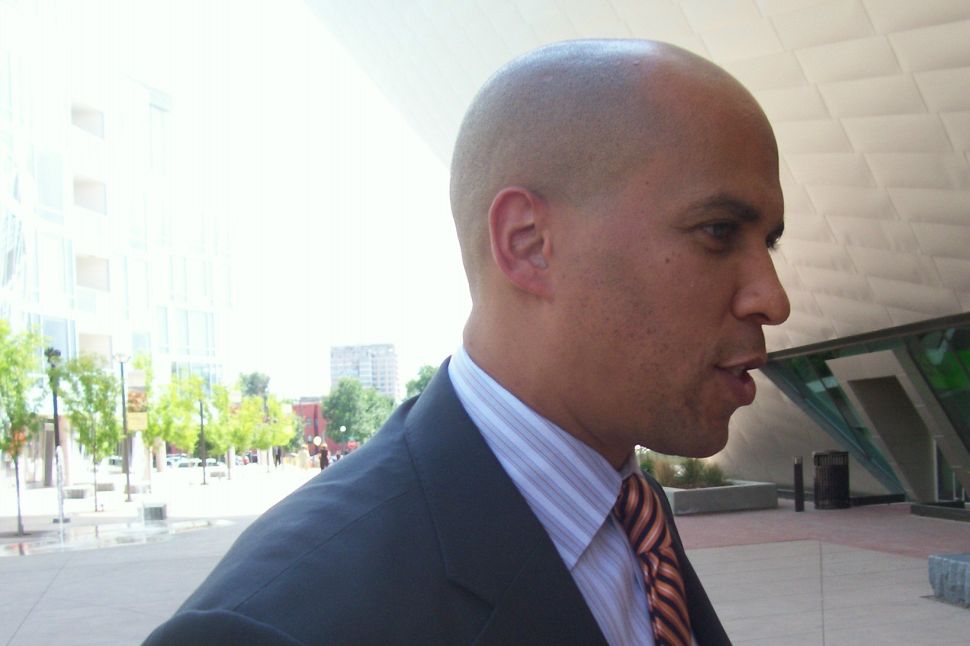