"He seems like an energetic guy," Conaghan says of his opponent, "but he’s a cop. I’ve been on the Board of Directors of two banks, and spent 40 years as a practicing attorney. The most significant thing the next mayor is going to have to do is to wrestle with serious financial issues."

The Conaghan forces contend that former Mayor Joseph Doria blew it on the redevelopment of Bayonne’s Military Ocean Terminal. It should have been a job creator, not a mixed use plan with an emphasis on residential development.

"We need some good industry to bring in jobs," says John Budnick, who peddles his bicycle among the Conaghan forces.

Born on 9th Street in Bayonne, Conaghan, 70, worked at Standard Oil as he put himself through law school at night. He spent over 20 years as a municipal judge. He told Doria years ago that the town needed light industry at the Navy pier but Doria bulldozed ahead with his alternative plan.

"Do they really think housing can work down there?" Conaghan asks. "Every house that you build, with two kids moving in there you’re losing money."

Now Conaghan faces Smith, who enjoys the backing that Doria built up over his nine years as mayor. As part of his effort to beat Smith, Conaghan raised around $70,000 at a recent fundraiser.

"If he wants to debate, he’s got to challenge me," Conaghan says of Smith. "I was the candidate last time, he wasn’t."

One thing Doria tried to do in his campaign two years ago was depict Conaghan as someone who lived down the shore and who was no longer connected to daily life in Bayonne.

Conaghan laughs when he hears the repeated charge. He says he has had a house in Spring Lake since 1972. All through the years he served as a judge, he lived in an apartment over his law office. He went down to his shore house on the weekends, he says, but otherwise lived and continues to live in Bayonne.

"I’m there every night," he says of his Bayonne digs.

As they walk amid a blizzard of Smith campaign signs hanging all over the Hudson County town, Conaghan’s law partner, Paul Weeks, acknowledges that the Conaghan campaign’s most critical responsibility will be to remind people and educate them about the past.

And they will have to do so in the face of a well-financed Smith machine.

"There are about 90 days until Election Day, and we have to fight the illusion they’re putting out there that they’re the frontrunners," says Weeks.

They say that people display the Smith signs in front of their homes do so out of a sense of obligation.

The Smith camp gripes that all Conaghan has to run on is Doria, but longtime Doria antagonist Chiappone says that’s not the case. Conaghan can just as easily go after Smith.

"As acting director of the police department, Smith violated the table of organization when he promoted 14 officers to sergeant," says the assemblyman. "That cost the taxpayers a minimum of $100,000 per year."

Conaghan keeps going, and while his cavalcade heads down 34th Street, the opposition is also working today, as a crowd spills out of the front of Smith headquarters on lower Broadway.

There are 150 people crammed inside with balloons and red, white and blue bunting and the ubiquitous Smith signs on the walls. A campaign worker helps a pizza delivery man offload another round of pizzas.

Smith stands in front of his campaign volunteers.

He points to people he’s known through the years, faces in the crowd who’ve stood with him and whom he wants to represent as mayor. Among them is Joe Calcaterra, a WWII veteran.

"A member of the Greatest Generation, he was with the First Marine Division, wounded at Guadalcanal," says the candidate. "He came home. He came home – to Bayonne – to live the American dream."

Later, Smith reminds them to harness any confidence they may feel for his campaign.

Campaign Manager Jason O’Donnell tells the volunteers to find 25 people on a battle-tested vote ID list. These are people the volunteers will call on Election Day to remind them to vote.

"If we have an event: a debate, rallies, speeches, we ask you to make every effort to attend and help put a positive image on what we’re trying to do here," he says.

Outside on the streets, heading up yet another row of stairs, standing on someone else’s porch, Conaghan says the public should not be fooled by the hoopla around his charismatic young opponent..

"Doria is with Smith," he says. "Smith is a devotee of Doria with no financial background, and Doria’s people just want t continue the party."

Although Hudson County Democratic Organization (HCDO) Chairman Jerramiah Healy says he does not intend to get involved in the race, Smith’s campaign kickoff included the presence of HCDO stalwarts Tom DeGise and Silverio Vega.

"I have county connections, too," he says. "I’m not some rabble rouser who just rose out of the ashes here. But I would not seek their support. These are supposed to be non-partisan elections."

Observing him as he approaches a house with a barking dog, Conaghan supporter Jacqueline McNulty says of her candidate, "He cares. He has to care. That’s why I support him. Think about it. What’s in it for him?"

He announces that he can’t support Smith and when asked why he says, "He’s a Doria man." 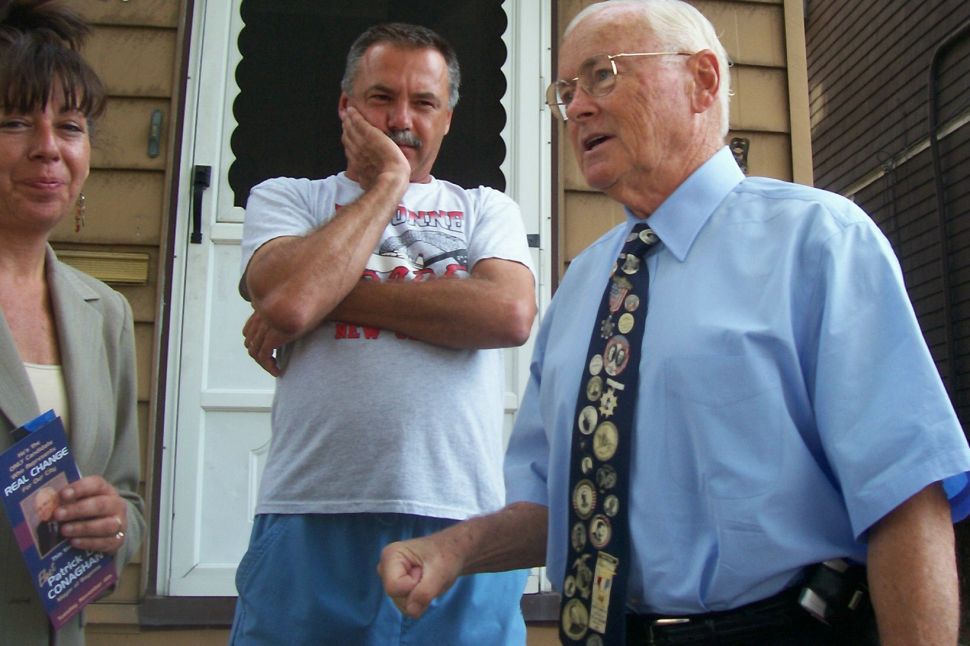