The paneled surroundings of Pal’s Cabin have turned rancor to languor in the case of many an Essex County political rivalry, enabling the likes of North Ward Democratic leader Steve Adubato, for example, to occupy the same friendly booth as his old political foe, Senate President Richard Codey (D-Essex).

On Tuesday, they intend to meet in the West Orange watering hole with Gov. Jon Corzine between them. Alexander’s hoping the history Corzine has with Obama (they go back to Obama’s Senate primary campaign) will help him focus Graham and Graham’s allies.

Even though Corzine backed Clinton in the Democratic Primary, some party diehards associate the governor with the Illinois senator.

“The first time I ever heard the name ‘Barack Obama’ it was from Gov. Corzine,” Essex County Democratic Committee Chairman Phil Thigpen confirmed to fellow Democrats Monday evening at a $200-a-head party fundraiser on the veranda of a Short Hills golf club owned by the City of East Orange.

“When I heard the name, I wasn’t convinced he was going anywhere,” Thigpen admitted of Obama.

“We have a great, great candidate, one who is going to make a huge difference,” Corzine told the same crowd Monday night, on the eve of his meeting with Alexander and Graham.

“It’s going to get tough over the next couple of months,” said Corzine. “People don’t play by the Marquis of Queensbury rules in American politics. We all have to fight. I hope everybody is gearing up. I can’t tell you how excited we all should be about what is happening in America right now.”

Not present Monday night, Graham – along with Al DeCotiis and the Rev. Reginald Jackson – leads a group of hardcore Clintonistas who for the past several months have found themselves in varying stages of painful withdrawal from their primary candidate.

Alexander, the former state director of the Obama campaign, wants to make use of Graham and company’s fundraising prowess (they landed $6 million for Clinton for her presidential run), but to this point it’s been slow-going. Only public relations guru Michael Kempner cut out on his own to declare his full-fledged and enthusiastic support for Obama.

By contrast to the core bulk of skeptical Clinton fundraisers, Alexander, as Monday evening’s guest speaker at the Short Hills fundraiser, described Obama’s campaign as “nothing short of extraordinary,” and an effort “to put our nation’s faith back in the hands of the American people.”

Alexander and Graham have forged a good personal connection, but if some of the Clinton backers will never be able to summon Alexander’s feeling for the presumptive nominee, the Obama team at least wants more solid financial support.

Two weeks ago, Graham hosted a goodwill event in Morristown in honor of State Democratic Chairman Joseph Cryan. Notable for its celebration of the scrappy Vailsburg political operative, the event featured no circle-the-wagons exultation of Obama.

So Alexander this week called on Corzine, whose mission Tuesday is to focus everyone – particularly Graham and his troops – on being Democrats in support of Obama, and beating John McCain come Nov. 4th.

Corzine on Monday night indicated his understanding of what it means to be a player in this particular terrain.

“If you want to be successful in New Jersey politics, it’s all about right here: Essex County,” the governor told the Short Hills crowd.

Then he found the Hudson County-based Sires.

“Albio, close your ears, because I say the same thing in Hudson County,” the governor dead-panned. 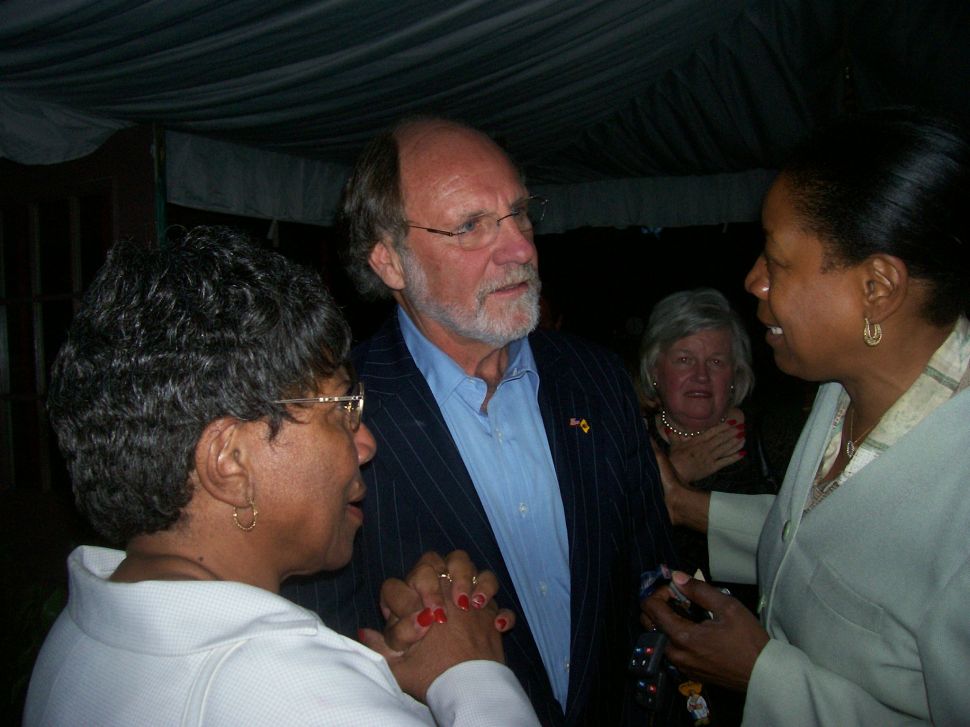