NEWARK – Joseph DiVincenzo knows the joke is coming, and he fields it with a grin – the one broadcaster Steve Adubato, Jr., has delivered for years about how DiVincenzo tried out for more than a half dozen NFL teams and got cut by every one of them.

The fact that Brett Favre is now taking snaps for the Jets sets up Adubato’s new punch line.

"He’s even older than Joe D," Adubato cracks and the roomful of politicians at the Breakers laughs, and DiVincenzo a moment later stands at the microphone, giving a nod to Essex County Democratic Chairman Phil Thigpen, who’s out there in the audience somewhere.

"I’m with Phil Thigpen, not Steve Adubato," DiVincenzo says, a playful poke at his leader, the junior Adubato’s father, who tried to oust Thigpen as chairman earlier this year but ran into a public objection by DiVincenzo, who wanted Thigpen to remain as chair.

Onetime political director for the North Ward Democratic Organization and scion of Adubato, Sr, DiVincenzo was re-elected with 19 out of 22 counties firmly behind him, and now stands midway into his second term as Essex County Executive. He says his administration took the $600 million county operation from a junk bond to an A-1 rating, slimmed the county workforce from 4,200 to 3,500 employees, and created a budget surplus of $18 million.

"I don’t see him as a county executive, I see him as a force of nature," Chief Justice Stuart Rabner says of DiVincenzo as he faces a Monday crowd in the newly dedicated Gov. Brendan T. Byrne Plaza.

"If Joe D. has done anything it’s build the best team in the state," DiVincenzo announces a few moments after Rabner’s remarks, before heaping effusive praise on Gov. Jon Corzine, whom he introduces.

He wants to continue in Essex, where chief of staff Phil Alagia contends the boss remains strong, with $1 million in the bank toward his re-election campaign in a county defined politically by Newark – and the environs.

"We’re strong in the suburbs (where DiVincenzo resides), and strong in Newark, which is where Joe was born and raised," says Alagia. "Newark is Joe’s base."

Essex County sources say Sen. Ronald Rice (D-Essex) could pose a challenge to the county executive, and there are already sightings of Rice 2010 buttons floating around the county. In his 28th district re-election campaign last year, Rice beat the organization off the line, and last year helped turn back North Ward incursions into Belleville.

If Belleville, Bloomfield, Irvington, the Oranges and the South, West and Central wards of Newark lined up with Rice, he could have a shot against DiVincenzo. But getting the factions from those regions in sync and organized on Election Day to withstand DiVincenzo’s machine would prove a difficult obstacle.

Moreover, Rice’s independent streak has not endeared him to some key labor organizations lately, as when he abstained from voting for the AFL-CIO-backed Paid Family Leave bill.

But Rice remains a West Ward folk hero, is unpredictable, and has good relations with Senate President (and former Gov.) Richard Codey (D-Essex).

As focused as he and his team say he is on Essex and on defeating any challenge, DiVincenzo doesn’t rule out a run for higher office as early as 2009 – if the terrain breaks his way.

"There are a lot more things I want to accomplish as county executive," DiVincenzo tells PolitickerNJ.com. "We’re all focused on what’s happening with making Turtleback Zoo self-sufficient and finishing the County Courthouse Complex, which will be the best in the state."

He has very good relations with Corzine, endorses him for re-election in the strongest terms, and says he wouldn’t think of challenging the sitting governor.

However, "If Corzine doesn’t run, would I be interested down the road possibly in running? Possibly," he says.

Political circuits alone could make him a formidable primary candidate.

As Adubato’s heir apparent and the most senior elected official from the North Ward Democratic Organization, DiVincenzo enjoys the operational strength of a statewide political network.

"Joe D. is a great friend and we had a blast, both in the primary and general that year," Ayscue says.

The question is whether an organized and well-timed campaign could produce better results for DiVincenzo than the 11th hour overdrive alliance of Adubato-Norcross, which gave birth to the ill-fated senatorial bid earlier this year of U.S. Rep. Rob Andrews (D-Haddon Heights).

Many believed the boss-backed Andrews candidacy was a test drive for a gubernatorial campaign – with Andrews or another candidate sprung from the marriage of those political organizations’ – assuming the lead role.

With better timing, and the opportunity to labor for county committee backing, DiVincenzo or another candidate in a Corzine-deprived field could potentially win the line in Essex (admittedly a tough feat if Codey were to run), Hudson and South Jersey.

In the match-up between Andrews and U.S. Sen. Frank Lautenberg (D-NJ), DiVincenzo remained publicly neutral, while his people worked behind the scenes to help Andrews.

"Number one, I love Andrews," DiVincenzo says. "But there were issues there. He comes out and announces a month before the election. That just wasn’t enough time. Then this thing with his wife (serving as a placeholder for his congressional seat while he ran for U.S. Senate) didn’t help him."

Whoever runs ultimately – Corzine is publicly committed to pursuing a second term and everyone in the Democrats’ inner sanctum acts like it’s a given he’s running – the Democrats would face a tough opponent in U.S. Attorney Christopher J. Christie, in DiVincenzo’s opinion.

"Chris Christie happens to be a friend of mine," says DiVincenzo. "He’s done an outstanding job as US attorney and he’d be a strong candidate for the Republican Party – if he decides to run.

"I’ve got important relationship with both of them (Christie and Corzine)," he adds. "Corzine has helped with state money – I wouldn’t be able to make the needed changes to our infrastructure without him – and after the last two county executives from this very office went to jail, Christie has helped with ethics. He’s really helped shape this office."

DiVincenzo says he does not expect to see Christie make a decision about running for governor until after the election.

"I think he really enjoys being U.S. Attorney, and if McCain wins, he may stay on," the county executive says. "Chris Christie is the Republicans’ strongest candidate, but I don’t know if he really wants it. I would love him to turn Democrat."

Tested by Adubato when the boss tried to back a replacement for Thigpen in the post of county chairman, DiVincenzo may face a potentially fractious challenge next year if the North Ward Democratic leader tries to dump the independent-minded Assemblywoman Grace Spencer (D-Newark) from the 29th District Legislative ticket.

DiVincenzo says he plans to stand with Spencer, who ran with the support of Mayor Cory Booker and Adubato-DiVincenzo on a successful 2007 ticket with DiVincenzo deputy chief of staff Teresa Ruiz and East Ward businessman Albert Coutinho.

"They make a great team," says DiVincenzo. "I absolutely endorse the team, they really represent the district."

As for the first term Mayor Booker, who is often mentioned as a future candidate for governor if not in 2009, DiVincenzo says, "We work well together. But in terms of mayor, it’s going to take some time. He has to develop a good team around him, and I don’t think he’s there yet. Whatever other obligations he has, that’s fine, but he needs a good team here to take care of business."

It’s a concept he always underscores, no surprise given his place in an organization that stays together to survive; and wherever his particular team goes – back to the county or elsewhere depending on the larger dimensions of state politics beyond his control – DiVincenzo will remain a player – even if it’s not for the Jets. 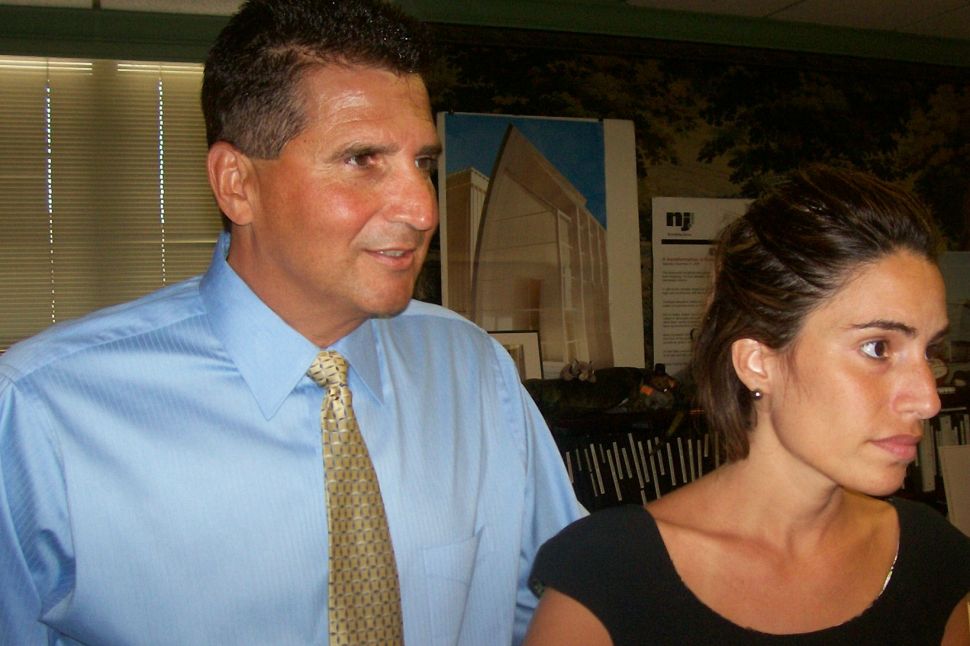