DENVER – No one ever said Newark wouldn’t be tough.

But despite the Brick City ground wars juxtaposed with the lure of a more glamorous national platform, Mayor Cory Booker insists he intends "unequivocally" to pursue a second term as Newark’s chief executive come 2010 – and with the same cast who now comprise the Newark City Council.

"Write it down, unequivocally," says the mayor, seated in the back of Baurs bar in downtown Denver after participating in a Time-Warner panel on the candidacy of Sen. Barack Obama (D-Il.).

He even waved off the Hanoi helicopter scenario, should a President Barack Obama attempt to airlift his New Jersey campaign co-chair from New Jersey into a cabinet or ceremonial appointment.

What if Obama offered him a job as head of Housing and Urban Development, or ambassador to the Court of St. James, or national drug czar?

"Look, even if Barack Obama turned to his running mate and said, ‘Screw Biden, I need Booker,’ I wouldn’t do it," says Booker. "I am deeper in Jersey than a Texas tick. My goal is to run for re-election as mayor with the team I came in with. I hope they again give me the privilege to run with them."

It might be hard to avoid prying at least one council chamber nameplate.

Trying to reclaim her seat through the appeals process after an assignment judge last month hit the ejector button on Rone’s career in public office, Central Ward Councilwoman Dana Rone will likely not be on the ticket.

Moreover, the mayor’s confident outreach to council people who of late have been prickly to his advances, may prove ultimately to be enthusiastic diplomacy in the middle of a political warzone.

And North Ward Councilman Anibal Ramos may find himself prodded into a face-off with Booker if the mayor does not appease North Ward party leader Steve Adubato.

The Booker people appear to have a contingency plan if they can’t keep their coalition together, or if they quietly decide the walls of division are too high to try at this point, despite Booker’s public statements to the contrary.

South Ward organizer Terrance Bankston, who serves as the mayor’s head of constituent services and who tried to become a freeholder earlier this year, is already circulating "Bankston 2010" pens. The top four vote-getters in the at-large council race go on to serve office, and among those currently holding those seats – Luis Quintana, Carlos Gonzalez, Donald Payne, and Mildred Crump – Payne might be the one most at-risk if Booker decides he needs to dump someone.

Newark sources also say Adubato may try to move Ramos up to run for an at-large seat, but North Ward Democratic Organization sources say it’s too early to say.

In any event, Booker shows no public signs that he’s discouraged, or that he could at present focus on a challenge more important than Newark.

The urban numbers aren’t good. African-American families’ average annual income stands at $21,000 compared to $84,000 for whites, according to Davis – a circumstance Booker riffs on at one point.

"I remember when I was running for mayor, my father visited me and he looked out of my window… and told me that he feared we were facing the first generation of African Americans in some time who would not do as well as their parents, but we must stay focused… on islands of excellence, and with those in mind the attitude must be, ‘not can we, but will we,’" the mayor says.

As usual, he gets the most gaping stares from the small audience, the most prolonged applause lines, and it seems as though it’s a long way from City Hall Newark in this charged-up convention atmosphere in glorious downtown Denver, but Booker says no, it’s all of a piece.

"I love our country," the mayor tells Stengel. "I want a country of rich culture in which I’m moved by Irish bagpipes, just as you might be moved by the singing of Nina Simone."

But the hurt exists inevitably.

"The great thing about being a mayor – and this is a gift that Cory and I share, is that we have the ability to test things at the local level," says Newsom. "They may fail, but that is what we can do as mayors."

Booker grins with a grim sense of recognition.

"How great is the failure part?" he says. 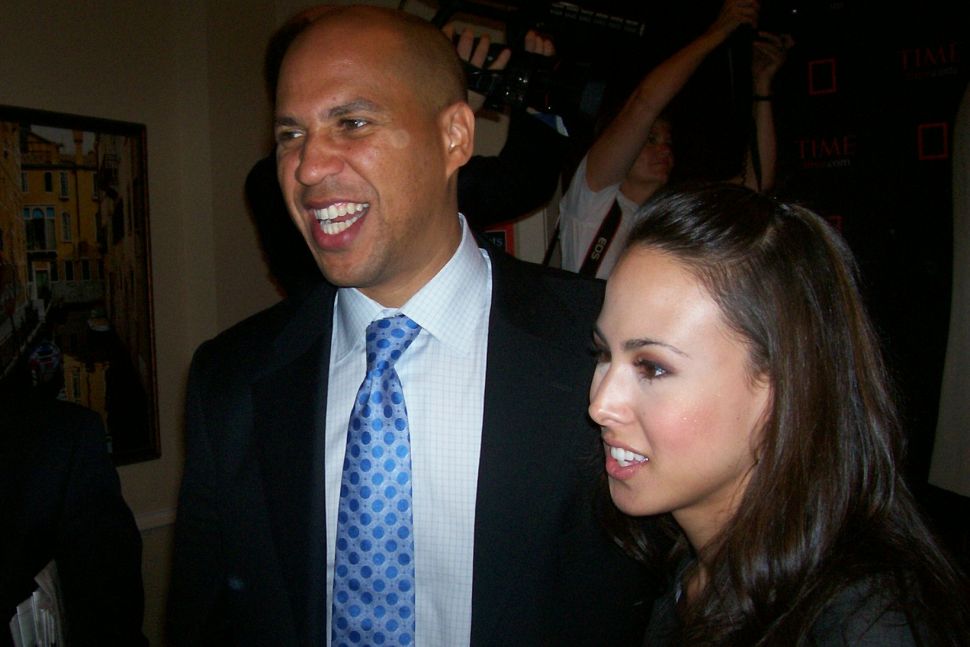