DENVER – If he felt any angst about his first choice not landing a place on the Democrats’ presidential ticket, Paterson Mayor Jose "Joey" Torres didn’t show it as he landed in the lobby of the Inverness Hotel on Monday, and turned his attention on the Republicans.

"We are fighting a war in our cities, but we are not putting the resources in to fight those wars internally," said Torres, who noted the fall-off in federal Community Development Block Grant (CDBG) funding during the Bush years.

Failing in a 2005 fight to terminate the program that administers urban aid, the Bush administration sought unprecedented cuts – up to 20%, the highest percentage proposed cuts since the program’s inception in 1982.

Others can agonize over who’s at the top of the ticket, but Torres wants a Democrat in the White House, he said.

"While Bush has slashed programs repeatedly, Obama would be different, as he realizes where the federal government needs to come in," said the mayor. "He understands core urban problems."

Hoping to gin up Latino support in his city and elsewhere, Torres said he leaned on U.S. Rep. Steve Rothman (D-Fair Lawn) last night in an attempt to convince the Obama campaign’s Northeast Regional co-chair to convince Obama to give a convention speaking role to Sen. Robert Menendez (D-Union City).

"He would definitely be a good choice to speak, because he is a strong representative of the Democratic Party and the Latino community," said a hopeful Torres, but as of late Monday afternoon there was no word that Menendez would receive an 11th hour speaking role. 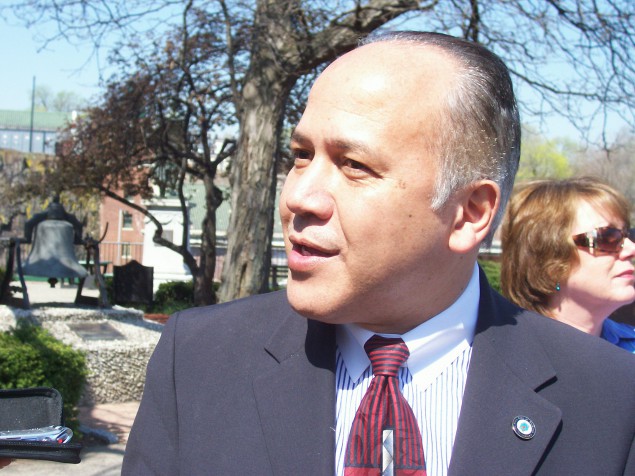