"John Adler and his cronies in Trenton and Washington have stooped to a shameful new low today by doctoring my photo, and lying about my position on the issue of Iraq reconstruction aid, in an attempt to mislead voters and divert attention away from Mr. Adler’s deplorable tax and spend record as a 16-year career Trenton politician," said Myers.

One mailer shows Chris Myers walking next to President Bush (R), though Myers says he has never met the President. “My eight-year old daughter would know better than to doctor someone’s photo and try to pass it off as the real thing,” he said.

Myers calls the content of a second mailer an outright lie. The mailer states: "Even with our struggling economy, House candidate Chris Myers stands with Bush in sending $120 billion in taxpayers' money to Iraq each year the war continues…"

In a press release issued August 6, Myers stated that “while there is still work to be done, news of the Iraqi government’s projected $79 billion surplus by the end of the year means that it’s time to end non-military aid to Iraq courtesy of American taxpayers immediately. American taxpayers have done more than their fair share, and it’s time for the Iraqis to take full responsibility for these reconstruction projects in their own country.” 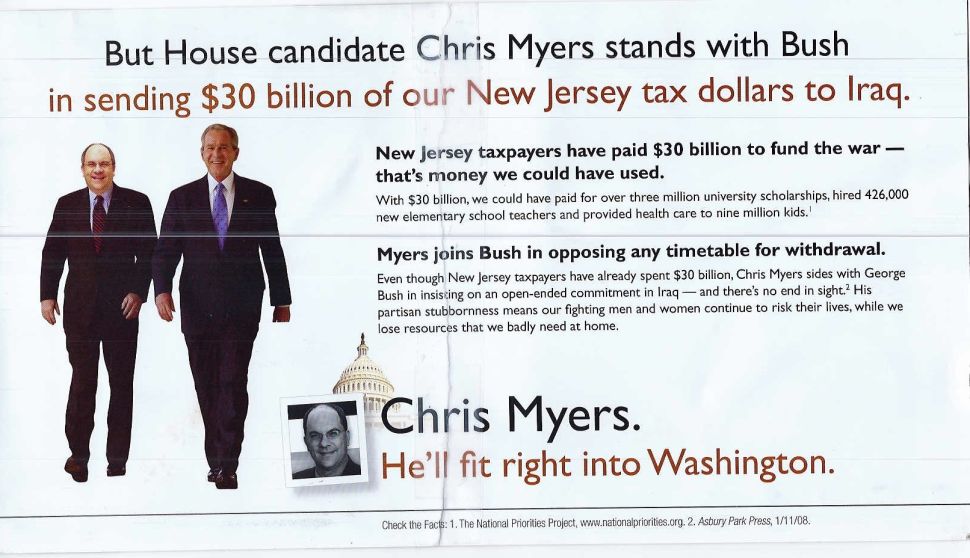