SPRING LAKE – They drove and were driven to the Irish Riviera from all corners of New Jersey, in cars with government plates on them and dark SUVs and sedans with tinted glass, sporting sunglasses and paunches covered with sports jackets, mostly Democrats and a handful of Republicans, converging on this mansion by the sea.

Congressmen and mayors and assembly people and state senators and opposition researchers and retainers.

Standing at the front of the Seashell Dining Room in the Breakers to greet them was Steve Adubato, wearing a Hawaiian shirt and welcoming smile – and casting an eye that invariably sharpens human activity into the lineaments of political theater.

In this poor man’s Olympiad of Jersey ethnic groups gathered under one roof, Adubato highlighted – as he does annually at this North Ward Center-sponsored breakfast – the Irish, who now number 141,379 registered voters in New Jersey, or 47,514 Democrats, 36,063 Republicans and 57,802 independents.

There’s a reason he pays homage.

The political boss’s first significant positive exposure to the rival Essex County ethnic group that historically was mostly clustered in Newark’s West Ward came long ago at the bidding of the late Msgr. Geno Baroni.

Baroni introduced the North Ward-based Adubato to some Irish priests, whom the Italian-American came to see – in his words – as "okay." Today, not only is his confessor Father Edwin Leahy, headmaster of St. Benedict’s Academy, but Adubato makes a habit of grimly reminding those around him that it’s the Irish and not the Italians who enjoy the political upper hand in New Jersey.

Ceremonial to a fault, the boss imposed orders on his son, broadcaster and columnist Steve Adubato, Jr., the event’s emcee.

"He told me just to go out there and have a lot of laughs and a good time, but to avoid certain subjects: property taxes, Dick Codey, Cory Booker, Carla Katz emails," said Adubato, Jr., who continued to run through a list that included just about every political topic imaginable.

If Friday’s annual Irish Breakfast had less of an edge than last year’s, maybe it was because the service award recipients were not politicians, but religious educators from the bowels of Newark’s Catholic schools: Father Edward Glynn, president of Christ the King Preparatory School; Sister June Favata, administrative director of St. Vincent Academy; and Leahy.

Spiritually fitter evidently than their counterparts in the political realm – "Keep death in front of your eyes everyday, it gives you a perspective," said Leahy, quoting St. Benedict, the Newark priests and sister who received honors didn’t offer as many easy openings, and so the speakers for the most part exercised restraint.

As the requisite house Republican, for example, it was a decidedly gentler Sen. Kevin O’Toole (R-Essex) who showed up this time, throwing the equivalent of a couple of verbal elbows – "My Irish father couldn’t be here today – he didn’t want to be here today – in a short speech that was otherwise devoid of the blistering attacks he laid on his Democratic rivals last year.

He and Corzine Deputy Chief of Staff Maggie Moran had torn into each other with abandon in 2007, but there was some kind of Irish truce in the salty air on Friday morning, as even Moran was subdued, throwing out a few cracks that lacked the potentially painful snap of last year’s barbs.

Some of the principals offered introspection rather than war paint.

Always unafraid of publicly discussing the facets of himself, Adubato, Jr., delved deeper into the personal psychology of what it means to be a political boss’s son, instead of going on the offensive.

Then there was Corzine himself, seated at the head table with a cast of political characters that included Adubato, Moran and DiVincenzo and former Democratic Party State Chairman Ray Durkin and his son, Essex County Clerk Chris Durkin.

An Illinoisan who on his best night might embody something of the Midwestern aw shucks earnestness and yearning of, say, a Jay Gatsby, Corzine at his worst can appear to be primed for the Peter Lawford role in a roomful wisecracking Sinatras and Dean Martins.

Yet on Friday, it was Corzine who threw out some of the morning’s best lines.

First, he kiddingly shredded Adubato, noting that the boss had surrounded himself with living spiritual symbols not to celebrate them, so much as to stand in their nimbus.

"The halo effect you’re creating around yourself with all of the religious – it’s brilliant," Corzine cracked.

He later filled the room with laughter as he directed a dig at Newark Mayor Cory Booker.

"I was looking for Cory," the governor said. "But Cory’s actually running Newark right now, since he’s (Adubato’s) down here."

In an attempt to ruffle the GOP, Essex County Clerk Chris Durkin delivered a well-timed barb in the direction of the room’s largest concentration of Republicans.

"This just in," he said, after giving a nod to O’Toole where he sat with former Sen. William Gormley (R-Atlantic) and Republican Chairman Tom Wilson.

"MSNBC has announced that they will be covering the Republican National Convention," Durkin cracked.

The eggs and bacon-glutted crowd stared back stony-faced. Maybe it was the unspoken sense that this was a period of sluggish down time before the conventions. Or maybe there lingered this particular room too broken hearts that once beat steadily for Hillary Clinton.

"Crazy," was all Essex County Democratic Party Chairman Phil Thigpen said when asked about the reaction of Roz Samuels to his decision to release her as a state committeewoman. "She had come to the end of her term. There was no retaliation (fortheClinton superdelegate'searly switch to Obama)."

Adubato was cryptic about Central Ward politics. There’s a vacancy there now and he inevitably will play a role in backing a candidate.

"We’re having talks," he said.

No one made an effort to disguise the fact that Adubato’s presence made this once more an Essex affair.

"It’s the most pivotal county in the state," said Moran.

But it was again Corzine, going for context, who invoked the state’s dean of Irish politicians, reminding the crowd of the wish of former Gov. Brendan T. Byrne, who jokes that he wants to be buried in the notoriously petition-challenged Hudson County when he dies, so he can vote. 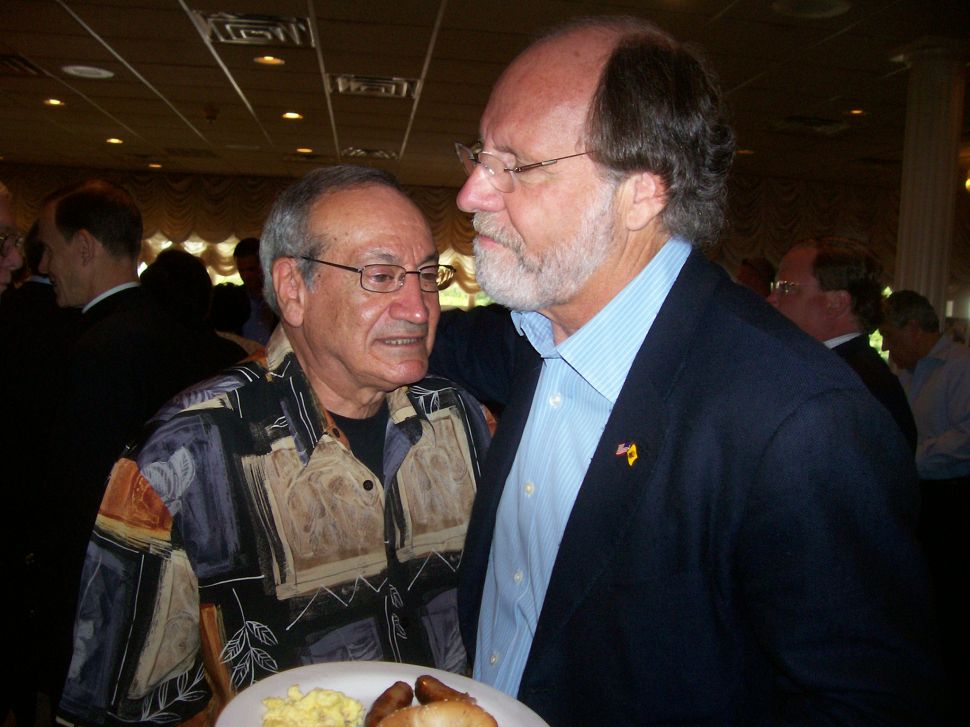