DENVER – The Democratic Party had been splintered all week, and the test of the convention would be whether on the last day Sen. Barack Obama (D-Ill.) resolved the contradictions and moved everyone forward.

The factions were not imagined, or at least one piece of the delegation claiming the loyalties of 18 million voters was hesitant about the presumptive nominee. For New Jerseyans, that faction had particular force. Sen. Hillary Clinton (D-NY) had beaten Obama by almost ten points in New Jersey and her fundraisers had hauled in millions form New Jersey supporters.

Some Monday night drama hinged on Michelle Obama’s shot to prove she loves her children and understands the Middle American concept of family.

However, warm and fuzzy testimonials were already starting to rile the Rev. Reginald Jackson of Orange. Yes, he’d been a solid Clinton backer during the primary, "but we need to deal with the Bushes and we’ve got to define McCain."

That would have evidently to wait.

Tuesday and Wednesday were all about Clinton and her husband, former President Bill, proving they backed Obama, and about Obama and his people proving that they backed the Clintons with the proper symbolic tribute and deft-touch praise in all speeches.

The risk was that the convention would sink so far into a mishmash of Clinton nostalgia and angst that Obama on the final day would be a bland anti-climax. How could he deliver a speech as well as Clinton I and Clinton II? This would be a tough mission even for the usually eloquent Obama.

On Wednesday night at the Inverness Hotel where the New Jersey delegation was housed, the mood was bleak.

Slumped on a couch in the lobby, a former Clinton supporter said he didn’t think Obama would win or could win. The convention was a disaster, with Clinton love barely containable under the trappings of a celebration for Obama that was all a wax figure mirage. That sparked some bitter back and forth.

Newark Councilman Ronald C. Rice, who’d been working for Obama since the start of the Democratic Primary, said he didn’t think there was cause for worry.

Obama was raising double the money as GOP presumptive nominee Sen. John McCain (R-Ariz). He would put new states in play, states like Georgia, where his campaign already has over 50 installations up and running, and Colorado, where the streets of Denver throbbed all week long with Obama fever, said Rice. Obama’s choice of Biden pulled Pennsylvania, maybe Ohio.

Rice was confident, would always be confident in Obama, it seemed.

"I think the party’s in great shape and after his speech tomorrow we’re going to come together," said the councilman.

Hours later, on what some of Clinton’s exhausted supporters imagined would be the fatal Friday of a disappointing convention, former Gov. Jim Florio stepped up at the delegation breakfast and told Democrats to get tough.

"The Swift-boating of John Kerry will look like kindergarten compared to what the Republicans are going to do to Barack Obama," Florio said of the 2004 Democratic presidential nominee.

Members of the New Jersey delegation had spied the Massachusetts senator outside the Palms on Tuesday night. An avid sportsman, Kerry had brought his bike to the convention and apparently, rode 20 miles every morning.

But up close – and this was compared to a good look at him three years earlier when he campaigned in Paramus with then-gubernatorial candidate Jon Corzine – Kerry appeared emaciated and fretful and greatly aged. The essential sadness of his face seemed threefold in three years.

"Good luck to you," he hurriedly told a onetime Jersey supporter as he moved past on the heels of Teresa Heinz Kerry.

Florio’s words carried a particular sting with the impression of Kerry’s face stamped in recent memory.

Fatigue hung over the breakfast event.

Then U.S. Rep. Bill Pascrell (D-Paterson) was at the microphone.

Some of the supporters remember another speech he gave on the day before the Democratic Primary. In a tent in Passaic, Pascrell delivered a pro-Hillary stemwinder grounded with the argument that Clinton was better prepared than Obama to assume presidential command on day one.

Now Pascrell, former Paterson mayor from a family of Democratic Party organizers, gave the week’s hardest-hitting remarks, jolting upright in their chairs a dead-faced audience with the opening pronouncement that GOP brain Karl Rove was going to hell.

"This is an administration that paid the press to fabricate, that has manipulated the truth, that led us to war on doctored intelligence," Pascrell cried. "The truth is that the real theater of operations is the war of ideas. On Nov. 4th, ours is a war as old as our great country – a war won without firing a single shot – when people go out and vote for Barack Obama."

In front of the perfect crowd, he couldn’t resist a plug for his beloved Jersey.

"We love our state," said the congressman. "We defend our state. New Jersey is not an exit. It is the pioneer state. We started it all. We were the first state in the country to clean up our toxic waste sites."

It wasn’t the last line of his speech, but the discomfiting idea that New Jersey might also have been the first state to enable those sites to proliferate hardly interfered with the standing ovation the room gave Pascrell.

It was red meat at the right time – in advance of what everyone hoped would be a similar Braveheart moment from the presidential nominee.

Obama was speaking at Invesco Field, and though it was still early in the day, a lot of delegates and some members of the press corps headed downtown to assure themselves of seats or standing room.

Throwing a last-gasp party was Essex County Democratic Chairman Phil Thigpen, a walking testament to the party’s essential contradictions, who only a few months ago was object of a coup that failed when the clashing factions realized that the no-sweat Thigpen was the only one among them who could hold Essex together.

He was apparently the only person on the landscape who appeared incapable of stabbing someone else in the back for political gain.

Of the Jersey delegation, these two men – and Sen. Robert Menendez (D-Union City) – absorbed the most press attention. Corzine was a morning regular on MSNBC. Booker punched the clock of one big-shot panel after the next throughout the week, giving his views on everything from education to urban poverty, with all remarks undergirded by his commitment to Obama.

"It was good of him to come here today," said Thigpen, seated among those party fundraisers who’d come to this intimate gathering staged in a half-finished condo apartment near the Inverness Hotel.

Having made the local rounds in five minutes, Booker was already bounding down the carpeted stairs and out the door, trailing staff and followers, late for another media event.

"I was young once, too, and ambitious," said Thigpen.

Time was collapsing and moment by moment the entirety of downtown Denver appeared to be falling back to Invesco Field. Bars emptied. The streets cleared.

The Celtic Tavern, which moments earlier had been packed with the liquor-reddened faces of Pascrell and Pallone forces, was suddenly akin to a bar in a ghost town.

The Latino cabby stepped on it as the high-pitched voice of Virginia Gov. Tim Kaine on the radio unleashed a few lines in Spanish.

"This is as far as I can take you," the cabby said. "I think Bill Richardson’s the next speaker. Maybe you’ll be able to catch him. He’s a good guy."

The long run-in from the outskirts of Invesco through checkpoint after checkpoint of SWAT teams and secret service huddle-ups and plainclothes Burger King-headset-wearing sharpies took a half hour, and Richardson’s voice boomed across the flatlands running to the Platte River with Denver in the distance to the north and the mountain chain to the west.

Inside, they went through the lineup: Richardson, Gore and Durbin, and Durbin introduced Obama and by the later reckoning of most Democrats, Obama came out fighting, citing what he said were the failures of the Bush administration and shouting to the crowd of 84,000, "Enough!"

After the speech, Assemblywoman Grace Spencer (D-Newark) walked among the crowd released from the sports stadium into the night. The South Ward organizer came up in politics cleaning litter out of parks and backing Sharpe James for mayor, a Newark attorney now allied with Booker, part of last year’s 29th District change team, overwhelmingly elected.

"Our challenge now is to carry this energy back to Newark," she said.

No starry-eyed Obama supporter, the ward product said she will urge voters to go for Obama in the face of foreclosures, high food and gas prices and lack of dollars for federal domestic programs. She crossed the bridge over the Platte on foot and boarded the light rail line bound for downtown Denver.

And Newark North Ward Councilman Anibal Ramos in the crowd said he’s going to mobilize Latinos for Obama, with New Mexico Gov. Bill Richardson, who’s due in to the North Ward next week to help stir voters.

Everyone was headed home.

On his way, State Democratic Party Chairman Joseph Cryan, a former Clinton supporter, said, "This weekend we’re harnessing that enthusiasm and pounding the pavement to let New Jerseyans know that Senator Obama is offering the change we need."

At all hours out of Denver – "got a red-eye flight back home," said Ramos – the planes were headed to Newark. 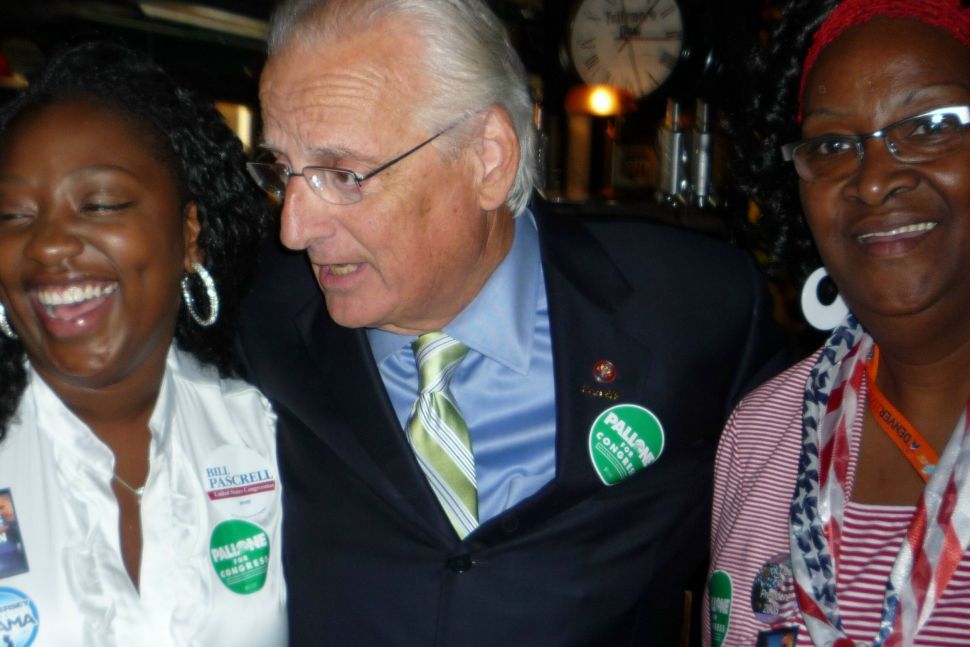