DENVER – It was one of those unlikely big event introductions: the governor of New Jersey revving up the crowd before he rolled out U.S. Rep. Steve Rothman (D-Fair Lawn).

Usually it’s one of the members of the congressional delegation warming up an audience for the governor, but this occasion was different, as onetime Sen. Hillary Clinton (D-N.Y.) stalwart Gov. Jon Corzine yielded to Rothman, a Northeast Regional co-chair of the Obama campaign.

Co-hosting a party with Sen. Frank Lautenberg (D-Cliffside Park) at the Inverness Hotel on the eve of the Democratic National Convention, Rothman hit the two big power chords the Obama campaign hoped to sound with its pick this weekend of Sen. Joe Biden (D-Del.) as Obama’s vice presidential running mate.

"Joe Biden is going to be great at reaching out to working class voters, plus he has foreign policy experience," said the congressman, the only member of the New Jersey delegation to have endorsed Obama from the beginning.

There were scattered hand claps – and a little spark of happiness for Biden.

"He's one of my best friends in the Senate," said Lautenberg, who'd spent the day golfing at the Inverness and showed up at his party in a head-turning, bright blue jacket.

"We don't come from terribly different backgrounds. We've worked a lot on foreign policy issues together, and I've sought his advice on judicial appointments."

But beneath the pre-convention finery, a decided undercurrent nagged at the mood in the room, a mood that even Corzine’s spirited cry of "Yes, we can," couldn’t dispel.

"This is the first time in a long time that the anti-establishment Democrat won the presidential nomination," said Hoboken Councilman Peter Cammarano. "Most of the people in the room were not for Barack Obama."

New Jersey had been hardcore Hillary country, where she thrashed Obama by ten points. The sense Sunday was more than a few people still clung to her, and had hoped to be making the trip out here to cast a winning vote for her – a phenomenon not lost on those New Jersey politicians who did not occupy the Inverness on Sunday.

Drumming on the hurt feelings factor in a new ad, Republicans want Democrats to melt down into a morass of bruised egos, last gasp 1960s decadence, and ultimately inter-generational cross purposes that all add up to a jut-jawed John McCain victory on Nov. 4th.

It may prove a meaningful piece of psychological warfare for the opposition, for it didn’t take much ballroom circulating tonight to get comments like, "Hillary got 18 million votes and Barack got 17 million. You figure best case scenario, he brings those Hillary people over and he has 35 million. But he needs 55 million votes to get elected. Where does he get those other 20 million?"

Several others tried to transmit a sense of excitement before a grimace or unmistakable tone of disappointment gave away the game.

Making his way through the crowd, Assemblyman Jon Wisniewski (D-Sayreville) was asked if he was feeling the Obama wave. He gave a better answer than most.

"It’s probably not the best time to ask me that question," he said. "My wife and I just climbed Pike’s Peak."

If one looks southwest out of the Mile High City, the mountain stands in the far distance, the biggest in that proud stretch of the Rockies, and Wisniewski’s point was that man’s tireless social rumble can’t quite reach what the mountains can – at least not the same way.

"In the end we are all Democrats," was the way Assemblywoman Nellie Pou (D-Paterson) – a big Clinton supporter during the primary – went with it.

Rahman Muhammad, president of SEIU local 617, made the rounds with a rag doll of Obama and a camera, and took as many shots as he could with the big names in the room and the mascot nominee.

And Corzine was scheduled for a 7 a..m. television appearance to hype the Democrats’ cause – that’s Eastern Standard Time, meaning he’d have to be up and in TV form by 5 a.m. – Rocky Mountain Time, a statement maybe that every hour counts toward building unity in a still unsettled party. 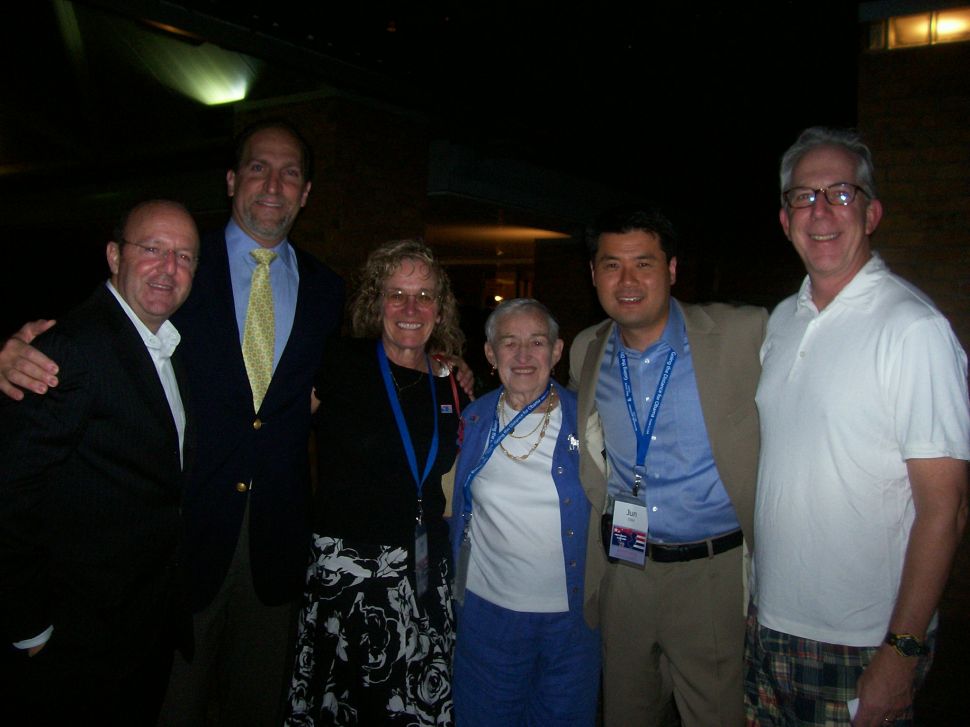