This would be Sen. Hillary Clinton’s (D-NY) "Don’t Cry for me Argentina" moment, and consummate party insider Barrett wanted to make surethe Clinton diehardsgot there for the coming Clinton catharsis.

He settled up with the waiter at the Palms and high-stepped it for Lawrence Avenue where Cavanaugh andcompany were already hobbling double-time on high heels on their way out to hail a cab.

As the Clintonistas piled in, Barrett caught sight of Sen. John Kerry (D-Mass.) emerging from one, and soft-shoeing after a high-class-looking brunette.

Barrett clasped hands with Kerry after the senator sent a furious BlackBerry message to whoever it was waiting on the other end.

"Good luck to you," Kerry said to Barrett, before rushing after his bride.

The other members of the party werewaving furiously to the operative.

It was Operation Hillary.

The cab fireballed its Jersey cargo to a space saucer-like building at the edge of Lodo and the disgorged fragments of the Garden State delegation flashed credentials and promptly padded their way in.

But Lordi Cavanaugh soon realized the mood was wrong. Something was amiss.

It was the wrong building.

Barrett took lunging strides to keep up with theothers who were out the door and already hailing another cab before the doubles had already swung closed behind the New Jerseayans and this time it was, no nuance – straight on to the convention center.

They got there, but there was a line that appeared to stretch into eternity and the shoulders of Lordi Cavanaugh and her friendssagged simultaneously before the former spied a familiar Jersey face among the milling crowd.

"I support the mayor," he said, deflecting a reporter’s quick question about the 2010 Newark mayor’s race, and as he darted onto a bus that might have been bound for Atlantic City for all anyone knew, Barrett and the women bulldozed up the rear just before the door hissed shut, and the charter started off on a chugging circumnavigation of the convention center now and no one really knew where it was headed, but Barrett looked confident and anyway it was Ramos from the North Ward, and soon the packed bus bumped in for a landing at a decidedly less populous entrance point to the Democratic Party mother ship.

Through the police scanners now, Barrett, Ramos and the others ripped into a brisk walk with word that a speech by Kansas Gov. Kathleen Sibelius was murmuring into the convention hall.

They were inside now and into a torch-bearing Olympic sprint through the crowd, Lordi Cavanaugh could feel the Clinton fever as they got closer and in the crowd another Jersey presence was unmistakable.

He joined the footrace, telling a story about how after slamming long ball after long ball into the outfield of Coors, Essex County Executive Joe DiVincenzo had decided to forego his political career in favor of trying out for the Colorado Rockies.

Now the convention hall loomed on the other side of a down-sloping hallway and there was the outline of a man in front of the Jumbotron that stretched massively over the crowd with a Midwestern Democratic Party face on it, but the real face of the man in the foreground came into clear view now and the little party relaxed as U.S. Rep. Bill Pascrell of Paterson smiled in recognition.

They were finally in, and Clinton was still on deck, and a voice spoke the words just to make sure everyone knew it, before he receded into the massive blue crowd. 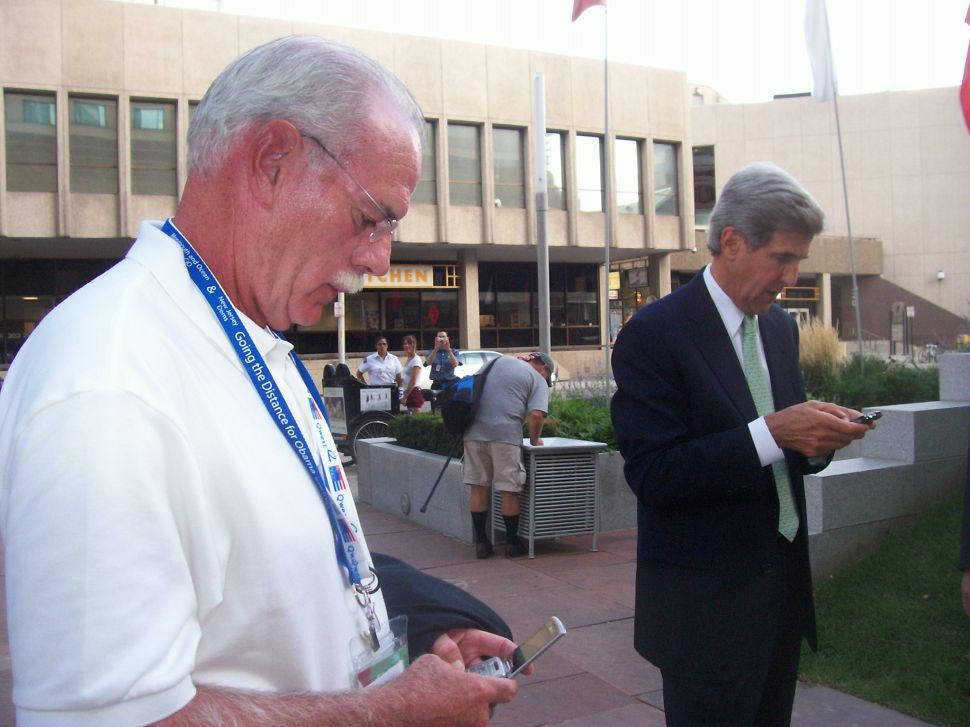