An observation on how the New York Times’ coverage of New Jersey has changed over the years: when Bergen County Republican Chairman Anthony Statile resigned in 1973, the New York Times wrote five separate stories on the special election to replace him – but did not cover the passage of the state budget in 2008. The promotion of David Chen from Trenton to New York City Hall ends a chain of highly influential New Jersey-based New York Times reporters (like Joseph Sullivan, Ronald Sullivan, David Halbfinger and David Kocieniewski) that influenced New Jersey politics as much as any in-state newspaper. As recently as 2001 and 2002, the NYT played a key role in ending the political careers of Gov. Donald DiFrancesco and U.S. Sen. Bob Torricelli.

Another observation on the changing coverage of local politics as a result of new journalism economics: the Star-Ledger, which has dominated the coverage of Union County since the Elizabeth Daily Journal folded in the early 1980's, didn't even bother to report the election of a new Assemblywoman on Tuesday night. Annette Quijano's victory (by five votes) for Neil Cohen's vacant seat was reported at 6:22 PM on Wednesday. 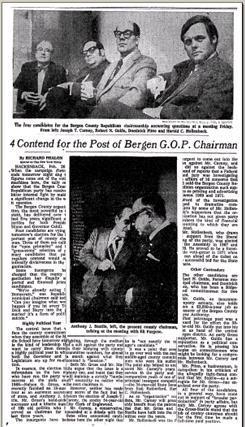