DENVER – It was coming to an end in an Irish bar, only it wouldn’t actually end there. It would in another bar, a few blocks removed.

Two bars separated by one speech.

"It should be a walkover, of course," said U.S. Rep. Donald Payne (D-Newark). "These guys – Obama and McCain – are neck and neck. I think it’s perhaps the trepidation about race that makes it that way, but we'll see."

In a few hours, Sen. Barack Obama (D-Ill.) would take the stage and accept his party’s nomination.

The Celtic Tavern is located near the light rail line, and soon the delegates and superdelegates and other guests would pile aboard and head out to Invesco Field to see and hear Obama.

In the meantime, the hosts brought Speaker Joe Cryan up onto the stage with the folk band to take a bow. Just as they were stepping over the microphone cords and getting ready to launch into the Irish songs, the bar door swung open and Jersey City Mayor Jerramiah Healy walked in, prompting Pascrell to make a special introduction.

It almost looked staged, as if a staffer had sent Healy a text message. Healy's a good Irish tenor with a rich, well-modulated voice.

But the mayor’s stride-in would astoundingly prove a premature entrance to the main event, for on this afternoon, Sen. Robert Menendez (D-Union City) went to the front of the room.

There were some guffaws and wild hand claps among the younger set. Was this a joke? How could Menendez of all people deliver on an Irish folk song? But the laughter died a fast death under some hard stares.

There were some other bar testimonials to Menendez's Irish improv, and soon Menendez began, singing in a gentle – it would be such a cliche to say it, but it was true – lilting voice.

He brought the house down.

Whether it was exhaustion or karma that made them so, the partygoers here appeared all of a piece within the New Jersey Democratic Party galaxy, giving it up for the Cuban-American interpreter of Irish folk music.

"Let’s talk after the Republican Convention," Sen. Frank Lautenberg (D-Cliffside Park) would say later in the evening, after Obama’s speech. "What I want to do is ask you to compare their convention and their delegates, with ours and our great diversity."

"You’ll see a huge contrast with the conventions," she said. "What you’ll see with the Republicans is a convention with no diversity."

The labyrinth of emotion – not invented by the press to break the tedium of tear-jerker speeches, but a real function of many disappointed Sen. Hillary Clinton (D-NY) supporters still clinging to her candidacy – needed to end on an upswing, releasing the delegates back to their states on a wave of energy.

The intra-party forces were coming together at the Celtic Tavern, epitomized perhaps by Mark Alexander, senior advisor to the Obama campaign, socializing amiably with Clinton fundraiser Caren Turner.

"We’re working on her," he said of Turner

Pallone agreed that conventions are theater, whose success is built on a simple dynamic of conflict-resolution.

"We’re ending unified," he said at his party, and if the Democratic Party is many things, a conglomerate of seemingly contradictory strains, and the dominant political force in the vastly diverse State of New Jersey, the thought here was that it finally can’t survive without the drama.

At Corzine’s post-convention party where the eight-man soul band laid down some bass-heavy funk, Bill Payne and Sen. Teresa Ruiz (D-Essex) boogied on a dance floor where the 84-year old Lautenberg pushed the crowd back with herky-jerky dance moves, and grassroots Obama supporters grooved with old machine Democrats.

"It was a homerun," Congressman Payne said of Obama’s speech. "Just an absolute homerun. It was dead-on right."

"He took the fight to McCain and we needed that," said West New York Mayor Sal Vega. "We needed him to go in there and make this a fight and he did that and unified the party."

Heading back to New Jersey for his own fight in the 3rd Congressional District, state Sen. John Adler (D-Camden), an Obama supporter from the beginning, said, "We're going to keep fighting. This was a great night, and Sen. Obama delivered an outstanding speech."

Floating everywhere among his guests was Gov. Jon Corzine, leader of what had looked like a fragmented delegation coming in here, who took to the dance floor with abandon. 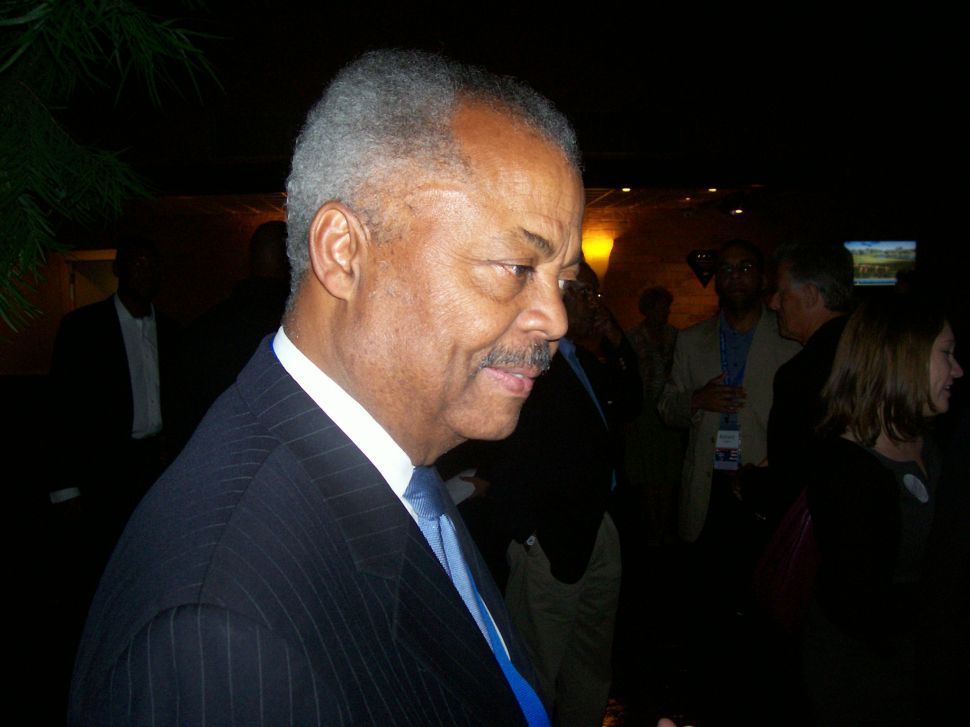