DENVER – The clash of speaking styles could not have been more dramatic.

There was U.S. Rep. Bill Pascrell (D-Paterson), consigning Karl Rove to the most fiery furnaces of Dante’s Inferno, and putting extra incisors in the teeth of the party attack dog on the tail end of a Thursday breakfast in which half the crowd had appeared asleep before Pascrell arrived and roused them.

Then came Gov. Jon Corzine, and one could almost imagine the house lights again going way down as he began his morning remarks.

On the 45th anniversary of Martin Luther King, Jr.’s "I Have a Dream" speech, the governor went to that oratorical touchstone to refer back to something even earlier, which King had also invoked in his 1963 speech: the words "All men are created equal" in the Declaration of Independence.

"We now have an opportunity as a nation and as a human race to make that real," Corzine told the crowd. "We will be as hard as Joe Biden’s mother told him to be, but we shouldn’t lose track of the fact that there is a vision for a better world."

It was a quintessential Corzine statement, delivered in the most self-effacing Midwestern tones. Every time he slid a Jersey edge into his rhetoric, as when he roared moments later that Democrats are in the hardest fight of their lives and have one hell of a chance, he still carried the thought to a idealistic conclusion.

"We can deliver the American Dream to everyone," he said. "It is about hope and possibility."

Through the week he was fundraising, partying, networking, giving interviews, shaking hands, speech-making and hugging.

Struggling at home with an approval rating that typically hovers in the low 30s, Corzine has perhaps never appeared more comfortable than here in Denver this past week, shouldering a scrappy Jersey delegation on an-away field.

"The National Convention has historically been a time for party leaders to rally the troops," said Ben Dworkin, director of the Rider Institute of New Jersey Politics. "Jon Corzine at this convention seemed to do exactly that. He is the leader of his party, running for re-election, and anybody who’s thinking of challenging him has to consider that."

It was Corzine’s convention.

It’s the first time as governor he has led this team to the Democratic Party’s big dance, and for a diverse and potentially fractious group of delegates, he acted as bearded father figure and cosmopolitan world traveler – the former Wall street exec./U.S. senator with octopus arms stretching into every powerful corner of the country.

"Clearly he’s a national figure, based on relationships he’s built over the years," said Assemblywoman Linda Greenstein (D-Monroe). "People all over the country in this party identify him as a great governor because of his efforts to restore fiscal responsibility to New Jersey. I hope the people of New Jersey see it that way."

Plus, they have help in Washington, D.C.

At a bar downtown thrown by her friend Pascrell, U.S. Rep. Linda Sanchez (D-) chair of the House Judiciary Subcommittee on Commercial and Administrative Law, told PolitickerNJ.com that she is confident, if necessary, that she will be able to secure a subpoena for Christie to testify in the weeks ahead concerning his role in appointing his former boss, Attorney General John Ashcroft, to a federal monitoring contract that could net Ashcroft over $50 million.

That could bog down Christie at precisely the time he’s trying to overcome lack of name ID.

Meanwhile, the announcement by Assemblyman Richard Merkt (R-Randolph) that he wants to run for governor in 2009 prompted Corzine to smile. "The more the merrier," he said, and his supporters noted that even if Christie muscles second tier candidates like Merkt and becomes the nominee, Corzine will wear him down with a $20 million war chest.

Sources say he’s also planning to put together another package of ethics reforms in the coming months, which might blunt the strongest message of the crime-fighting Christie, but on the downside, also further estrange those in Corzine’s own party who worry about how government reforms weaken the Democratic Party’s ability to wheel and deal.

And if the biggest drama of the convention involved tensions between the Clinton and Obama camps, Corzine – an impassioned Clinton backer in the primary – rose up out of a potential emotional morass when on the floor of the Pepsi Center he delivered New Jersey’s 15 electoral votes to Obama, and started a steadily building chant: "Yes, we can, yes we can!"

A lot of delegates thought that was a solid statement in favor of party unity. "People told me all day that New Jersey did the right thing in giving over our Hillary Clinton delegates to Barack Obama," said Pascrell. "It’s because of our governor, and Joe Cryan."

Hounded by reporters’ questions about off-the-record comments by those Clinton solids who this week continued to say that Obama’s people had dissed the New York senator, Corzine identified himself as a Clinton supporter who was happy to embrace Obama.

"I’ve been a Clinton worker bee," said the governor. "I’m proud of what she’s done, but it’s time to move on."

One of Corzine’s New York fundraisers, another Clinton diehard, told him she intends to vote for Sen. John McCain (R-Ariz.).

"But otherwise, everyone’s on board," the governor said.

Corzine’s ability to navigate, both ideologically and temperamentally, that Obama-Clinton divide and line up finally and firmly with the victor Obama, appeared convincing to most observers in the delegation.

No lifelong creature of smoke-filled back rooms, he arrived in office as a private enterprise progressive, whose first work in the U.S. Senate was to help craft corporate reform in the wake of the Enron scandal. As a governor, he launched global warming response measures, enacted paid family leave, and did away with the death penalty – all liberal initiatives. Like Obama, he opposed the Iraq War from the beginning.

And Corzine’s roots are in Obama’s Illinois.

So it was no leap to picture New Jersey’s most famous baby boomer landing in the Obama camp, and even if his national credentials gave him wider reach than most who came here to Denver, finally it was difficult to picture Corzine in any other camp at this point but the one occupied by this party.

As he gave the state’s electoral votes to Obama, he lauded his adopted state for its entrepreneurial spirit and, yes, he noted with pride over the hand claps that rose behind him among those in the New Jersey delegation, "Its attitude." 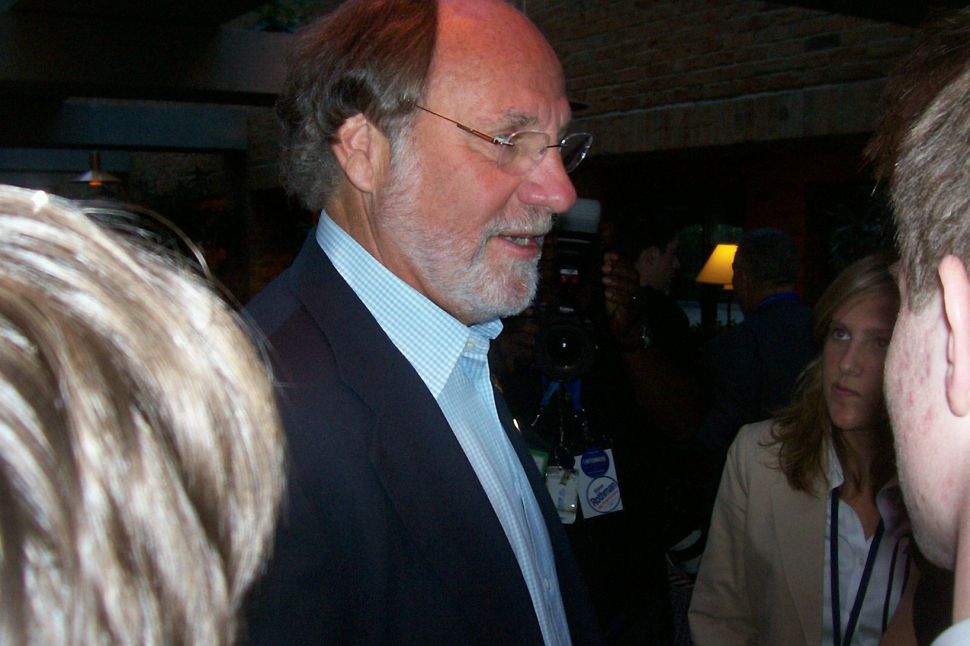