Subpoena activity in Paterson on the day Gov. Jon Corzine pulled the cape off of a sweeping new piece of ethics reform provided an ample reminder of another presence on the political landscape.

As some Democratic Party strongmen fume quietly about Corzine’s efforts to weaken the fundraising capacities of leadership committees in the third year of his gubernatorial tour of duty, hispotential Republican opponent in 2009 is going through his own "anything you can do, I can do better" ritual, to hear the back-chatter in the state right now.

At worst, Corzine’s ethics package is a quick prep phase for what Democrats are certain will be another autumn appearance by Christie, who last year in early September decimated a statewide corruption ring and left the Democrats in a shambles trying to defend their recent ethics legislation.

At best – to the most cynical – the newest ethics package signals what state Sen. Brian P. Stack (D-Hudson) calls some "better political thinking," which he would like to see practiced by the Corzine administration.

After all, Christie’s record suggests he’s coming with something.

The question is whether this time the U.S. attorney’s quarry will be the remnants of Operation Broken Boards, which felled 11 officials, but left some loose ends that many observers feel Christie will now resolve in short order – prior to the Nov. 4th election.

Or will it be bigger, on the order of more big fish reel-ins in Bergen County, for example?

To the first point, the feds’ arrest last week of Passaic Councilman Gerardo Fernandez – charged as a member of corrupt former Mayor Sammy Rivera’s circle, which he vigorously denies – sparked nervousness in council chambers Tuesday, particularly concerning the fate of Councilman Joe Garcia, who may also have been connected to Rivera.

"Everyone around here is waiting for the other shoe to drop," admitted Alex Ybarra, campaign manager of mayoral candidate Vinny Capuana.

To those who are waiting for the Christie indictments to start raining down in force, the governor’s Grade A beef ethics package unveiled just weeks before Election Day, gives Corzine an opportunity to gird himself for another trip-wire of allegedly corrupt public officials.

It’s stronger than last time, argue Corzine’s allies. Not only does it set the governor up for a re-election bid next year – but, just as importantly, it gives him more solid cover in the cringing days and nights leading up to Nov. 4th.

Republicans last year savaged the governor’s efforts to put an end to the practice of holding more than one elected office at the same time because the majority party’s bill in the GOP’s view shamelessly grand-fathered a generation of double-dippers.

After the legislation, roundly panned as weak-kneed, passed, and then the 11 public officials entered the public consciousness in leg-irons and handcuffs, State Democratic Party Chairman Joseph Cryan acknowledged that legislators would likely have to craft tougher ethics laws.

Fernandez’s arrest last week in front of his home in Passaic, and the subpoenaing of the Paterson Police Department yesterday proved to watchful Democrats that Christie is pawing the turf with his sights on past and future indictments.

Corzine and his team figure this time, they will be better prepared.

It will be a showdown, at least, with the Democratic Party argument in the face of more heads rolling that "We’re out in front of this," which will, of course, be criticized as political and too little too late, but in their minds is probably better than enduring the all-out butt-kicking Christie put on them this time last year. 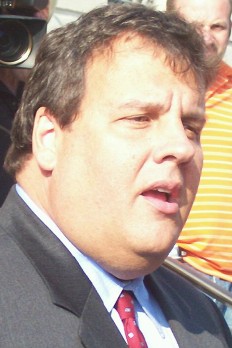