BAYONNE – The bands of men move through the streets on separate ends of Avenue C, claiming city blocks as territory for their respective campaigns.

There are other men running for mayor in Bayonne, but Police Director Mark Smith and retired Municipal Judge Pat Conaghan remain the most dogged public competitors, and their followers the most intense.

The signs stare out from everywhere as evidence: Conaghan for Mayor, or Smith for Mayor.

Across the river, Wall Street’s tanking. Worst day in its history.

But Bayonne’s been feeling pain for years. They have a history of pain, of course. Not for nothing the local boy who once challenged Mohammed Ali for the heavyweight crown, Chuck Wepner, still walks Broadway Avenue and goes by the nickname “Bayonne Bleeder” in boxing circles.

Here they prefer to call him the “Bayonne Battler.”

The former title may be more appropriate, for now the city faces a $22 million budget deficit. A mixed use project slated for the closed down Navy yard once was supposed to save this maritime blue collar capital at the bottom end of Hudson County, yet at this point, even that project’s champions say they need to reexamine the harbor.

Grim, purposeful Conaghan walks the blocks on the upper end of C, the lead man in a platoon-sized group of men lugging signs and clipboards with names of registered voters written on them. The judge lost to incumbent Mayor Joe Doria last time in the run-off – just barely. For him the difference-maker now is the effort he’s putting into his campaign. He’s walking every evening, five times a week.

His campaign estimates that they’re distributing 150 pieces of literature each day, and they’re feeling their stride now compared to a month ago.

Some of the Smith people didn’t think the judge would walk. They didn’t think he’d be wired for this the way he is, but he’s obviously putting a lot into it, though money remains an issue.

“Give me a contribution and I’ll answer the question,” Conaghan cracks when asked about campaign finances.

Then he goes on the attack.

“I’ll tell you this, they’re not working with as much money as they thought they’d have,” he says of his rival’s team.

“Our polls are showing a dead heat,” says Chiappone. “At first, voters liked Smith. They saw a fresh face. But as time has gone by, we’ve been getting our message out there in these door-to-door encounters, and people realize that Smith and Doria are together.”

Each man tackles a different house, and if they can seal the deal and get a homeowner to agree to back them, they quickly summon one of their sherpas with the signs and suddenly the younger volunteers charge up the stairs – before a voter can second guess himself – and tacking “Conaghan” signs to the porch railings.

News of the Dow Jones Industrial Average falling 777 points, it’s biggest drop ever, has Conaghan shaking his head. His money’s safe. But partners are taking hits. He can’t believe the instability out there. He’s been warning for years about local government taking too much, taxing too much without developing a ratable base.

Members of his team sound that theme.

“The crisis reflects what we’re seeing in Bayonne,” says Wilbeck, a public school vice principal. “Bayonne right now is on the brink of being taken over by the state, and the county hasn’t helped. The county’s putting a 5.1 percent tax increase on us – and we’re a city already in distress. They’ve had the credit card mentality here. Doria was the champion of it, and now he’s gone (to serve as director of the state Department of Community Affairs) and stuck us with the bill.”

Doria’s negatives are indeed high in Bayonne right now, but Wilbeck has been running for years, with no success. He’s tried for the council. Twice. And one other time for freeholder.

Why does he think this year is any different?

“At this point,” Wilbeck says, “the people of Bayonne are definitely looking for a change.”

Exactly thirty blocks south, their chief opponent, Smith, runs up yet another set of steps. The houses are packed tight on the Bayonne blocks, and the garages in most houses are tucked under the front porches so campaigning here is all about making that frontal charge up the front stairs.

His men walk with him. Campaign manager Jason O’Donnell is on duty at the firehouse tonight, so it’s Michael Embrich with the clipboard and game plan.

“We go to the house of every registered voter,” says ally Michael O’Connor.

Smith went to school on this block. The Benedictine nuns taught him in the school across the right from St. Henry Cathedral. His supporters receive the nod to put up a Smith sign and they go to it, nearly falling over one another in an effort to get the sign in place.

“Hey, don’t break the railing,” says the candidate, whose mother, newly retired as a nurse, and late father met when his dad worked the hospital beat as a cop.

They still have confidence, this campaign. They still have that big, roaring engine feel. It’s hard to dismiss Smith, a hearty, charismatic presence who jokingly boasts that his directional skills are poor because he spent his whole life in Bayonne, walking square blocks and having to remember little more than letters and numbers.

Although it’s a nonpartisan election, the power players in Hudson County back the Smith camp, and the infrastructure of the Doria years is in place around Smith. Men who worked for Doria or who supported him stand unflinchingly with Smith. The Democratic Party establishment loves the candidate they call the “kid” here because he’s the youngest man in a field of five that includes former Mayor Richard Rutkowski, Robert Sloan, Ray Rokicki and Conaghan.

Goodwill from the party also extends beyond Hudson County. Senate President Richard Codey (D-Essex) met with Smith last week, and the two men hit it off.

“What a decent guy,” says Smith. “You ever just get a good feeling about a guy?”

Back in the Conaghan camp, Wilbeck suggests the Hudson County Democratic Organization’s keen interest in a Smith candidacy has to do with their desire to protect their piece of the action in the redevelopment of the pier in Bayonne.

In any case, the Smith campaign isn’t exactly overanxious to publicly embrace the redevelopment proposal Doria signed off on before he left office.

“Plans made years ago may not be the most appropriate goals for today,” reads a Smith campaign flyer released on Monday. “Mayor Smith will ensure that the public is an active participant in the redevelopment process, and will work to foster development that increases tax ratable and produces good paying jobs for Bayonne residents.”

With the market in turmoil and Congress unable to get a deal, the candidate says he plans to sharpen his own understanding of the financial situation.

“Ths week I’m meeting with the CEOs and presidents of two banks in town, Bayonne Community Bank and Pamrapo Bank, both of which do a lot of mortgage work in town,” says Smith. “I want to get a feel from them about where we’re headed with all of this.”

He also sees a corollary between Wall Street and the home front.

“We’ve been living beyond our means,” Smith says of Bayonne government. “That’s what we’ve done here for far too long.”

Some of the men in his camp – teachers and firefighters and cops and longshoremen – complain that Chiappone’s a rabble rouser and Conaghan’s a naysayer. They liked the judge once. But Conaghan made money, worked for banks, became hardened to life here. Aloof. They fear him coming in with an uncaring attitude and heavy hand.

If Smith’s tied into the way it is now, or so say Conaghan’s people; Conaghan’s too far from government and the cadre of Bayonne diehards who’ve run the firehouses and gone on the police calls, or so argues the Smith camp.

So dedicated are both camps to reaching that middle ground of voters here – Independents and Republicans – that neither candidate will publicly support Democratic presidential candidate Sen. Barack Obama (D-Ill.).

“That’ not relevant to Bayonne right now,” Conaghan says of presidential politics, and Smith agrees.

To start with, Smith will have City Hall, the station and school houses and public power players and Conaghan will have the outcasts and outsiders, some fed-up private bigwigs and a jump on those Bayonne voters in the middle by virtue of his essential argument that he’s opposed the power for years.

The rest is an all-out turf fight. 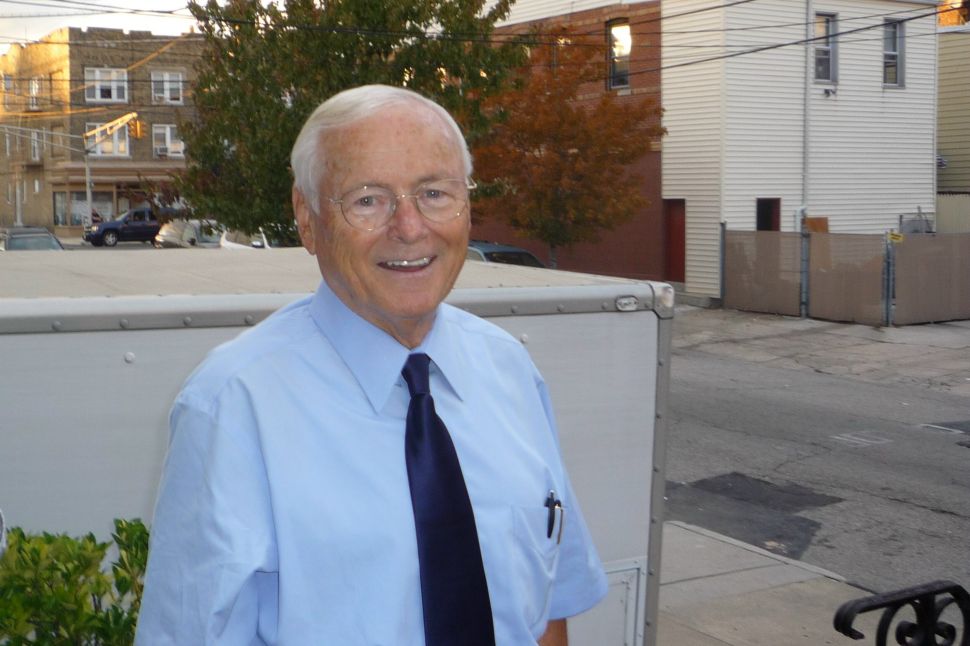