PASSAIC – The streets throb with Mariachi rhythms as the floats and red, white and green-draped cars move slowly through Passaic and the public men and women wave to the crowds that spill finally into the yard of Public School Number 11 in the 2nd Ward: a confluence of food, flags, bodies and music.

All pay homage to Mexican independence.

The lead singer dances on stage and sing about Mexico and women, and arms in the crowd sway to the horns and guitars and in the background in the middle of supporters wearing red shirts with his name printed on them stands a subdued man in a gray suit.

Councilman Jose "Joe" Garcia shakes hands with a lot of people who pass. They know him. He has nine children, and has served on the School Board for 12 years, and as councilman for the last seven years.

There is no wild abandon in Garcia at this party Sunday afternoon.

The veteran elected official’s in a fight to prove he’s legit against a shrinking local backdrop of public integrity, overcrowded by images of former Mayor Sammy Rivera behind bars, and fellow councilmen Jonathan Soto, Marcellus Jackson and Gerardo Fernandez floundering in the bribery scandal that took down Rivera.

Confronted outright with the jailed former mayor’s boast to FBI agents that he could get four votes, "easy, easy, easy," and the whispered rumor out there under today’s festive feeling that Rivera considered him to be one of those votes, Garcia says "no way."

"That’s what everyone’s saying, but I don’t know what gave him the right to say that he had four votes," says Garcia. "My votes are for the welfare of the city, not somebody’s ideas. I work for the city of Passaic. I’m an independent vote."

To the question of whether he had any conversations with Soto, Fernandez, Rivera or Jackson about insurance contracts in Passaic, Garcia shakes his head "no."

But on March 22, 2007, he voted "nay" with Soto, Fernandez, and Jackson on whether the city should renew its insurance contract with Risk Management Solutions.

Did he have prior conversations with those men or with Rivera about voting no, presumably to clear the way for the FBI plant posing as a dummy insurance contractor, which paid Rivera the $5,000 bribe?

After the feds arrested Fernandez two weeks ago on a perjury charge, Acting Mayor Gary Schaer immediately called for the councilman’s resignation.

"I believe he’s innocent, and he’s going to fight his case," he says. "If that’s the case – if he’s innocent – I don’t see any reason for him to step down. He’s the only one that can answer that question.

"We provide services to our nationals here," explains the office’s adjunct director, Ernesto Escamilla. "All our services are for free. Fifty percent of the Mexican immigrants to Passaic are from the City of Puebla. After Chicago, Passaic is the most important distribution point of Mexican products."

But again there’s a Garcia question, as Ray Carrera, who works at the Puebla office, does outreach for Garcia’s campaign. He’s also president of the United Mexican Chamber of Commerce, which Garcia says has endorsed him.

"He’s talking to people and letting them know that he supports me," Garcia says of Carrera.

He insists Carrera’s simultaneous involvement with the government of Puebla and the Garcia campaign creates no conflict.

"When we meet, we meet at 7 o’clock at night," Garcia says. "I don’t think he’s working at his office at that particular time. So I don’t think that’s a conflict of interest. That’s my opinion. …He is personally working for me, besides what he’s doing in his Puebla office."

Despite Garcia’s close ties to Carrera, a rival campaign ironically shares the same digs as the new Puebla headquarters. Near the front door, above the official posterboard declaring the immigrant outreach offices open, stands a campaign poster for Dr. Alex Blanco.

"A guy named Willy sublet this place to a staffing agency, and they sublet the front office space to Puebla," says Mallory Earle, Blanco’s campaign manager, who’s in a back room, directing troops for the Blanco campaign.

There’s coffee, and there are some campaign workers going over battle plans. The mood is all dog-soldier readiness here a few weeks prior to Election Day.

"We were here first," says Earle. "They just put that sign in the window not even a week ago. Now we co-exist in the same space."

Outside, the Mexican Independence Day Parade travels through the streets. Gov. Jon Corzine marches, and so does Schaer and the candidates, Garcia among them in the vast crowd.

"Everything I do, I do honestly," says Garcia. "I put this city of mine first. I never made a decision based on personal interest and I will continue to work in that manner. I put the people first before everyone else. That’s my goal, and I will die that way." 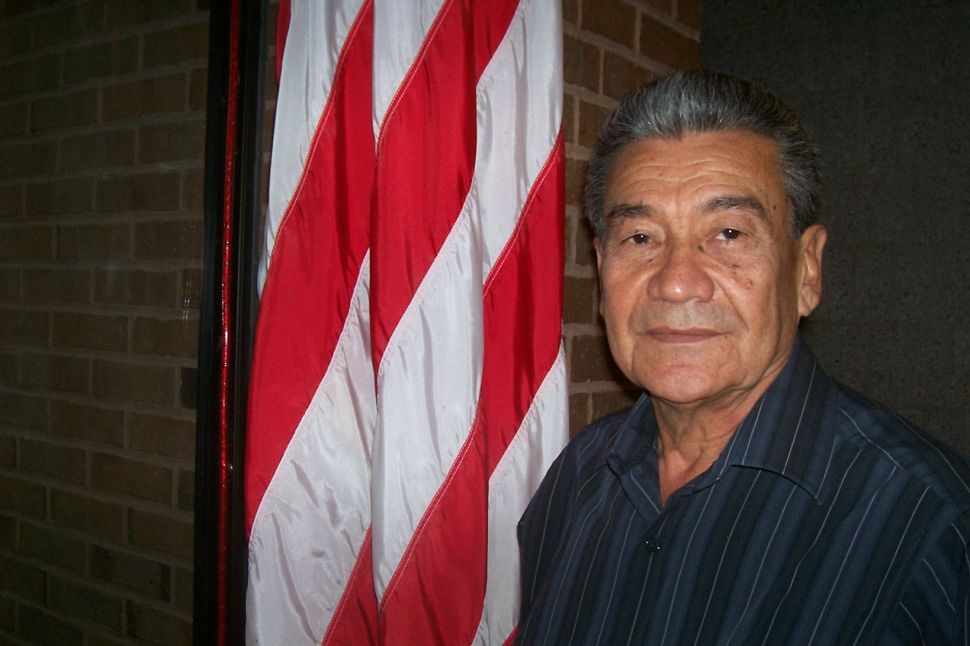