He was on the streets with that personal touch. People know him in Bayonne. And they like him. If success in American politics hinges on making an emotional connection with voters, Smith, runnning in his first political campaign, showed talent early and often.

He has personality and presence, not to mention a compelling story: that of a hero cop who diffused a potentially deadly situation in Bayonne 17 years ago. In an advertisement run by his campaign, an old black and white news clipping of the incident involving a rifle-toting Richard Barba is superimposed on fresh, color images of the dynamic mayoral candidate.

“A police officer faces down a gunman holding a young family hostage,” says the voice-over, referring to a standout moment in the long career of the 46-year old Smith, who has received over 40 commendations.

Alongside the erstwhile campaign of retired municipal judge Pat Conaghan – the old man, as they call him on the streets – the exuberant police director looked almost unstoppable.

But at an August 20 council meeting, the inevitability factor may have changed when a man went to the microphone during the public comment segment and announced that Smith had inflated the 17-year old hostage-taking incident for his own benefit.

The man at the microphone was Richard Barba.

“What the director forgot to tell you was that three months prior, I was the victim of a murder for hire. I was shot, and went to University Hospital DOA,” Barba told the packed council chamber. “They brought me back to life. Ok? He also forgot to tell you that over the course of the next three months my life was being threatened almost on a daily basis.”

The boyfriend of Barba’s ex-wife had put a hit out on Barba, he said. After his discharge from the hospital, he strapped on a bullet-proof vest, locked and loaded a gun, brought along some extra magazines, and went to his ex-wife’s house. He said he was armed because his would-be killers were out on bail and still after him.

Barba told his children to leave, but they wouldn’t, in Barba’s words, because they wanted to be with their father.

“There was no hostage situation there,” he told the crowd, reflecting on that day in 1991. “The director is a liar.”

Barba also alleged that Smith – who was not married at the time – was dating Barba’s ex-wife prior to delivering grand jury testimony against Barba.

“He knew there was no hostage situation,” Barba said. “As far as I’m concerned, he’s nothing but a liar.”

Nonetheless it was Smith in his capacity as a police officer who volunteered to go into Barba’s ex-wife’s house; and the department credited Smith with talking Barba down and ensuring no one was hurt. Barba was arrested on charges of kidnapping and making terrorist threats but didn’t go to prison after he turned states evidence against those who had put the hit out on him.

“During the full-scale hostage crisis, Bayonne Detective Mark Smith volunteered to go into the apartment to try to convince Barba to put down his weapons and free the children,” Smith campaign manager Jason O’Donnell reminded campaign supporters in a mass email. “Mark had known the Barba family for many years and he was willing to put his own life on the line that day by entering the apartment without any weapon. It was an amazing act of bravery.

“Barba demanded that Mark strip down to his waist and threatened him with the rifle,” O’Donnell added. “Mark seized a single moment when Barba was distracted and tackled him to the ground.”

Smith’s detractors insist Barba’s recollection isn’t as important as the fact that Smith and his people referred to an incident in their advertising that, in their view, insensitively touches people who still live in Bayonne.

Smith sat in the audience on the night of the August 20 council meeting, and so did Conaghan.

Barba said he had tried to contact the police director/mayoral candidate about the content of his campaign advertising, but Smith did not return his phone calls.

Incredulous, the Smith campaign immediately accused Conaghan’s minions of dragging Barba into the contest and putting him up to the public appearance at the microphone. They say the judge’s campaign will stop at nothing to win – even if it means secretly unleashing Barba to throw up a question mark about Smith’s record.

“This is just an attempt by the Conaghan camp to smear Mark,” said O’Donnell. “They acted like they were shocked and appalled, but right before the meeting, (Conaghan ally) Mike Masone told people a bombshell was about to land. They’re saying this guy went up there on his own freewill, but it was obvious Conaghan’s people were behind this.”

The judge denied anyone in his campaign enlisted Barba to make public statements against Smith.

“I wouldn’t condone what this guy did,” said Conaghan. “I feel sorry for him. I don’t want any part of that. One of Smith’s guys got in my face and started calling me all kinds of names. It’s an ugly situation. All I will say is this youtube situation is out of order, and whoever put Barba up on youtube is a dirtbag, as far as I’m concerned. I have no idea who put it up.”

Assemblyman/Councilman Anthony Chiappone insists he was among the stunned onlookers when Barba began talking about the incident of 17 years ago. An inner circle political ally of Conaghan’s, Chiappone denied any contact or foreknowledge of Barba’s appearance, and pinned the entire, awkward situation squarely on Smith and Smith’s campaign.

“Smith shouldn’t have made this into a campaign commercial,” said Chiappone. “Why would you exploit something that happened nearly 20 years ago, and use it for political gain? Did Smith think this guy wasn’t going to say something?

“The bottom line,” Chiappone added, “is they misrepresented a story to make him look like a hero cop. This is not Pat Conaghan’s fault. This is a Frankenstein of Mark Smith’s own creation. Nobody put this guy in an ad except for Mark Smith. No one forced that guy to go to the council meeting and make a statement except Mark Smith, by not returning his phone calls.”

Although they admit it’s an uncomfortable story to absorb in the middle of their campaign, Smith’s people are convinced the Barba situation will ultimately drain Conagahan, particulalry if they’re able to prove a pre-existing connection between Barba and anyone among the judge’s ranks.

On and off the record, it’s all about the back and forth between two campaigns.

There are other candidates in this race: former Mayor (and perennial losing candidate) Richard Rutkowski; City Clerk Robert Sloan; and city Zoning Commissioner Raymond Rokicki. How they impact the contest is negligible. Rutkowski may siphon some of the anti-Joe Doria (former mayor and Smith backer) sentiment that in part fuels Conaghan. Sloan may grab some votes among municipal employees that otherwise might have belonged to Smith.

But anyone who follows this race agrees the chief competitors are the judge and the police director – Conaghan and Smith; and even if the Barba story proves too difficult to untangle in the two months before Election Day, the rivalry between these top candidates for mayor, from one month to the next, just got more intense. 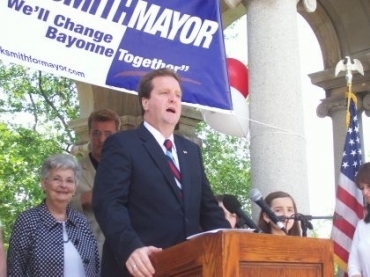