As it does for just about everything, the New York Times has a blog about songwriting. It’s called, somewhat pretentiously, Measure for Measure: How to Write a Song and Other Mysteries. It’s rarely updated, but it’s rarely bad. It features folks like Andrew Bird, Roseanne Cash, and Peter Holsapple (formerly of the Continental Drifters).

Suzanne Vega is also a semi-regular contributor. You’ll probably know her for her hits “Luka” and 1987’s near-ubiquitous “Tom’s Diner” (just hum that jaunty little melody and the ’80s will come rushing back to you in a white-hot flash), though she’s released a fairly steady stream of records since then, including last year’s Beauty & Crime.

You probably won’t know Ms.Vega as the “Mother of the MP3,” yet that’s precisely what she is. One of the many revelations contained in Vega’s latest post (among them that the real life “Tom’s Diner”—called Tom’s Restaurant on 112th and Broadway—is the same one featured in Seinfeld) is that the vocal track from the original a cappella version of “Tom’s Diner” was so admired for its simplicity and clarity that it became the test track used by German scientists to perfect the mp3. According to an article Ms.Vega stumbled upon in 2000 in the (now defunct) magazine Business 2.0, lead scientist Karl-Heinz Brandenburg (“who looks like a mad scientist”) heard the tune being played down the hall form his research lab and thought the natural warmth of Ms.Vega’s voice would be the perfect template around which to improve his mp3 algorithm. If Brandenburg could figure out a way to compress such a delicate track without diminishing its glow, he could work with anything.

Ms. Vega writes that Brandenburg’s initial experiments with her song produced “monstrous distortions, as though the Exorcist has somehow gotten into the system, shadowing every phrase.” But after making subtle improvements over the course of thousands and thousands of listens, his team created a digital device that could recreate a (seemingly) perfect copy of Ms.Vega’s playground melody. Now, according to Business 2.0, “when an mp3 player compresses music by anyone from Courtney Love to Kenny G, it is replicating the way that Brandenburg heard Suzanne Vega.” (More on Ms.Vega’s mp3 connection can be found in a recent BusinessWeek article.)

Of course, “Tom’s Diner” also spawned one of the first international remix explosions long before Radiohead turned the concept into a worldwide competition to sell singles, but that’s another story… 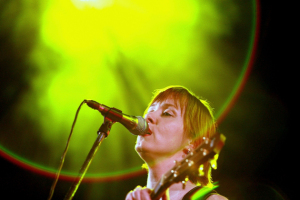