Passaic mayoral candidate Alex Blanco says he is not the high-ranking public official implicated in a new indictment of former Councilman Jonathan Soto.

Federal prosecutors added to Soto’s indictment yesterday, alleging the former councilman received cash payments from undercover agents posing as health insurance contractors. The government says Soto received money in exchange for exercising his official authority to secure business with the City of Passaic, including the Board of Education.

Blanco, who served as school board president during the time, insisted he never played any role in the case.

"I absolutely deny any involvement in that, and I unequivocally deny that Mr. Soto solicited any payments on my behalf," said Blanco, who called Wednesday’s news regarding Soto "shocking."

"They wanted a clean face and since I didn’t know how things worked, they could pull things behind my back," said Blanco, 36, a podiatrist who served as president from April 2006 until April 2007.

"I always followed the superintendent’s recommendation," he added.

On the campaign trail, Blanco continues to face criticism from his onetime supporter Sandoval, who says the School Board member didn’t fight hard enough when he was in a position of power on the Board.

After Blanco’s year in charge of the governing body, Capuana returned as School Board president in April 2007.

The superseding Soto indictment comes in a week when the federal grand jury may further shake up the mayor’s race here.

Ellen is scheduled today to answer a subpoena questioning him about

statements he made to the Herald News about someone offering him a $25,000 bribe to get out of the mayor’s race. To date, the mayoral candidate has refused to name the individual.

Soto’s news came in the interim.

The U.S. Attorney’s Office charges that on or about Nov. 4, 2006, Soto met with the undercover agents in a Forked River rest stop off the Garden State Parkway.

Soto wanted to nail down specifics about how much cash he and a person named in this week’s indictment as a "high-ranking Passaic official" would get if they could drum up votes on behalf of the dummy insurance brokerage firm.

The phony firm run by the undercover federal agents sought a citywide insurance contract. The deal was Soto and the high ranking official would get $25,000 if they could deliver the School Board, and $25,000 for the City Council, according to the indictment.

Toward that end, Soto received a payment of $5,000 on that occasion in Forked River, and an additional $5,000, both of which he said he "put in the hand" of Passaic’s high ranking official.

"It was not me," said Blanco, and even his most bitter political enemies in this hard-charging election cycle concede it would be hard to picture Blanco implicated in the corruption scheme.

"I would further bet the farm it’s not Vinny," said Capuana spokesman Alex Ybarra, himself a member of the School Board.

No surprises there – in either case.

That’s because last year’s indictment of former Mayor Sammy Rivera, busted for taking a $5,000 bribe from the brokerage firm, point to Rivera as the official unnamed in this week’s superseding indictment of Soto.

According to Passaic sources, every contract and appointment ran through Rivera, who’s now in a federal penitentiary after pleading guilty to corruption charges in connection with Operation Broken Boards, which leveled ten other elected officials statewide, including Soto.

In his own run for mayor, Garcia continues to deny that he was the last of the former mayor’s four "easy" votes on the Council.

The superseding indictment returned today adds to Soto’s initial 15-count indictment eight counts of bribery and attempted extortion. He is scheduled for arraignment at 11:30 a.m. on Oct. 22 in the courtroom of U.S. District Judge Anne E. Thompson.

The federal grand jury that convened this week will presumably be in action again today, as Ellen faces his own questions about a bribe he alleged, in what Blanco said will be Ellen’s "moment of truth."

But for Sandoval, Blanco had his own moment to fight corruption when he was School Board President, and did not fight forcefully enough, in Sandoval’s view.

"I know Alex is going to argue that he’s different from the others – from Sammy and Vinny Capuana and the older guys who have been there a long time," the real estate developer told PolitickerNJ.com earlier this week. "But he had an opportunity. He’s been in public office, and our schools are still in terrible condition, ranked among the lowest in the state. His first term, I gave him the benefit of the doubt. He was learning. But the second term – he hasn’t done anything."

"I’m one man on the board, and Jose has never been elected to anything so, of course, he doesn’t understand that you need a majority on the School Board," Blanco said. "I’m not a demagogue. I’m going to make my case and vote my conscience and be good with God, but I’m not going to run out into the streets and stir angry feelings."

Blanco allies argue that Rivera worked to re-install Capuana as School Board President when he didn’t get the results he wanted from Blanco, and Blanco points out that he won re-election to the School Board with fewer than ten votes because Rivera tried to sabotage him. 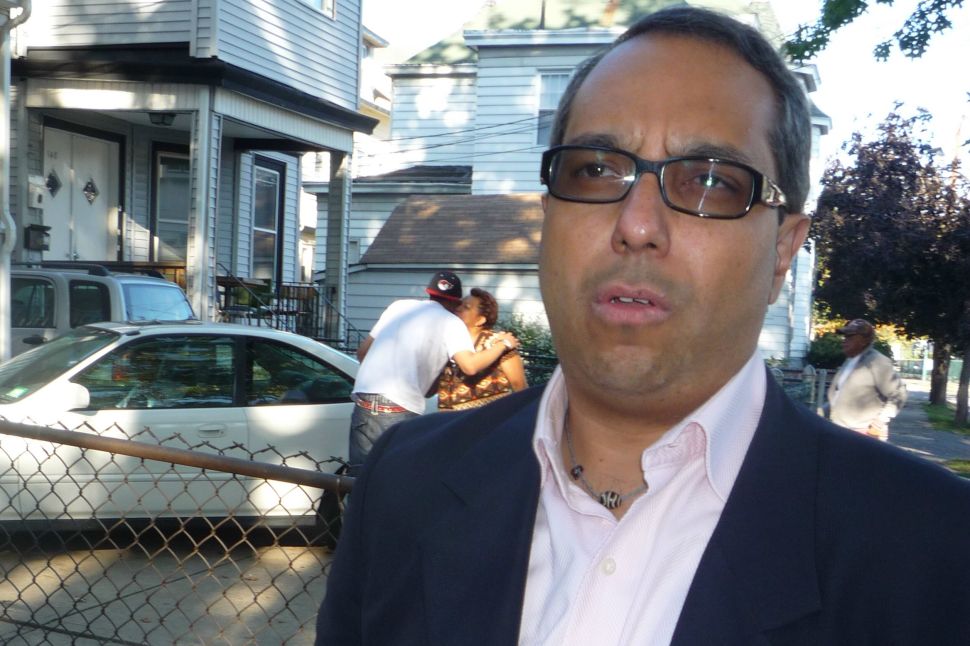