MARLBORO – Mayor Jon Hornik and his Republican guests from the 12th Legislative District look like old pals at this charity ball the mayor throws on a Saturday night, as revelers groove on the dance floor at the Battleground Country Club.

The cover band strains of “You’re just too good to be true” sweep through the ballroom and the mayor floats happily among guests, including state Sen. Jennifer Beck (R-Monmouth), Assemblyman Declan O’Scanlon (R-Little Silver) and Assemblywoman Caroline Casagrande (R-Colts Neck).

Although Hornik insists that all he wants now is to be a solid mayor of his hometown, the Democrats like him early. They see higher office promise in this legal counsel for a venture capital development firm and family man with deep roots in Marlboro, the biggest town in the 12th Legislative District.

In the crowd, Hornik grabs the hand of U.S. Rep. Rush Holt (D-Princeton). They briefly bond.

The day after his packed ball – which, incidentally, raises $35,000 for defibrillators to be situated in public sites around town – he will interface with Newark Mayor Cory Booker and other party leaders in a North-Central Jersey meeting of political minds.

“He’s the closest thing the Democrats have to a star in Monmouth County,” says Pat Politano, who worked for Hornik a year ago when Hornik, son of late former Marlboro Mayor Saul Hornik, challenged and defeated incumbent Mayor Robert Kleinberg.

In that same election cycle, Republican Beck unseated cash juggernaut Ellen Karcher to become the state senator in the district, while pulling running mates Casagrande and O’Scanlon in with her to serve in the Assembly.

The thought that Hornik might be gearing up to face her in 2011 – or one of her running mates sooner than that, as in next year – doesn’t faze Beck.

Like the mayor, Beck also won’t discuss future plans. She may not even be in the 12th District next time.

If state Sen. Joseph Kyrillos (R-Monmouth) retires and lawmakers include Beck’s hometown of Red Bank in Kyrillos’ neighboring 13th District as part of legislative redistricting, Hornik would likely face O’Scanlon. That is, of course, if both men chose to run for Beck’s vacated seat.

In any event, the veteran Kyrillos says he’s not going anywhere.

Of course, Beck is also a much talked about candidate for lieutenant governor, to run on a ticket next year with U.S. Attorney Chris Christie. If she goes in that direction, and the GOP ticket beats incumbent Gov. Jon Corzine and his lieutenant governor running mate, such an outcome would likewise derail a Beck-Hornik collision course.

“I think Jennifer Beck would be an excellent candidate for lieutenant governor,” says state Sen. Kevin O’Toole (R-Essex), a key Republican dealmaker who serves as leader of the Republican County party chairmen.

Once the Democrats' emergentleading manhere with solid fundraising ties, he might not be done, and if he makes a move, Hornik might have to go through Panter before getting to the Republicans.

She says she’s trying to be the best senator she can be, the same way Hornik says he likes being mayor.

And, meanwhile, their respective parties keep Beck and Hornik close. 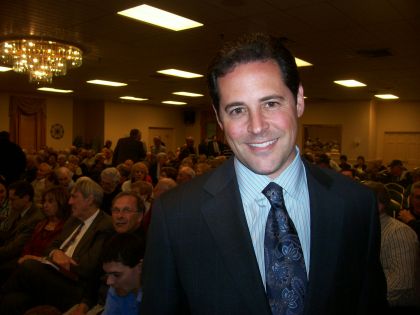