PASSAIC -With his career at the state level apparently in ascendency, ahandful of Trenton allies didn’t think Assemblyman Gary Schaer(D-Passaic),the new chairman of theFinancial Institutions and Insurance Committee,should get in the middle of this ground-level, five-man mayor’s contest.

Other factors are already at work, none of them good, including a jailed former mayor, two busted former councilmen who are still visiblein city politics, a third councilman defiantly digging in on the governing body against federal corruption charges, and an impaneled grand jury, which each day threatens to intrude on the campaign process by toppling yet another public official.

Moreover, some of the candidates competing – seemingly nice guys – in any event seemed too close to the man everyone still refers to around here as "Sammy," as in Sammy Rivera, the former mayor who had a good run for about five years before corruption caught up with him in his second term and the feds bagged him on bribery charges.

A fed-up Schaer had walked away from him two years ago.

Whoever wins the special election on Nov. 4th will have just enough time to get a better read from the inside on the wreckage left by Sammy, before he has to run for mayor again in May municipal elections to secure a full term.

Just enough time to take some blame and give his rivals a chance to regroup, or so the argument goes.

Then there’s that matter of Schaer being up for re-election next year in the 36th Legislative District, not a safe bet, particularly since the bulk of the district sits in Bergen County, where federal authorities continue to lay siege to the Democratic Party organization.

The last thing Schaer needs is a draining hometownpunchathon leading into next year’s fight.

Yet despite the "don’t do it" advice of his colleagues – Schaer today endorsed former School Board President Alex Blanco for mayor, and Kenneth Lucianin for City Council in what at least one of the other campaigns reluctantly describes as a dramatic landscape shift.

A Dominican immigrant who grew up in Passaic, the 36-year old Blanco is a local physician, family man, and relative newcomer serving his second term on the School Board.

"Alex Blanco is the first member of his family to graduate high school not to mention college," Schaer told PolitickerNJ.com. "He brings a new and refreshing analysis of where Passaic needs to be in the future. I believe Alex has a great understanding of where we've been but where we can go."

Son of a retired city cop and retired business administrator, and member of a big Passaic family with deep ties in the Democratic Party, Lucianin, 47, is running to fill a council seat vacated by disgraced Councilman Marcellus Jackson, who went down in the same federal sting last year that nailed Rivera.

Both men enthusiastically welcomed the backing of the Acting Mayor, whose strong ties in Passaic’s politically engaged Orthodox Jewish community mean they can count on about 1,800 votes come Election Day, in addition to what they’re able to muster on their own.

"It means a lot to me," said Blanco. "Gary's a gentleman, a public servant who always keeps his community at hand Passaic's number one for him. To me, his endorsement means morals, ethics and principles."

"I go back with Gary to 1992, and I have deep respect for his honesty," said Lucianin. "I asked him for his endorsement early on, and I am privileged to have it, particularly given how fast he's risen in the ranks of the Democratic Party.

"It will be a difficult election, but if we can get elected we will work to help this city recover from the embarrassment," he added.

The camp of city super Vincent Capuana responded grimly to the news that Schaer backs Blanco for mayor.

"It means a totally different dynamic in the race," said Alex Ybarra, spokesman for the 72-year old Capuana, School Board president and a known brand in Passaic.

Sicilian immigrant Capuana probably runs at the head of the pack by virtue of his multiple campaign victories going back nearly 25 years, and more importantly because three Latino candidates cancel one another out in a quest for a total 18,401 votes in Passaic, in which roughly 52 percent of the voting electorate is Latino.

While Blanco and Sandoval both argue that they consistently reach out to voters of all ethnic groups in Passaic, the fact that they’re the only Dominican Americans in the contest naturally pits them against each other in a fight for around 900 base votes.

Ybarra said Schaer’s endorsement vaults Blanco out of his tug-of-war with Sandoval and over the shoulders of City Councilman Joe Garcia, who probably controls a solid 2,000 base Puerto Rican votes.

But Sandoval said he wants to build support block-by-block in all neighborhoods, and absorbed the news about Schaer-Blanco today with shrugged shoulders.

"Gary Schaer’s endorsement of Dr. Blanco comes as no surprise," Sandoval said. "Schaer has great interest in self-interest. It has been said that Dr. Blanco is Gary Schaer’s hand-picked candidate for the status quo. The endorsement tries to ensure the ‘no change’ policy in the city.

"Blanco was also picked by Rivera and Schaer for the Board of Ed, where he failed the residents of Passaic," Sandoval added. "This is just more of the same."

Others say the Schaer factor is unavoidable.

Although he eagerly stood with Schaer, Lucianin brooded before allowing his name to get bracketed with Blanco, in part because his father, who once served as School Board President, backs his old pal, Capuana.

The elder Lucianin, who’s lived in Passaic for 75 years, said a Schaer endorsement can make or break an election here.

"If I’m going to go by past performance, the Jewish community likes what Gary Schaer does and that’s going to give him (Blanco) an excellent base," said the candidate’s father.

Passaic sources say Orthodox Jewish voters in the city’s3rd Ward will start linging up to vote early on the morning of Election Day.

Behind the oral argument, Schaer said he would do everything in his power to get his candidates elected – stopping just short of a specific conversation about money.

But he went out of his way to put it on the line for Blanco.

During his five months as the city’s acting chief executive, Schaer’s regularly acknowledged that for all of its pressures, he loves the job. He even flirted with the idea of running himself beforethis falllanding the chairmanship of the Financial Institutions and Insurance Committee.

Committed to his state duties and comfortable as Council President, he said he doesn’t intend to run for mayor in May. To prove the point he said that barring a Blanco meltdown in office, he’s prepared now to endorse the doctor for the full four-year term should Blanco win the special election in three weeks.

"I can make that statement," said Schaer.

Posed the same question about endorsing Blanco now for the full-term election in May, Lucianin diplomatically avoided the question.

"What’s important is that we start healing the division in the community," said the council candidate. "What we’re doing here is we’re saying it’s okay for a Latino to support a Caucasian and vice versa. If we get elected, we’re going to move in that direction to heal the community. As for the candidates, I wish everyone luck."

Schaer said repeatedly today that he would be honored to sit beside Lucianin on the Council and honored to have Blanco in the mayor’s office, but he acknowledged that the contest would be no walkover. 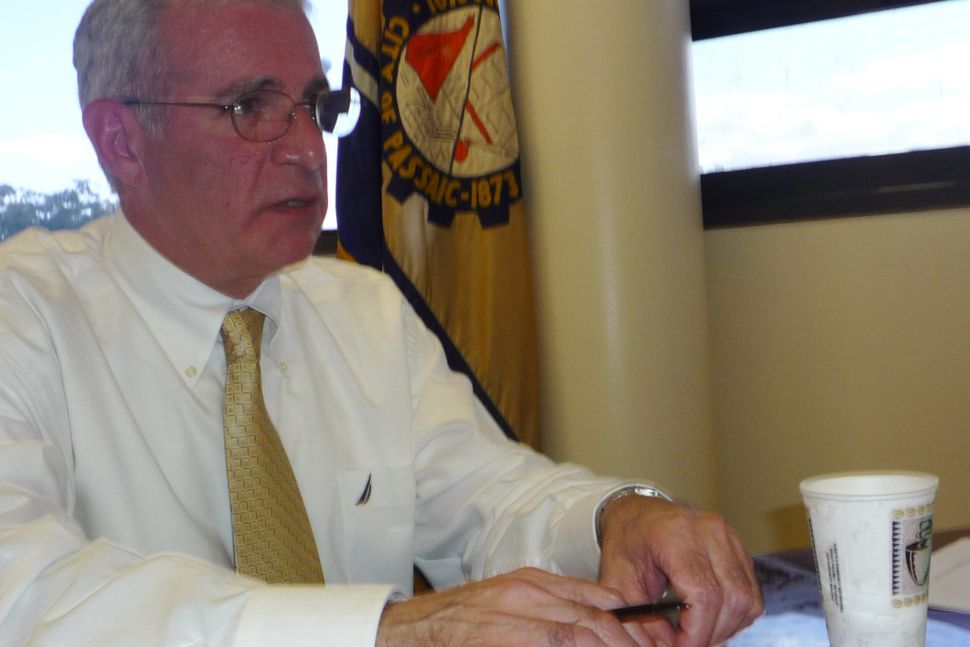