FLEMINGTON – The Stender supporters started lining up on the sidewalk in front of the old Hunterdon County Courthouse moments before state Sen. Leonard Lance (R-Hunterdon) arrived with a contingent of women for Lance, including state Sen. Diane Allen (R-Burlington), and his wife.

Some bitter back and forth ensued between the Stender and Lance women on the state senator’s home turf of this 7th Congressional District, where Assemblywoman Linda Stender (D-Fanwood) and Lance are in a toss-up battle to succeed retiring U.S. Rep. Mike Ferguson (R-New Providence).

For a few minutes it looked as though the women here thought they could settle things on their own, in Flemington’s version of “Street Fight.”

“You put those signs up, I’ll tear ‘em down,” a Lance supporter told the Stender crowd.

“That would be against the law,” answered a Stender backer. “Is the message ‘Criminals support Leonard Lance?’”

It was getting rougher – in an already rough environment.

In 24-7 cable ads, the Democratic Congressional Campaign Committee (DCCC) charges that Lance is an “extremist” on the issue of women’s reproductive rights, and now, in the same vein of that continuous barrage, people supporting the veteran state legislator were potentially “criminals.”

“Women need Stender” read a sign hoisted aloft by one of the Democrat’s diehards.

Surrounded by women and hitting back at the charge on Tuesday afternoon, Lance said, “I am extreme in the love I have for my wife and my dog.”

Allen and other women went to the podium to help clarify the record.

“This portrayal by his opponent of Leonard Lance as an extremist is a lie,” said Allen. “He is a fiscal conservative and a social moderate.”

Lance two years ago voted against a bill sponsored by Stender that bars pharmacists from refusing to fill birth control prescriptions based on their religious or personal beliefs.

While Allen admitted that she personally voted in favor of the senate version of Stender’s bill, she said Lance is pro choice and has supported women on numerous issues, including authoring a law providing funding for domestic violence shelters, and strengthening rape shield laws.

Lance also went on record in support of improved access for women to contraceptives by requiring employers to cover FDA-approved contraceptives.

The extremist charge is out there in tandem with another Stender knock on Lance: the fact that he’s a member of the same party as President George W. Bush.

The Democrat’s ads continuously link the senator to the unpopular lame-duck, who boosted Lance’s campaign coffers with a private fundraiser last month.

Asked to name three issues on which he differs from Bush, Lance said, “I favor a balanced budget and I am deeply concerned about the federal debt, I am strong on environmental protection, and I’m pro choice.”

At odds with the establishment Republicans in her home county, Allen said she was happy to drive the hour and a half to stand with Lance against the Stender/DCCC attack machine.

She said she’s working hard for the McCain/Palin ticket and for local candidates. As for publicly backing the machine-endorsed Medford Mayor Chris Myers in his fight with state Sen. John Adler (D-Camden) – or taking a shot at Myers – Allen demurred on both counts.

As the crowd dispersed, Lance went down the steps of the old courthouse and started shaking the hands of Stender’s supporters. 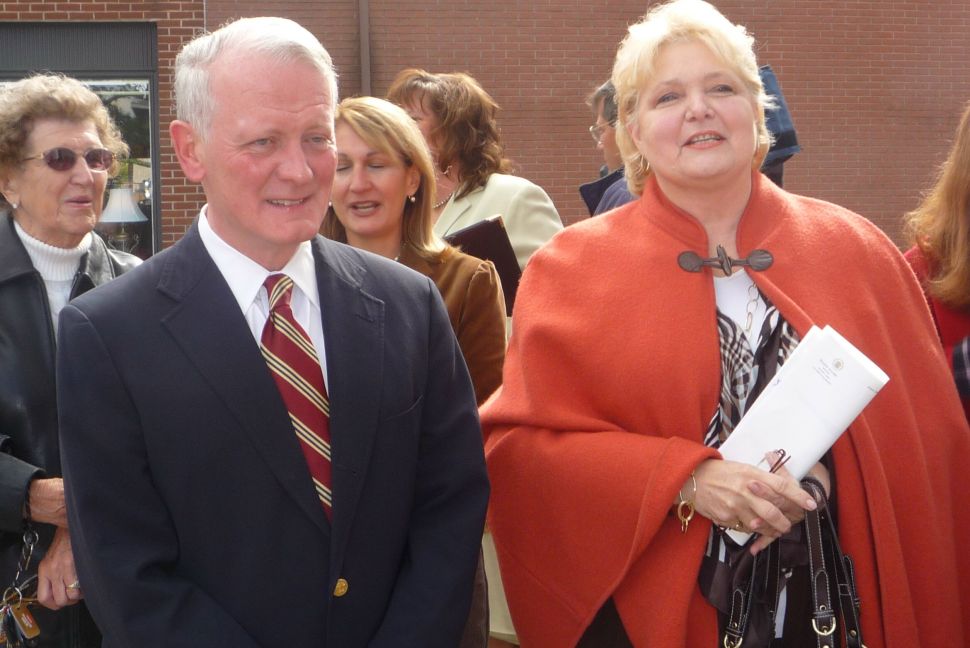