BAYONNE – Forget about president, there’s a war for mayor going on, and millions of contract dollars at stake as this hard knock dock town faces redevelopment of the Navy peninsula.

But the mayor’s race and its implications for next year’s politics have now produced a smaller – but no less intense – spin-off war between regular and renegade Democrats scrambling to prove their allegiance to Sen. Barack Obama (D-Il.) with a little more than two weeks until Election Day.

Leading mayoral candidates, police director Mark Smith and retired judge Pat Conaghan, don’t want to publicly back Obama as they court 7,453 independent voters and 2,157 Republicans in what is billed as a nonpartisan election in an overwhelmingly Democratic (15,894 registered voters) yet historically white city.

The Republicans see opportunity here in this onetime Reagan Democrat stronghold, and have made targeted phone calls on behalf of Sen. John McCain (R-Ariz.). But Obama’s 13-point lead over McCain in New Jersey and the Democrat’s frontrunner status nationally have at least one conspicuous Conaghan ally rushing to quell the perception that he’s operating outside the auspices of Obamaland.

On Saturday, Assemblyman Anthony Chiappone (D-Bayonne) enlisted the help of his ally, state Sen. Sandra Cunningham (D-Hudson), and opened an Obama for President headquarters at the corner of Avenue C and Andrews Street.

From that vantage point, he launched an attack on what he sees as a stalled-in-the-past local party organization he said has soft-pedaled its Obama outreach.

"The party hasn’t done anything to promote the presidential candidate, so we’re taking matters into our own hands," explained Chiappone, standing in front of an old cab company plastered over with Obama signs.

The assemblyman said the local organization fails to broadcast a meaningful endorsement of the Democratic Presidential nominee because they know a hearty, enthusiastic embrace of Obama could weaken establishment candidate Smith in Bayonne.

"African Americans have loyally supported Democratic candidates for years," agreed Robert Maes, who works the political arm of Chiappone’s operations. "Now the party has an African American candidate and the party refuses to support him. It’s a disgrace."

"They have no literature, no buttons, no signs," complained Chiappone. "You go by the party’s official headquarters and you see a big sign of Mark Smith in the window. Here’s an organization that’s given Mark Smith’s campaign thousands of dollars and Mark says he doesn’t know who he’s voting for."

Conaghan won’t say either – but Conaghan’s not running with the backing of the party machine.

The independent Democratic mayoral candidate showed up at Chiappone and Cunningham’s Obama opener yesterday and admitted that more and more "Obama’s looking like the man," but again underscored that the mayor’s race is nonpartisan.

A vigorous backer of Conaghan, Chiappone, however, must keep an eye on his own potentially tenuous re-election bid in the 31st Legislative District, where Bayonne composes one third of a District dominated by African American wards F and A in Jersey City.

He dismissed the suggestion that the instant Obama office is his way of covering himself with Democratic Primary voters in 2009, and kept his focus on the local party organization, which he said dumped Obama as soon as the presidential candidate failed to deliver any campaign money to Bayonne.

To hear the party’s local chairman, Jason O’Donnell, tell it, the organization just wants to dump Chiappone, not Obama.

The cowboy councilman turned double-dipping Assemblyman counts O’Donnell as one of his political enemies in part going back to a fight they had over control of the county committee, which Chiappone lost.

To Chiappone’s charge that O’Donnell is a hypocrite for endorsing a mayoral candidate in a nonpartisan race while backing away from Obama by using the nonpartisan label as cover, the party chairman fumed.

"We endorsed Smith, yes we did, and I stand by it," said O’Donnell. "I know it’s nonpartisan, but for us to take a pass on the mayor’s race, we might as well not be a party.

"Tony’s not a real Democrat," O’Donnell added. "He’s an opportunist. He’s not done a thing for Obama, and now two weeks before the election he’s trying to look like he’s doing something. This is classic Tony Chiappone. It’s pathetic, it really is. What he’s saying is a blatant lie.

"I’m for Obama, our office is for Obama," he said. "We’ve had volunteers in here phone-banking and holding events for Obama – over 30 events."

Party headquarters on Broadway is partitioned between the mayor and freeholders races on one side, and the presidential contest on the other. A small Obama for President sign is visible on the door, dwarfed by two big window signs: one for Smith and one for Freeholder Doreen DiDomenico.

But a small sign doesn’t necessarily mean a lethargic effort – at least according to a steamed up Karin R. White Morgen on Saturday.

When she heard the news about Chiappone’s Obama office opening and the assemblyman’s accompanying war cry that the organization Democrats have done nothing to promote the presidential candidate, Morgen rose from her chair in the party office, jumped in her minivan and drove down Broadway to Conaghan’s campaign headquarters.

"I gave them an earful," said the Bayonne native and Obama diehard, who supported the Illinoisan in the primary, pre-Iowa, when the regular Democrats backed Sen. Hillary Clinton (D-N.Y.).

" I was on board with Obama, my hero, in January, in the lead up to the New Jersey primary, and we were running a war-room out of someone’s house. We raised $2,000 for the national campaign," said Morgen, a divorce attorney, who all along has tag-teamed the Bayonne for Obama effort with Mary Marshall.

The two Bayonne women drove to the Democratic National Convention in Denver, where they managed to pry tickets to the big speech at Invesco field from State Party Chairman Joseph Cryan.

O’Donnell said it’s no secret that the Obama campaign isn’t spending money in New Jersey. "They’re not giving us resources, everyone knows that," he said. "We have signs that we purchased. Our printer had Obama signs made up."

Morgen confirmed that it hasn’t been easy. She said Marshall bought campaign buttons in New York for $1 each and sold them locally for $2.

"They don’t want to spend any money in Bayonne," Morgen said of the national campaign. "Jason called national for us and attempted to intervene, but it was no good. They just don’t see Bayonne as a battlefield."

Bayonne not a battlefield.

In any case, that’s one party that doesn’t see it that way – miles from Avenue C and Broadway. 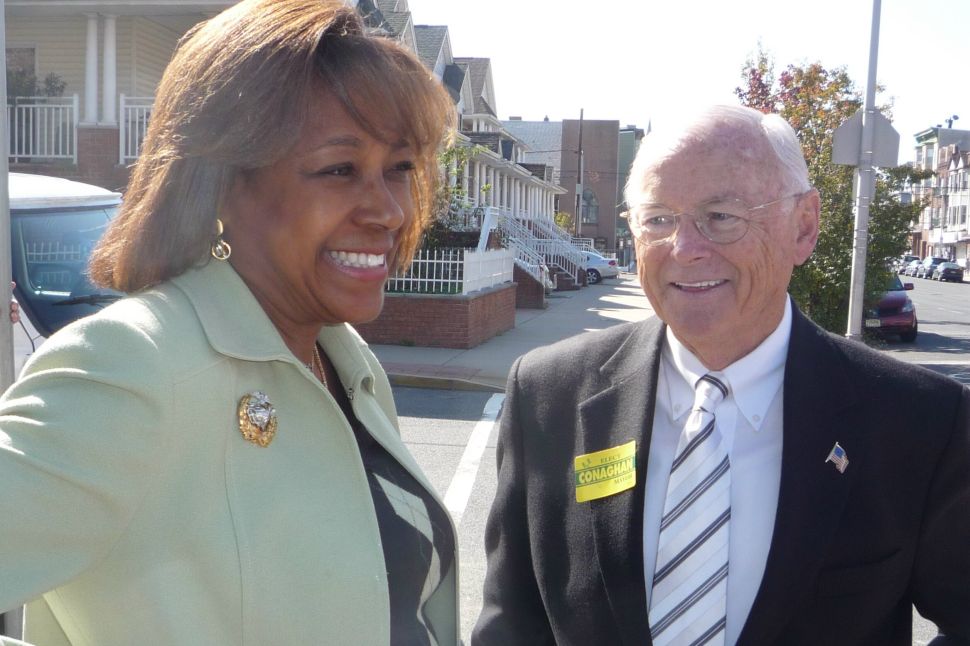