Caruso is a graduate of Bucknell University and Rutgers Camden Law School who, while working for Andrews, was credited with building a national coalition to successfully stop the dumping of VX Nerve Agent residue in the Delaware River. He and his wife Amanda, who served as Andrews’ general counsel, have two young sons. 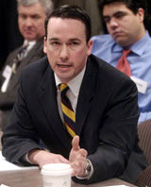