A story by the Gloucester County Times' Trish Graber must have been a real sphincter squeezing moment for more than a few politically active lawyers: "The conviction of former Sen. Wayne Bryant rang the alarm on public-sector attorneys who sent subordinates to perform their work, a practice the defense argued was common throughout New Jersey." Especially since outgoing U.S. Attorney Christopher Christie says that the Bryant trial "has woken up the pension board…. I think the pension board is going to be much more active in looking at these pension applications .. If you did it in a serial way like Wayne Bryant did, you should go to the pension board now and make good."

Graber suggests that among the first pension cases to be reviewed will be those of former State Sen. Raymond Zane and Gloucester County Democratic Chairman Michael Angelini, who "were key to the defense's argument that the practice of Bryant sending associates to perform his work at the Gloucester County Board of Social Services, and taking the pension credits, was common." Zane, who served in the Senate from 1973 until his defeat in 2001, collects a pension based on nine part-time public jobs.

If you want to learn more about Zane, read Joseph Smith's 2003 story in the Asbury Park Press — written while the public was paying attention to then Senate Co-President John Bennett's ethical woes. 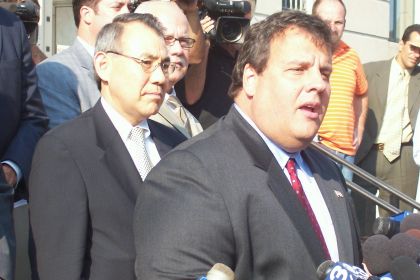