Governor Jon Corzine might help himself get re-elected by taking on state employees with a call to give back a 3.5% raise next year and possibly face substantial layoffs, but one place his proposal probably won't be well received is in the 14th legislative district, where a huge number of public sector employees reside. That could be bad news for incumbents Linda Greenstein and Wayne DeAngelo, if state employees head to the polls next year angry with the top of the ticket. The Mercer/Middlesex district is one of the most politically competitive in the state, and Greenstein and DeAngelo risk losing their State Assembly seats if their party is viewed as anti-state worker.

Another problem for Greenstein and D'Angelo: will voters hold Democrats accountable for the loss of $25 billion in state pension funds? Bill Baroni, the Republican State Senator from the 14th district, attended a public hearing of the State Investment Council today and called for the appointment of a bi-partisan legislative committee to review the pension fund, which lost $9 billion just last month. But Greenstein and DeAngelo issued no public statements today regarding the pension fund, or Corzine's proposals. 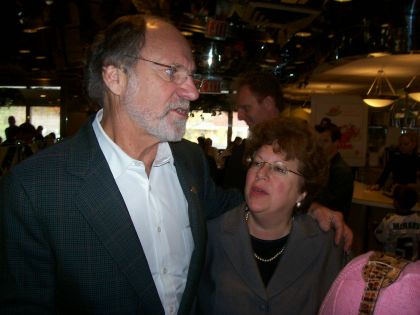