The NJ Voices interview with John Farmer, the new Editorial Page editor of the Star-Ledger, is a must-read for the New Jersey political community. Farmer says he’s an Independent (a political “agnostic”) who voted for George W. Bush in 2000 “because I don't believe in giving any one party more than eight years in office.”

On the Star-Ledger’s political leanings:

“The editorials over the past eight years have been largely liberal. But that's as much a function of events as it is of any internal inclination of the paper. Largely, it's been a reaction to the record of the Bush administration. He hasn't given us much to cheer. We supported him quite enthusiastically after 9/11. But as the record of the Bush administration has unfolded, we've been pretty critical.”

On newspapers competing with the Internet:

"Well, I hope they're very wrong. I think a very strong case can be made for newspapers and the public need of them. The problem with information on the internet is that it is unvetted, unedited, it's raw data in half the cases. As it was described by one executive, it can be "a cesspool." The difference is, what appears in newspapers, in both the news and editorial sections, has been researched, carefully edited, usually through more than one hand. It's dicey proposition and with all of that we still make mistakes. But we're a hell of a lot better than the internet."

Farmer replaces Fran Dauth, who accepted the Star-Ledger's buyout offer. A reporter with the Star-Ledger since 1982, Farmer started as a Jersey Journal reporter andworked for the Newark News and the Philadelphia Bulletin. His son, John Farmer, Jr., served as state Attorney General under Govs. Christine Todd Whitman and Donald DiFrancesco, and was the Governor of New Jersey for ninety minutes in 2002, between DiFrancesco and Richard Codey. 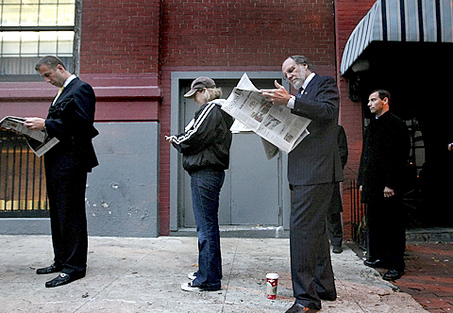