It is still not clear exactly how many candidates are running to succeed state Sen. Leonard Lance, but battle lines are already being drawn on two fronts: geography and ideology.

Assemblyman Mike Doherty (R-Washington Township), 45, is going to campaign on the latter. He’s from Warren County, which initially puts him at a slight disadvantage in a county committee race, since it has about 40 fewer members than Hunterdon County, home of his opponent, Assemblywoman Marcia Karrow (R-Flemington). But he’s one of the most conservative members of the legislature, and plans to use that to siphon off Hunterdon’s most staunchly conservative county committee men and women.

“I see it as a real bellwether of what type of Republican leadership we’re going to have,” said Doherty, who’s a patent lawyer by trade. “If you ask people across the state who are among the most conservative Republican legislators, I would be among the first or second people named. That’s going to enure to my benefit.”

Doherty is about as close to an ideological purist as you can get in the New Jersey legislature, proudly proclaiming both his fiscal and social conservatism. He highlights the fact that he was the Assembly sponsor of the “Lance Amendment” ballot question, which bans state borrowing without voter approval, and wants a state constitutional amendment banning gay marriage.

Doherty railed against the science of global warming on the assembly floor, and in August called on Gov. Corzine to repeal the Global Warming Response Act. He’s also firmly pro-life – so much so that New Jersey Right to Life jumped in and endorsed him before any other candidate in the district declared.

He was also the only New Jersey legislator to endorse U.S. Rep. Ron Paul (R-Tex.) for president.

“There are a couple serious differences between Marsha Karrow and I,” said Doherty. “One is that I’m pro-life…. She has clearly stated that she is not.”

Doherty said that Karrow also opposed his bill that seeks to extend the Lance amendment to banning borrowing without voter approval on a municipal and county level.

In a press release this morning announcing her candidacy, she stayed clear of social issues, instead highlighting her fiscal conservativism.

“I am a tireless advocate of small town, rural New Jersey, and during my tenure on the Assembly Budget Committee, never stopped attacking the Majority in Trenton for failing to address the corruption, fraud and abuse running rampant in this state which, I believe, is a huge contributing factor to New Jersey's highest property taxes in the nation,” she wrote.

Hunterdon County Freeholder Matt Holt is lower profile than Doherty and Karrow, but is also considering a bid. He said that his fiscal and social stances are in line with Lance and his predecessor, former state Sen. Bill Schluter.

“I believe much in the Lance/Schluter model which are probably two individuals who could not have represented our district any better,” he said. “They are certainly very fiscally conservative, proven time and time, but they are certainly more on the moderate scale with respect to social issues, and I think overall you’ll find that’s where the public is.”

Karrow has not yet said whether she will run in the June primary if she does not win the county committee race. Doherty, for his part, has stated several times that he will.

“I won a primary against Karrow in 2001 by 2,300 votes. In 2005 I won by over 4,000 votes. It’s time for Republicans in New Jersey that are both fiscally and socially conservative to wake up and get involved,” he said. 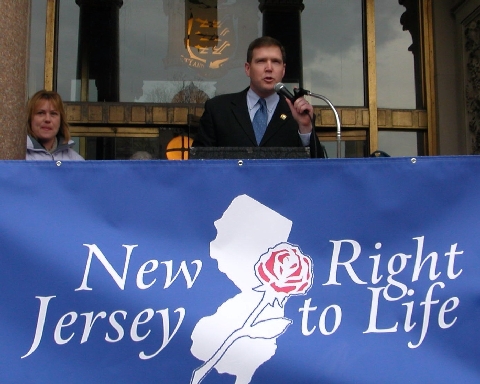