Today, as Governor Jon Corzine addressed the New Jersey League of Municipalities convention in Atlantic City and proposed allowing local and county governments to defer 50% of next April's required pension payments, there was word from the New Jersey State Investment Council that the pension fund has lost $25 billion since July, including $9 billion in October. When he gets back to Trenton, he'll have to decide whether to hold his close friend, Orin Kramer, accountable for the massive losses.

Kramer, a 63-year-old hedge fund millionaire and according to U.S. News and World Report, the #3 bundler for Barack Obama's presidential campaign, originally came up with the idea of Corzine running for an open U.S. Senate seat in 1999. It won't be easy for Corzine to fire him. And while Kramer isn't the only financial whiz to mess up during difficult economic times, Corzine's biggest problem is how easy it will be for Republicans to come up with a 30-second TV ad holding the former Wall Streeter accountable for massive losses in a fund that provides benefits for more than 700,000 current and future retirees.

Also on the hot seat in line for termination: William Clark, the director of the state Division of Investment.

This is old news, but perhaps another 30-second spot: three of the four State Investment Council members appointed by Corzine in August 2007 had ties to Lehman Brothers, the investment bank whose bankruptcy cost the state pension fund more than $50 million: Jose Claxton was a managing director at Lehman before leaving at the end of 2006; Erika Irish Brown was Lehman's senior VP who ran their diversity recruiting division; and W. Montgomery Cerf worked for Lehman before joining JP Morgan. Another Investment Council member, Susan Ann Crotty, is married to David Lohuis, who was a Lehman VP and managing director. 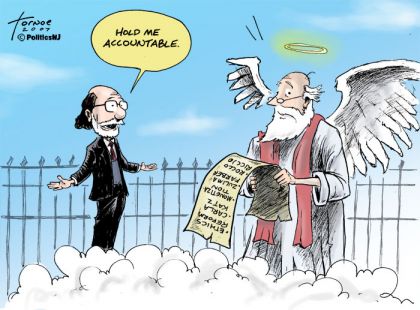